Brexit: the myth of a racist surge

The denigration of the white working class is the real prejudice of our age. 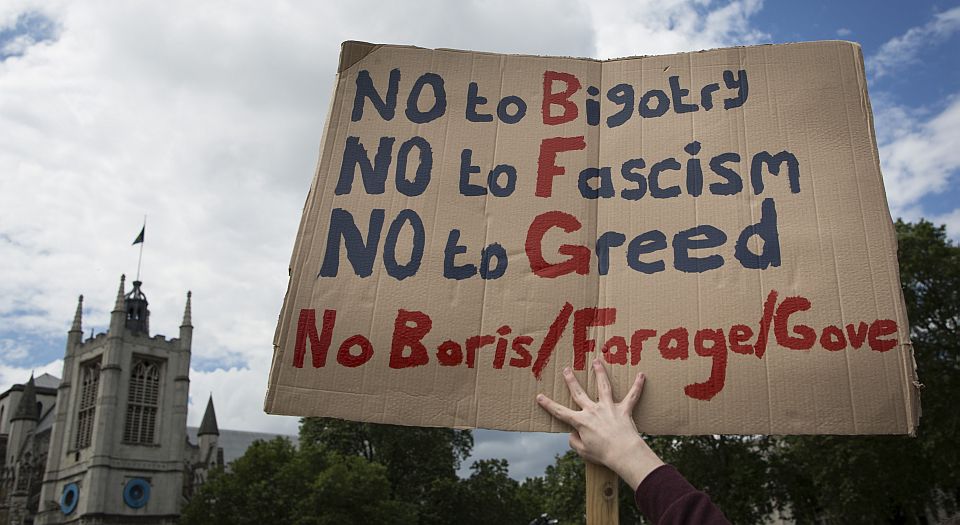 According to the Institute of Race Relations (IRR), the EU referendum result has ‘taken the shame out of racism’. To confirm this assertion, the IRR has been busy appealing to the public to send it reports of racist incidents. London mayor Sadiq Khan clearly shares the IRR’s concern. A few days after the referendum, he said: ‘I’ve asked our police to be extra vigilant for any rise in cases of hate crime and I’m calling on all Londoners to pull together.’ In turn, the Metropolitan Police have added apparent substance to the fears of Khan and the IRR. Between 24 June, the day the referendum result was revealed, and 2 July, the Met received 599 allegations of hate crime, a rise of more than 50 per cent on the weekly average.

So what’s going on? Has Brexit really brought out the racist enemy within? It certainly seems probable that the official Leave campaign’s focus on immigration may have emboldened a few migrant-hating racists. But there is another prejudice at work here, ramping up the fears and concerns of a racist surge. And that’s the prejudice, held by many in the metropolitan elite, against the UK’s white working class, the majority of whom voted Leave. They see this much-maligned social strata as bigoted, backward and, yes, racist. It therefore makes sense to the likes of the IRR or Khan that there will be a rise in racism post-referendum. After all, as they see it, that’s why so many white working-class people voted Leave in the first place: because they’re racist.

This prejudice predates the referendum result. Many Remain voters were firmly convinced that Leave voters were racist long before the actual vote. Hence the speed with which Remainers, post-result, sought out examples of ‘racism unleashed’ and reported them on social media. For example, on my own Facebook page the Monday after the result, someone posted a mobile phone snap of a smashed window at a Spanish tapas restaurant in south London. Its caption read ‘Spanish and Turkish restaurants in Lewisham had their windows smashed over the weekend. Very widespread reports coming in now.’ The post quickly received 1,833 shares. One commenter noted: ‘The ghost of Sir Oswald Mosley now stalks the streets of England.’

The same picture and caption soon appeared on Twitter. According to one tweeter, it showed ‘the rise of fascism across the country… linked to Brexit’; another said ‘fucking outrageous, this is what #Leave is about… cut the shit and admit it’; and the IRR itself asked, ‘is there any chance we could use your pic for a round-up of post-Brexit racial violence?’. The IRR was joined by reporters from the local and national press asking the same question.

But was the picture all it seemed? On a south London discussion forum, the picture prompted a great deal of discussion, before one contributor pointed out, ‘I’m no expert, but that looks like a robbery attempt’. A few other contributors then said that there had been a spate of botched shop burglaries in the area over the past few months. The Met have since confirmed what many were starting to suspect: ‘These offences are not considered to have a hate-crime motivation.’ Indeed, local Lewisham police have since said that there has been no spike in reported hate crimes since the Brexit vote.

Of course, the police may learn something new about this incident and decide that it does have a hate-crime motivation. We don’t know. But that’s the problem here. Too many are already convinced that racism is on the rise. And too many are therefore prepared to pre-judge an incident, in this case a smashed restaurant window, as confirmation of what they think they already know – namely, that we’re in the grip of some sort of post-Brexit Kristallnacht.

But there really is no racist surge. When respected organisations like the IRR suggest that the racism of the past has re-awoken in the present, they ignore the reality of modern, diverse Britain. ‘And now, just like in the 1970s’, states an IRR post-Brexit bulletin, ‘communities up and down the country are experiencing an upsurge in racist and fascist violence’. This is a grotesque distortion. Of the 72 entries listed in the IRR post-Brexit overview of ‘racially motivated attacks and other incidents of harassment’, only nine refer to actual violence. And included in that list is the broken restaurant window in Lewisham.

Let’s contrast today’s supposed racist upsurge with the racism of the 1970s and early 1980s. Racism then was visceral and everyday. And the engine room driving this racism was not hard to pinpoint, with politicians, police, magistrates and housing departments all playing their part in lending official sanction to racism. ‘There is no better way of heading off the nightmare of unified political action by the economically disadvantaged’, noted the left-wing philosopher Brian Barry at the time, ‘than to set different groups of the disadvantaged against one another’. On the street, racist intimidation and violence was commonplace, and, unlike today, far-right organisations enjoyed significant support. But then, with the emergence of a new generation increasingly at ease with ethnic diversity, things began to change for the better.

A study of British Social Attitudes (BSA) data, spanning the years 1986 to 1993, demonstrates this generational shift, revealing a sudden and pronounced decline in racial prejudice from the late 1980s onward. The 30th BSA survey, released in 2014, confirms the ongoing decline of racial prejudice. In short, the younger you are, the more likely it is that you live, love, work and collaborate with people of various ethnicities (indeed, you are more likely to be of mixed-ethnicity yourself).

At state level, the old-fashioned racism promoted by the elite 40 years ago slowly gave way to a new era of official anti-racism. But the new top-down anti-racism didn’t embrace the decline of racism in society at large. Rather, it reinstated racial thinking, and encouraged the belief that the everyday bigotry we thought had receded was really just lying dormant in the untutored minds of the masses.

This official anti-racism is a principal source of the elite’s fearful vision of the white working class today. It’s an insidious prejudice. Last week, for example, a friend reposted the testimony of a young black woman who described moving through a crowded London underground station on 28 June and overhearing herself described, for the first time in her life, as a ‘fucking nigger’. Her description of how this felt was eloquent and moving. But then she described the person who’d said those words: ‘She was pregnant, quite heavily, with empty, unimaginative Daily Mail eyes and a grim, hollow, unreachable stare, and she sat on the tube with her squinty, brittle, pockmarked husband and they downed a magnum of Smirnoff Ice and cussed and grumbled…’ The expression of love and solidarity in the countless comments beneath was heartening. But no one seemed to question her own unabashed stereotyping. It appears that denigrating the white working class is the sanctioned prejudice of our age. And, post-referendum, it’s a prejudice that too many freaked-out Remain voters find impossible to resist.

We need to distinguish between the hateful acts of a few and the perfectly legitimate grievances and aspirations of the majority who voted Leave. The emerging evidence suggests that immigration was less of a factor for Leave voters than many presumed. A post-referendum ComRes poll found that only 34 per cent said immigration was their main concern, with 53 per cent citing the ‘ability of Britain to make its own laws’ as their overriding concern. And the think-tank British Future, in the course of post-referendum research, found that 84 per cent of the electorate, including 77 per cent of Leave voters, want to protect the status of EU migrants in the UK. This was not a racial vote. Dismissing the votes of 17.4million people as driven by racism is the real act of prejudice here.

Adrian Hart is a writer and researcher. His most recent book, That’s Racist!: How the Regulation of Speech and Thought Divides Us All, is published by Societas. (Order this book from Amazon(UK).)