Jupiter was once considered a god; this mission proves we’re mightier. 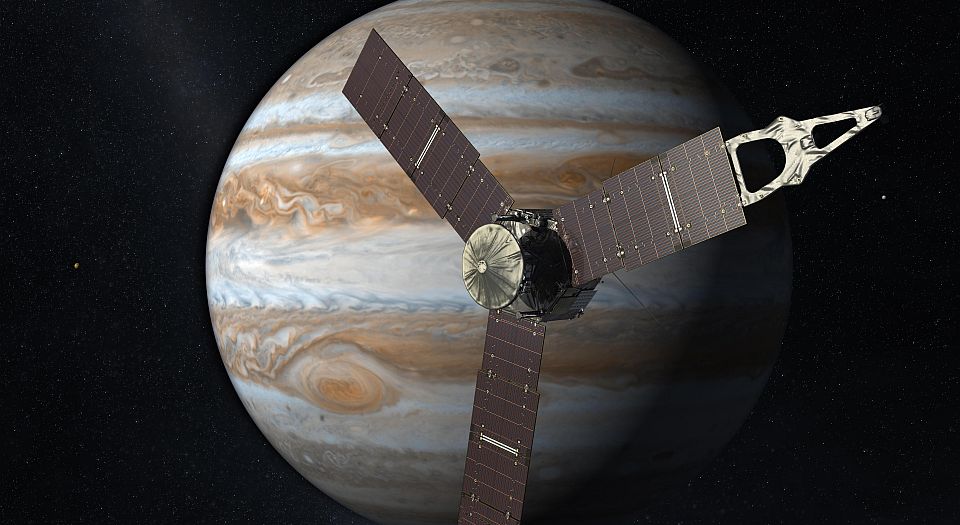 Almost five years after setting out on its 1.8 billion-mile journey from Earth, the Juno probe has made a near-perfect entry into Jupiter’s orbit, and is now ready to observe and analyse the gas giant. But, with all that’s happening here on Earth, why should we care what’s happening on Jupiter?

All ancient cultures had their own thunderous god of the sky; the omnipotent king of the universe flashing lightning from his hands, to whom all other divinities bow. He personified the mysteries of the heavens. He was called Jupiter by the Romans; Thor by Germanic tribes; Marduk by the Babylonians; and Zeus by the Ancient Greeks. All of these cultures associated him with that brightest ‘star’ in the night sky – Jupiter.

Jupiter, the oldest planet in our solar system, weighs more than twice as much as all the other planets combined. Were it only 80 times heavier, it would become a star itself (as happens in Arthur C Clarke’s 2010). Indeed, it acts like its own solar system – it has 62 moons. The largest of them, Ganymede, is bigger than Mercury, and its motion gave birth to modern science when it provided proof of Copernicus’s theory. Another moon, Europa, is considered by scientists to be the best candidate for extraterrestrial life.

Jupiter was crucial to the formation of Earth because of its gravity field, which also controls how the comets come and go, and without which the Voyager probe would have been unable to make its epic journey. Yet despite Jupiter’s immensity, its days are only half as long as Earth’s. It even has its own ring system, like Saturn. But the most amazing wonder of all surely has to be its Great Eye, the famous Red Spot: a storm three times the size of Earth that has been raging since the Great Fire of London.

Jupiter is the dark jewel in the celestial diadem, but despite being visited by eight spacecraft, it still shrouds itself in mystery, just like its divine namesake. For example, we know Jupiter is a great big ball of gas with trademark cloud belts of ammonia tearing across its surface, raining liquid methane downpours. But what’s inside? By using the Juno probe to make highly accurate measurements of minute disturbances in Jovian gravity, we will be able to work out the size and density of Jupiter’s core.

One of the tiny probe’s first jobs will be to witness the planet’s Northern Lights. Careful measurement of these aurorae will yield knowledge of Jupiter’s magnetic field, and not only add to the information on the core but hopefully offer a final explanation of what causes the mysterious field.

The perennial question is where we might find water elsewhere in the solar system. By analysing the absorption of microwaves, Juno can tell us the water content of Jupiter. This will unlock the secret of which of the current set of models of planetary formation is the correct one. So, by knowing how Jupiter came to be, we will get firm answers on how we came to be.

If Jupiter is the symbol of superstition, mystery and absolute power, then the Juno mission symbolises the tradition started by Galileo when he first dared to raise his homemade telescope to meet the gaze of the old gods. When Juno completes its mission in February 2018, diving into Jupiter’s atmosphere, it will leave behind a beautiful new symbol of what humanity is all about. It will be a needle in the Great Eye of Jupiter, the planet once thought of as the god of gods. This mission proves humanity is mightier.