Chilcot: the worst kind of whitewash

You think we know the truth about Iraq? Think again. 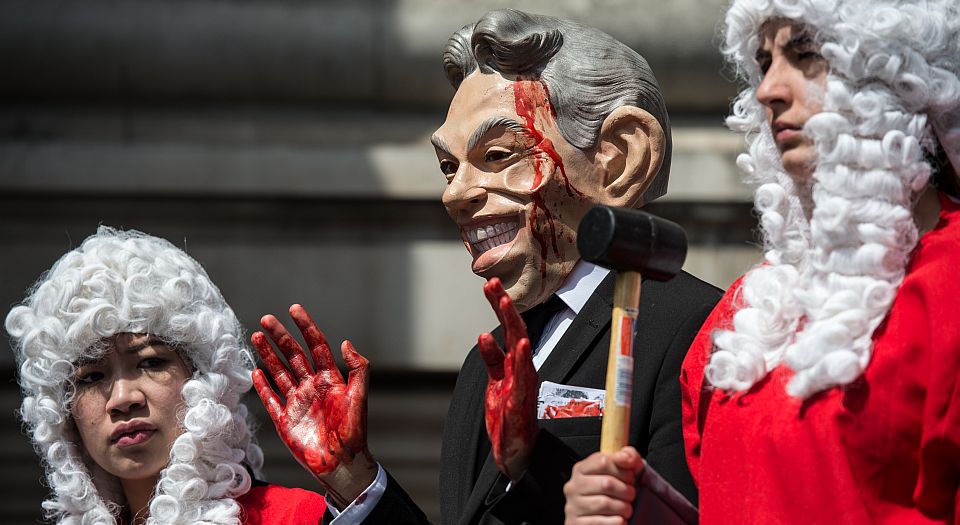 ‘Phew, it isn’t a whitewash.’ That’s what everyone is saying about the Chilcot report. It doesn’t hold back on Blair, it gives him what-for, and it lays out in gory detail the intelligence failures behind Britain’s part in the Iraq War of 2003. ‘This is a very, very damning verdict’, says the BBC’s Laura Kuenssberg: ‘If people were worried this would be a whitewash, it is not.’

Only it is. It’s the worst kind of whitewash. It’s a political whitewash, a moral whitewash, an historical whitewash. In giving the chattering classes what they so desperately craved — hard evidence that Blair is wicked and his warmongering was a disaster and they are right to hate him now — Chilcot and the circus around it wrenches the Iraq War from its historical context and turns it into the psychodramatic folly of a hubristic has-been. In doing so, it utterly washes away the context in which the war could take place.

The response to Chilcot confirms the extent to which Blair has become the voodoo doll of a certain section of the political and media elite, into which they can shove pins in the hope of making themselves feel better. Whatever the narrow remit of the Chilcot Inquiry — to examine officials’ decision-making process both before and after the invasion — it was clear from the very beginning, and it is especially clear today, that it would play the far larger political role of confirming the sinfulness of Blair and the righteousness of those media and political types who, having fawned over him in 1997, now hold him responsible for every ill afflicting the Middle East, Labour and Britain itself. The hope was always that Chilcot would copperfasten the middle classes’ Blair-bashing narrative: the idea that this one, brash, well-spun man corrupted Labour, soiled politics and visited destruction upon Iraq.

And they’ve got what they wanted. They’ve got the wise, lawyerly confirmation of Blair’s nastiness and, by extension, their own decency. ‘Blair will never escape the shame of Iraq’, hollers Labourish tabloid the Mirror. ‘It was Blair’s war, so it is Blair’s sick, awful calamity’, it says. This is echoed everywhere. Blair lied, Blair destroyed Iraq, Blair turned Labour into something evil, and so Blair must pay, Blair must be shamed, Blair might have to be dragged to The Hague. Get Blair, hammer Blair, imprison Blair: this is the cry of the chattering classes, of those who in 1997 just as madly hailed Blair as a ‘messiah come to save us from Toryism’.

If this hysterical Blairphobia sounds too simplistic to be true, that’s because it is. It is a cover-up of its own. This feverish hunt for the one thing, the one man, we might hold responsible for Iraq and Bad Things in General has the terrible effect of dehistoricising and depoliticising the war. It ignores what politics came before it, and what politics has come after it. It overlooks the fact that, from the moment he took power in 1997, and with the glowing approval of the vast majority of the liberal press that now hates him, Blair and his New Labour team pushed the idea of humanitarian interventionism. It overlooks the wild cheers that greeted Blair’s Chicago Doctrine, outlined in a speech in 1999, which said that when a foreign leader is behaving badly, ‘the principle of non-interventionism [should] yield to the international responsibility to protect’. It forgets the New Labour government’s bombing of Yugoslavia in 1999, which the media were solidly behind. ‘If you want to know why the public supported the war [on Yugoslavia], thank a journalist’, said Channel 4’s Alex Thomson. It utterly shuns the fact that in the post-Cold War West of the 1990s and 2000s, the hunt was on for a new sense of mission for our at-sea elites, and they discovered it overseas, in the wreckage of other people’s wars, where from Yugoslavia to Afghanistan to Iraq and beyond our leaders could engage in simplistic moral/military dramas in an attempt to fortify their own flagging legitimacy at home.

In short, the treatment of Iraq as special, and Blair as uniquely bad, and bloodthirsty, does a grave disservice to history — to understanding the causes of the Iraq War, the ideas behind it, the role played by vast swathes of the political and media elite in cultivating the climate in which it could happen and the notion that Britain had a new, neo-imperialist role to play in rescuing the repressed peoples of the world. It tears Iraq from this political and historical continuum, it elevates it above the elite’s consensual creation of a new kind of interventionism, and treats it as a one-off act of madness that sprung from Blair’s warped mind and black heart. It’s a whitewash of the worst order.

At the most basic level, we seem to forget that 244 Labour MPs voted for the Iraq War. And 139 Tory MPs. And that since then, vast numbers of MPs have voted for other disastrous interventions: cravenly, with spectacular conformism, 557 MPs, against a measly 13, voted to bomb Libya in 2011. That intervention unleashed untold mayhem in Libya and beyond and North Africa is still reeling from it. Are those 557 MPs evil, too? When will they be inquired into, ridiculed, dragged to The Hague? They green-lighted horrors, as Blair did.

spiked is no fan of Blair. And we were implacably opposed to the Iraq War. We knew as early as 2002 that there was no evidence whatsoever that Iraq was a threat or that invading it would deliver peace to the Middle East. But right now, this Blairphobia, this cynical transformation of the Iraq disaster into a theatrical stage upon which the British political elite might demonstrate its post-Blair goodness, is repulsive. The important, humane task of understanding the history and politics of that calamity in 2003 has been sacrificed at the altar of allowing a needy elite the space in which to say: ‘Blair is evil, and I am good.’