Jo Cox: don’t use this tragedy to tame democracy

The media’s exploitation of Cox’s murder marks a new low. 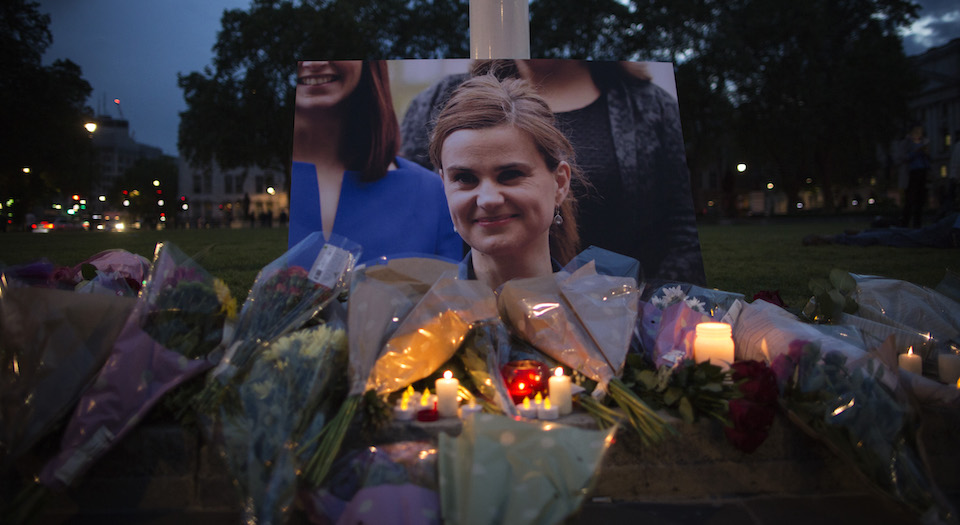 The spirit of democracy was dealt two blows yesterday.

The first came from a warped killer, Thomas Mair, whose assassination of Jo Cox was a horrific assault not only on a defenceless citizen but on a committed, engaged MP who was in the process of talking to her constituents. That awful act ended a good, promising life, and it also took a bloody shot at the openness, the freedom of engagement, that democracy requires in order to thrive.

The second blow came from more respectable quarters. It came from ghouls in the media and political classes who, with nauseating speed, and a remarkable lack of shame, have sought to exploit Cox’s death for political gain; who swiftly blamed the murder on the Brexit lobby (Cox was pro-EU and pro-migration, and it’s suspected her killer was anti both those things); and who have marshalled Cox’s death to the cause of sanitising political speech and insisting that certain views no longer be openly expressed. The blow against the spirit of democracy dealt by these cynical tragedy-milkers was less horrific, but it could prove to have a longer-lasting and more dire impact on free debate.

The speed with which broadsheet journalists and people of a Remain persuasion seized upon Cox’s murder as a means of challenging their opponents was alarming and horrendous. Her body was barely cold before the Twitterati, including influential writers, were citing her killing as evidence that Brexit has unleashed atavistic sentiments that have cultivated a foul political climate in which violence can stew.

Then came the columnists, disrespecting the dead by using her as a ventriloquist’s dummy to express their political concerns. Under the headline ‘The mood is ugly, and an MP is dead’, the Guardian’s Polly Toynbee said this ‘referendum campaign’ has made the air ‘corrosive’. She doesn’t mean her side in the referendum campaign; she means the other lot, the disgusting lot, the Leave lot. ‘Leave and their media backers’ have created a ‘noxious brew, with dangerous anti-politics and anti-MP stereotypes’, she says. Seeming to suggest that Leave supporters are the political equivalent of insects, she says the leaders of Leave have ‘lifted several stones’ and let out a ‘rude, crude, Nazi-style extremism’. The irony of it: accusing her opponents of being like Nazis while using insect-like terminology to denounce them.

Within one hour of Cox’s death being announced — one measly hour — the Spectator’s Alex Massie was writing about her death as a consequence of Leave’s ‘rhetoric’. Her death makes sense, he suggested, in a climate in which we have UKIP opposing mass migration and Leave campaigners implying that Britain’s sanctity is at stake in the EU referendum: ‘When you encourage rage you cannot then feign surprise when people become enraged.’ He says that of course Farage and others aren’t directly responsible for this murder, ‘but…’. That wretched ‘but’, which really means ‘but they are responsible’; which says, like every censorious argument in history has said, that if you don’t silence yourself, if you don’t repress your heretical ideas, then people will suffer as a consequence. Moral blackmail disguised as political commentary.

Even before the facts were clear, politicos had spotted in Cox’s killing an opportunity to demonise their opponents. Neil Coyle, Labour MP for Bermondsey, accused Leave of ‘inspiring extremist elements’. A Guardian editorial, published with post-horror haste, discussed the murder in the context of Leave’s ‘divisive and nasty’ politics. It slammed the ‘merchants of post-truth politics’ and said they’re now pushing a ‘post-moral politics’, too. Never mind that it is still not entirely clear what Mair had been reading and thinking (though he certainly appears to have had far-right sympathies), and that it seems he has serious mental-health problems: facts don’t matter when your sole aim is to use a tragedy to silence your opponents. And the Guardian has the temerity to call others ‘post-truth’.

The message is this: if you are anti-EU — or worse, anti-immigration — then you played a part in creating a climate in which an innocent woman could be murdered. This creeping criminalisation of certain ways of thinking, of certain people, is likely to have a chilling effect on honest, democratic debate; indeed it is designed to. The instinct for sanitising debate, and pushing certain ideas, and certain people, back under Toynbee’s stone, has become more pronounced in recent hours. A Twitter campaign to #ThankYourMP has taken off, accompanied by demands that we be more pleasant towards the political class. Opinion-formers say we must now create a ‘nicer’ politics. A Telegraph writer says stinging criticism of ‘the elites’ or ‘the establishment’ has helped to ‘dehumanise the individual, encourage brainless paranoia, poison us with suspicion, and provoke some to hate’. So within hours of Cox’s death, an authoritarian cry has gone out: be less rude about the establishment, go easier on our rulers, silence your anger. The long-existing censorious instinct of much of the media and political class is now being pegged to the murder of Cox. That is grotesque.

The exploitation of Cox’s killing is terrible for so many reasons. It’s disrespectful. It’s cynical. It’s ghoulish. It seeks to demonise, and silence, views the mainstream media don’t like. It diminishes the killer’s culpability by suggesting the ‘political climate’ pushed him to do it. And it responds to a murderous attack on a politician by proposing the further weakening of politics. Absolutely the worst response to this killing of a democrat would be to have less debate, less anger, less ideological clashing — things that are the lifeblood of the democratic process. To sanitise politics in memory of Cox would be a disservice both to her and to democracy itself, which by its very nature must permit and in fact encourage the expression of all views – even those held by what the media elite views as disgusting people who live under stones.