The Orlando massacre and the crisis of humanism

The West lacks the moral resources to resist ISIS. Let’s change that. 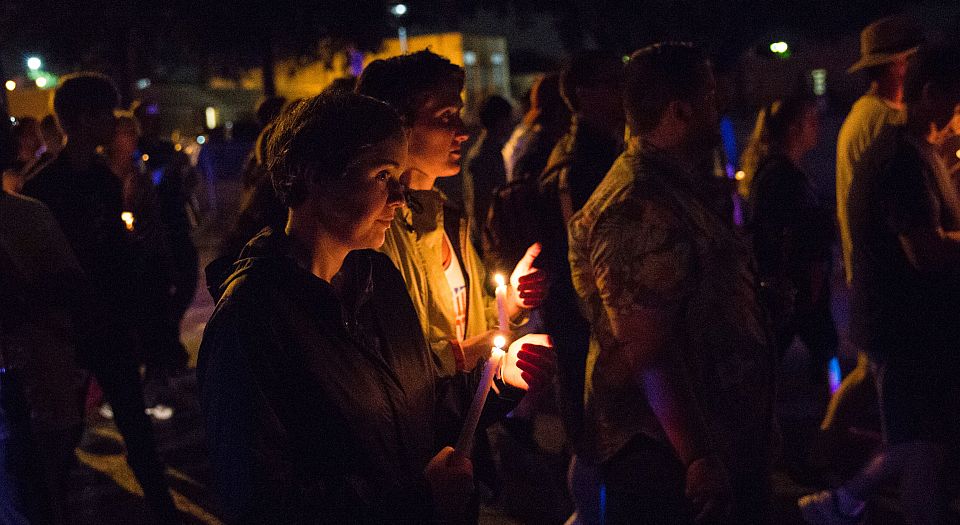 The massacre in Orlando reminds us that there are wicked individuals who will mow people down simply for the ‘crime’ of being gay. It confirms that Islamist violence, fuelled by a profound intolerance of anyone who dares to live freely or irreligiously, is a pressing problem in the 21st-century West. But most tragically of all, it has revealed a deep crisis of humanism in the West. The response to this act of barbarism has exposed the fracturing of human ideals, of the very notion of a human family, and of the West’s commitment to trusting individuals to live as they please, to be sovereign over themselves, regardless of who it offends. The awful truth unveiled by the obscenity in Orlando is that we in the West lack the moral armoury and collective spirit to withstand Islamist intolerance.

The most striking thing about the reaction to Orlando is how speedily observers made it about themselves; how swiftly they marshalled this massacre to political ends, whether to the traditional political ends of promoting right or left agendas or to the ends of the new politics of identity and its obsession with cultivating narratives of victimhood. The bodies were still warm when political ghouls on the left were claiming the massacre as proof that we need greater gun control and clampdowns on homophobia, and political ghouls on the right were using it to push their case for greater border controls and clampdowns on Islamist speech. From across the spectrum, people used the remains of that blood-stained gay club as a foundation for the construction of their shallow political case: a deeply ugly spectacle.

Even worse, and more revealing, has been the response of the identitarian lobbies. With astonishing speed, and more than a little narcissism, gay leaders and commentators used the massacre to shore up their greatly prized victim status in the realm of identity politics. This is why the post-massacre discussion quickly descended into a petty clash over terminology: over whether this was a ‘hate crime’ that speaks to a general climate of homophobia, or an act of terrorism, against gays, of course, but speaking to a specific Islamist ideology fuelled by foreign ideals. Numerous gay opinion-formers have fought hard for the first interpretation, for the hate crime / homophobia narrative, with some even speaking of the massacre in the same breath as Christian opposition to gay marriage – as if believing marriage should be between a man and woman is on a par with, and perhaps even fuels, the massacre of gay revellers. The censoriousness of such moral equivalence, the moral blackmail of it, is alarming.

It’s pretty clear why gay opinion-formers are elevating the ‘hate crime’ take over the Islamist issue. Firstly, because it allows them to avoid hard political questions about ISIS, about the killer’s ideological motivations, which are a whole moral universe away from the outlook of the baker who doesn’t want to make a gay-wedding cake. And secondly because reading the massacre in this way, exploiting it in this way, allows gay activists to fortify their victim status. In the world of identity politics, victimhood is the chief currency; you win recognition, and moral resources, through demonstrating your fragility. This means identity politics doesn’t only give rise to communal blocs in place of human solidarity – it also stokes up competitive victimhood, with black, Muslim, trans, gay and other sectional grouplets continually seeking stats or using relatively rare occurrences to boost their claims to existential brittleness. The use of the Orlando massacre to buttress the victim politics of the gay-rights movement is no less cynical than the use of it to slam immigration.

This PC sectionalism cuts to the heart of the crisis of humanism. Witness how some are policing the media coverage to make sure everyone says it was a gay club that was attacked and are demanding that more LGBT voices be given a platform to talk about the massacre. The idea is that gay people feel this assault, understand it, more than straight people do. As one British newspaper columnist angrily said to a news presenter who suggested the massacre was an attack both on gays and on the West: ‘You don’t understand this because you aren’t gay.’ Behold the new communalism. Only blacks can empathise with black pain, only women can challenge misogyny, only gays can truly feel the horror of Orlando. You must have experienced something to know it: an alarming negation of the ideal of human empathy. It’s an explicit disavowal of universalism, of human solidarity. We all live in ethnic or gender blocs now, competing with other blocs for official pity, and insisting these other blocs will never know how we feel: the tragic fraying of humanism.

Consider how extraordinary this is: in less than 48 hours, the Western response to a horrific massacre of our fellow Westerners, of our fellow democratic citizens, became bound up in divisive discussions over terms and jealous efforts to ‘own’ the massacre. Where once we might have responded to such an act with human empathy, and with a determination to come together to insist on the right of all people to live as they please, now we fight over who has the greatest moral claims on the massacre; we police emotional reactions. Clearly, tragically, sectionalism is winning out over solidarity in this era of identity politics. In this sense, the Orlando massacre confirms not only that people who have sworn allegiance to ISIS are more than willing to attack the innocent, free citizens of the West, but that we in the West lack the moral, humane resources necessary to stand up to a threat like ISIS and defeat its awful ideology. A fractured public, divided from one another, eschewing common values in favour of the narrow politics of experience, cannot truly stand up to the menace of intolerance. Our frayed humanity is no match for this anti-human ideology. In fact, it unwittingly feeds that ideology.

In a perverse irony, ISIS supporters in the West feed off the very same sectionalism that we’ve seen in response to Orlando. They, too, are motored by a valuation of their identity above all else: by a view of themselves as Muslims rather than citizens, and by a grating sense of victimhood, a belief that the world is out to get them. Indeed, Orlando can be seen as the terrorism of identity politics, a disgusting expression of the inexorable shoving of everyone into a cultural, ethnic or religious box, and of the spite, division and envy such a process inevitably inspires. Our weakened ideals inflame the ISIS desire to weaken us further.

Enough. Our response to Orlando should be a human one, a renewed determination to defend humanist ideals against murderers and misanthropes who seek to slay them. Let us now fight harder than ever for the value of human solidarity, and for the greatest humanist ideal of all, the one most under threat from both Islamists and identitarians in the 21st-century West: that people should be free to think, say and live as they please, regardless of who it offends.