It’s not the economy, stupid. It’s a fight for democracy

On the EU, ignore the expert and trust the public, says Frank Furedi. 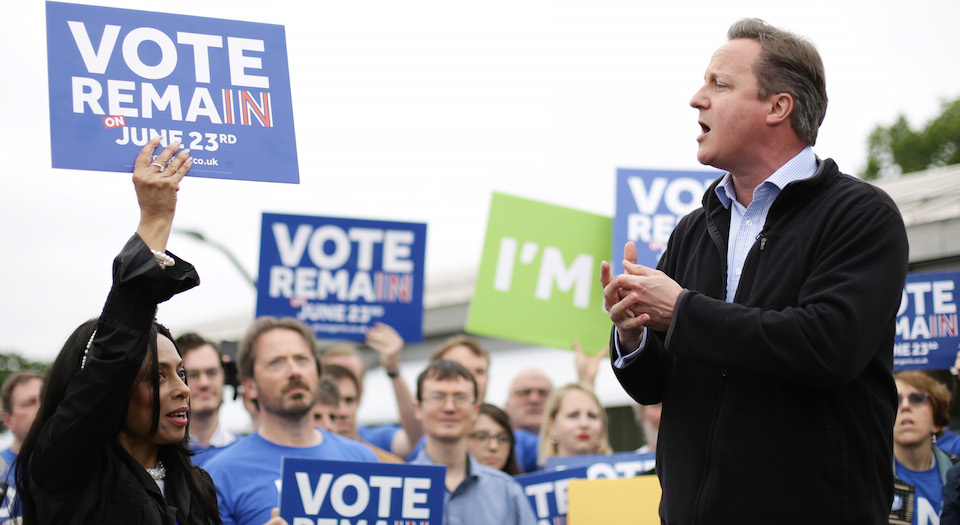 I’m starting to get used to a visceral reaction of contempt, tinged with a look of condescension, whenever I say I am in favour of a Brexit.

It’s as if people cannot imagine that a university professor could really believe that Britain should take its national sovereignty seriously. At public lectures and debates I have taken part in in recent months — in Amsterdam, Bratislava, Brussels, Budapest and London — I have not encountered a single academic who has anything other than contempt for the misguided fools planning to vote for Brexit. Actually, that’s not totally true. After one of my talks, a young English academic quietly pulled me aside and told me that she agreed with the views I had expressed. Her whispering confirmed my fear that, for a significant section of academia, supporting Brexit is the equivalent of committing a hate crime.

From a sociological perspective, I find it fascinating that the apparently enlightened sections of society have developed a hardened conviction that supporting the EU is the only decent thing to do, and that those who favour a Brexit threaten to return Europe to the bad old days of the 1930s, whether consciously or unwittingly. Even more intriguing is the fact that their contempt for Brexit voters is rarely made explicit in public debate. If Sigmund Freud were still around, he would diagnose their approach to the EU debate as a big displacement activity. Their sense of anxiety about the unpredictable behaviour of the mass electorate is sublimated through the EU discussion; and they seek to temper foolish passions by channelling the whole debate towards technical issues linked to the economy.

When the EU referendum was announced and the debate really kicked off, it wasn’t immediately clear why so much attention was devoted to economic issues. On closer inspection, however, it became evident that it is this myopic focus on economics that has allowed the main protagonists to evade fundamental questions relating to values, cultural differences, insecurities and, above all, the issue of national sovereignty. National and, even more importantly, popular sovereignty is not an issue that the EU elites feel comfortable discussing in front of the public. They know that on this question they are out of touch with the mood of the people — which is why their instinct is continually to turn the discussion towards technical economic issues. What is referred to as the Remain camp’s ‘Project Fear’ is not simply about scaremongering — it’s about trying to displace wider political and cultural concerns with a focus on economics. The fatalistic vision outlined by Margaret Thatcher — ‘There Is No Alternative’ — is the inspiration for the displacement strategy of the EU oligarchy and its supporters.

The demos: an inconvenient fact

The current debate confirms that elitist disdain for the demos is as alive in the 21st century as it was in ancient times. ‘If there are issues on which the populace at large should be trusted to vote, something as complicated and economically sophisticated as EU membership is definitely not one of them’, says the biologist and professional atheist Richard Dawkins. As far as he’s concerned, complicated issues are way beyond the intellectual capacities of ordinary people, and therefore allowing a vote on such matters is a violation of the natural order of things. Dawkins is communicating a patronising disdain for the apparently easily manipulated masses.

Anecdotes about the stupidity and irrationality of voters speak to a view of democracy as an inconvenience that very intelligent people like Dawkins have to put up with. His argument echoes the rhetoric that says, ‘I am a democrat, but…!’. As he says: ‘I’m a democrat, but we live in a representative democracy, not a plebiscite democracy.’

Dawkins’ claim that the electorate is unable to handle complex issues is the same justification used by EU bureaucrats to dismiss the views and opinions of the public. Whenever people have rejected an EU proposal in a referendum, the standard response of the Brussels-based oligarchy has been to hide behind the wall of ‘This is a complex issue’. In response to a vote on the EU Constitution, Margot Wallström, the EU’s then vice president, said this question is a ‘complex issue to vote on’ and thus it can confuse many citizens, who may ‘use a referendum to answer a question that was not put to them’. The fear that citizens will give answers of their choosing — imagine that! — drives the thinking of the ‘I’m a democrat, but’ brigade.

The logic of Dawkins’ and Wallström’s outlook is to limit democratic debate to parochial issues, like how much money should be spent on parks or waste disposal in local communities; apparently we should leave the big, complicated questions to the experts. Their preference for the authority of the expert over the view of the public builds on the anti-democratic tradition that evolved during lively debates in the agora of Ancient Greece. No sooner was the demos given a voice than there emerged critiques of democracy. Plato, for example, would have approved of the attitudes of Dawkins and Wallström.

Plato, through the mouth of Socrates, offered an early version of the complaint about the wishes of the people having to be taken into account when deciding on the future of the polis. Speaking up for the authority of experts, Socrates noted that the assembly in Athens always consulted experts, and ignored non-experts, on technical matters like shipbuilding and engineering. So for him, it made no sense to consult people who lacked expertise in politics when it came to issues of public life. He said:

‘But when it is something to do with the government of the country that is to be debated, the man who gets up to advise them may be a builder or equally well a blacksmith or a shoemaker, a merchant or ship owner, rich or poor, of good family or none. No one brings it up against any of these, as against those I have just mentioned, that here is a man who without any technical qualifications, unable to point to anybody as his teacher, is yet trying to give advice. The reason must be that they do not think this is a subject that can be taught.’

Socrates had little time for the verdict of the people on matters to do with the governance of Athens, and he had no inhibitions about making his anti-democratic views clear. His honesty on this subject stands in sharp contrast to the evasive rhetoric of his epigones in Brussels.

There’s no doubt that the electorate often makes wrong choices. It’s true that a referendum provides opportunities for demagogues and unscrupulous politicians to simplify issues and seek to manipulate public opinion. But the possibility that exercises in either direct or representative democracy sometimes go wrong is not an argument against democracy.

Genuine democratic debate is inherently risky because there are no guarantees about the outcome. But it’s a risk well worth taking, because it is only through participation in democratic debate that citizens can acquire meaningful moral and political responsibility, and that we can develop the spirit of freedom that keeps public life healthy. In a democracy, what matters is not just the outcome but the participation of the citizens in debates on the future of their communities. It is when the public is taken for granted, or ignored, that the real problems kick in.

It is in the writings of the Renaissance humanist and philosopher, Niccolo Machiavelli, that we find one of the earliest arguments for taking seriously the views of the public. Machiavelli is popularly known for advising his prince to use fear to control a fickle, greedy public. But what is often overlooked is that Machiavelli also believed in the freedom of people to express their views. In his chapter ‘The Multitude Is Wiser and More Constant Than a Prince’, which appears in his Discourses on Livy, he drew on the experience of Rome and concluded that the multitude is no less wise than the Ruler. He dismissed those who claim that the multitude is likely to get things wrong and says that such a defect ‘can be attributed to all men individually and most of all to princes, for each person who is not regulated by the laws will commit the very same errors as an uncontrolled crowd of people’.

For Machiavelli, what matters is that people are governed by the rule of law. In these circumstances, the public can develop considerable truth-finding potential, he believed. ‘As for making judgments, when the people hear two opposing speakers of equal skill taking different sides, it is only on the rarest occasion that it does not select the best opinion and that it is not capable of understanding the truth it hears’, he wrote. Machiavelli suggested that, on the big questions, the multitude was far more likely to get things right than an individual or expert. What was really important was not his faith in the people but in the people’s potential for developing an ability to consider and decide upon what was in the best interests of the community.

The early humanists of the Renaissance emphasised the importance of activating public life through living democracy and freedom. Even at this early point in enlightened human history, they realised that on major questions in particular, the people were more likely to make a wise choice than experts were. Moreover, the experience of genuine public deliberation would provide communities with a legacy they could draw on in the future. In relation to the EU debate, ignoring the opinion of the expert and relying on the wisdom of the people is the precondition for maintaining and deepening our democracy.