A Top Gear for our times

The post-Clarkson show is PC, inclusive and bland. 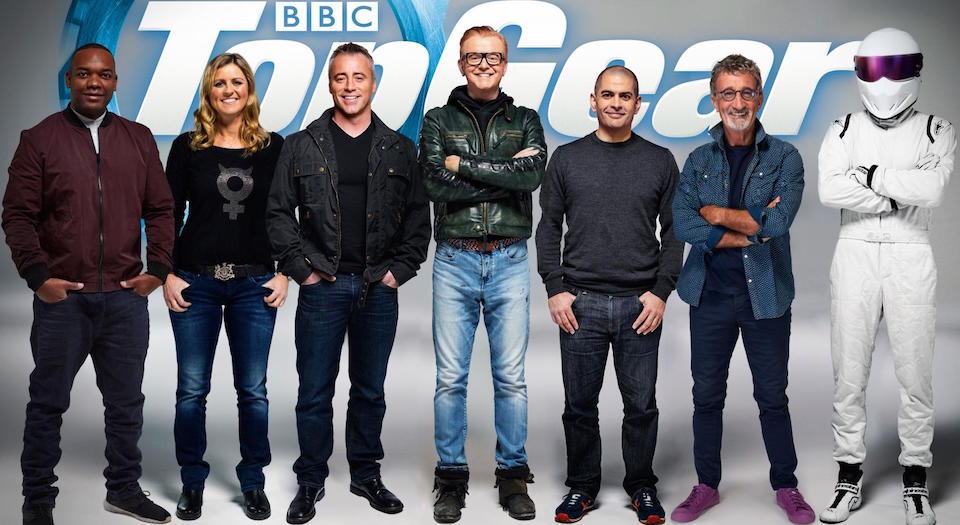 Many factual television shows have in recent years sought to emulate the success of Top Gear by co-opting its format: fill a studio with grinning members of the general public, make the presenters stand up and walk about, bring on some celebrities, cue to an outdoors shoot with silly pranks. Ensure a general atmosphere of merriment and levity that assures viewers the subject matter isn’t being taken too seriously. Bingo. Witness the format in action with Bang Goes The Theory, Stargazing, last year’s excruciating Wimbledon 2Day and Springwatch 2016 on BBC2 this week. Now, the latest programme to succumb to this trend is Top Gear itself.

That’s what Top Gear without Jeremy Clarkson, James May and Richard Hammond feels like: an imitation of itself, a poor photocopy. The theme tune was there, as was the gormless audience, the Stig, the celebrities and the hijinks. Yet it was all change with the presenters – relentlessly upbeat Chris Evans and Matt LeBlanc, who finds Britain strange, which I suspect is going to be the running gag. Sure, both stood up and walked about. Then they drove up a hill. But where was the chemistry, the fun and the offensive innuendo of their predecessors? I suppose this is what it feels like when a friend has a sex change: he or she is simultaneously the same person but not the same person anymore. The postmodernist philosopher and avid TV viewer Jean Baudrillard would have been fascinated by the simulacrum presented to us on Sunday night.

The hyperactive Chris Evans was in his element in TFI Friday, when the viewing public at home was mostly pre-loading booze for a night-out. His whooping and hollering are suited, too, to morning radio when people seek a rude awakening. But his loud, ceaseless joviality on Top Gear is wholly unsuited to languid, melancholic Sunday nights, especially in a spot where the viewers have come to expect the laconic deadpan and irreverence of Clarkson and the rest.

As its loyal viewers recognised years ago, Top Gear in its 21st century incarnation was never principally about cars. It represented a quiet insurrection against the sanitisation and conformity of our culture, one that had become risk-averse, afraid to be offensive, or to say the wrong thing in public. Jeremy Clarkson’s ostensibly xenophobic, homophobic and misogynist humour belongs not to the tradition of old-school, stand-up comedy of the 1970s, which alternative comedy and political correctness subsequently dictated was wrong. Rather, Clarkson belongs to that Viz comic strain of humour, of saying things deliberately to provoke and ridicule an establishment that decides what is acceptable to laugh at. No wonder the BBC ached for years to be rid of him.

It’s early days with this new Top Gear, of course, and all new programmes have teething problems, but I don’t believe matters will improve. Evans has said he wants none of the childish, politically incorrect humour in the show. In other words, Top Gear is to become chummy, inclusive and bland.

The BBC has no rebels anymore. It has become a monoculture (I mean, every left-wing media outlet needs its token right-wing irritant, right?). In our current culture of Safe Spaces, monitoring ‘hate speech’ on social media and arresting people for slogans on their t-shirts, the new Top Gear represents the present and future state of Western culture: inoffensive, emasculated and tamed.

Now that the much-lauded Australian women’s football team, strongly fancied for a gold medal in this summer’s Rio Olympics, have been beaten 7-0 by an under-15 boys team from New South Wales, can we dispense with the pious fraud that women’s football is on the same level as the men’s game?

Women’s football may be as entertaining as the men’s game, its players at the top level just as committed, and every woman has the right to play soccer, even the heterosexuals. But what is objectionable and embarrassing is the pretence, often propagated by the BBC, that it is equal to the male game. The pretence is especially cringeworthy when articulated by those ‘speaking as a feminist’ men whose main priority is self-glorification or sexual conquest. Women’s football is manifestly not as popular as men’s, because males, to employ arguments of outrageous biological determinism, tend to be bigger and stronger than females.

This is why men and women used to compete in different categories in the Olympics. Not anymore. This Olympics will be the first to allow transgender athletes, who haven’t undergone surgery, to compete in their preferred gender category. Expect an abundance of XY chromosome gold medallists. I’m sure all feminists will hail this as a victory for women’s equality.

The problem with prisons

Students’ unions are the gifts that just keep giving, especially if you work in the media and you’re in search of a story that fits the left-wing loony box. In days of yore, the newsroom on a slow day would instead reach for a story about inner-city councils banning bin bags for being racist, or nursery rhymes such as ‘Baa, Baa, Black Sheep’. Many of these stories about loony-left councils weren’t true, and I add a note of caution about stories concerning students, because I work among them a lot of the time. To tar them all as shrieking, censorious Safe Space fundamentalists is becoming the norm, and it’s unfair.

This week’s student news is a motion passed by the NUS Black Students conference to abolish prisons on account of them being ‘racist and sexist’. Superficially, it’s a ludicrous call. Prisons obviously work when they make people think twice about committing a crime, for keeping dangerous criminals off the streets and for containing repeat offenders. The only section of society prisons discriminate against are what we might call the criminal community.

The modern prison system, however, as devised in the 19th century, designed not just to punish people but to reform them, is a failed experiment. Who could argue with the NUS motions when it states that ‘prison does not work’ and that almost 60 per cent of prisoners re-offend in less than 12 months. Prisons have always been universities of crime.

A better deterrent might be corporal punishment, or to put people in the stocks. It would also be cheaper, but intolerable. No civilised person would welcome the notion of state-sanctioned violence. But is state-sanctioned abduction and kidnapping, in the form of imprisonment, any more enlightened?