Why it’s been such a slog for Hillary

Her troubles expose the disarray of the Democratic elites. 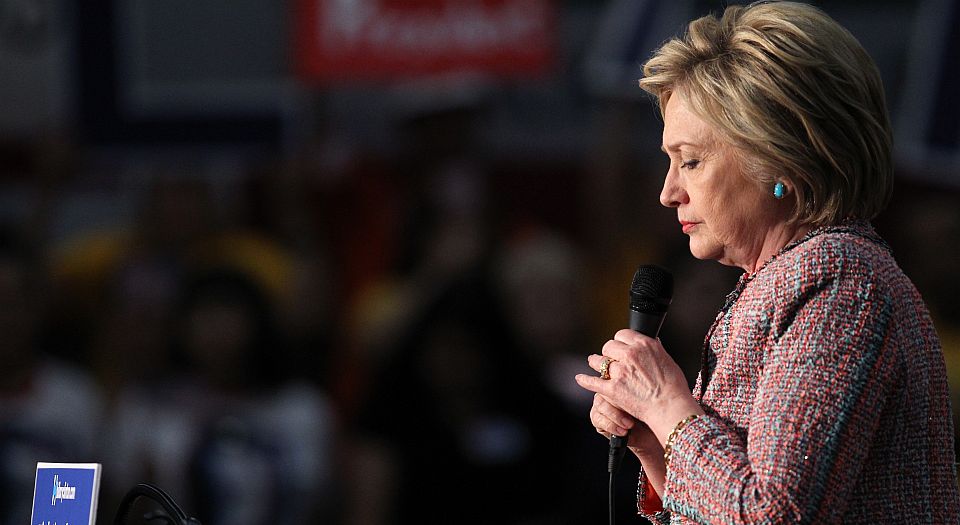 ‘I will be the nominee’, said Hillary Clinton recently. Yes, she will be, barring criminal charges over her emails (something that remains unlikely, even following the damaging report from the State Department’s inspector general). But her march to the nomination has been a long, joyless slog, and a journey that has only underlined the flaws in her candidacy.

It wasn’t supposed to be this way. Potential Democratic Party contenders stepped aside for Clinton’s coronation, and we were all meant to be celebrating the prospect of the first woman president. Yet she found herself having trouble putting away an obscure senator from Vermont. Now, even though Bernie Sanders has been virtually eliminated, he still won’t go away. At a time when frontrunners are usually consolidating support, Sanders remains able to win states. And as Hillary seeks to turn her fire on the Republican nominee, Donald Trump, she can’t, because she has to devote time and money fighting Sanders in the remaining primary states, such as California (which votes on 7 June).

Clinton and establishment Democrats want to present a united and confident image to the electorate, but the party appears increasingly divided. Recent scenes in Nevada saw Sanders supporters throwing chairs, insults and death threats at party leaders. Republicans were supposed to be the hopelessly fractured party, and yet more and more of its representatives have fallen in line behind Trump. Meanwhile, Democratic Party figures fear that the Sandernistas’ Nevada disruptions will spill over to the party’s convention in Philadelphia in July. In the hope of pacifying Sanders, Clinton has given spots to his people on the convention platform committee, and looks ready to make more concessions.

Certainly, Sanders is not helping Clinton. As the odds of Bernie winning dwindle towards zero, his attacks on her become more vitriolic. Indeed, party officials worry that he is fomenting such hatred of Clinton among his die-hard, ‘Bernie or bust’ fans that they won’t come out to vote for her in the General Election, even to stop Trump.

Sanders hasn’t fundamentally changed his tune. All along his main argument has been that Wall Street and the billionaires have ‘rigged’ the economy, the media and politics, and he has always said Clinton is a prime example of that set-up, pointing (endlessly) to her speeches to Wall Street firms. His central argument has been that Clinton is corrupt. Now he is just being more explicit about it.

What is new is that Sanders’ criticisms of Hillary and Wall Street have morphed into grievances about the Democratic Party itself. After claiming endlessly that Wall Street has ‘rigged’ the economy, he now says that the Democratic Party establishment has ‘rigged’ the nomination contest against him. As it happens, his argument is thoroughly unconvincing. Many of the states Sanders has won have held caucuses rather than primary votes, which involve far fewer people and are thus arguably less democratic. Furthermore, his arguments regarding the Democrats’ ‘super-delegates’ (the extra nomination votes held by party politicians and officials that don’t depend on state outcomes) are totally confused. One minute he says the super-delegates should be eliminated; the next he says they should vote according to how their state voted (which would mean for Clinton, not him); and the next he says that all super-delegates should vote for him because polls shows he performs better against Trump (which is a call for the super-delegates to override the will of the party’s voters).

While making claims that the election has been ‘stolen’, Sanders and his supporters conveniently ignore the fact that Clinton has received about three million more votes than he has. His increasingly wild claims about ‘rigged’ elections and ‘media manipulation’ reveal how a conspiratorial mindset can go off the rails.

Indeed, the Sanders-Clinton battles increasingly look more like petty squabbles than principled political differences. In policy terms, the two were not that far apart to begin with, and they have moved closer over time. Sanders has pushed Clinton in his direction on trade and the minimum wage, while Clinton has pulled Sanders in her direction on issues of race and women (issues he was reluctant to engage with). And both are trying to out-do each other in adopting anti-growth, environmentalist stances, such as opposing fracking.

Under Obama, the Democratic Party has become an upstairs-downstairs coalition of those with high and low incomes, buttressed by public-sector employees and centered on redistributionist welfare policies and identity politics. What’s left out of the coalition is the working class, as a sizeable portion of that class has migrated to the Republicans. Both Clinton and Sanders are continuing the Democratic Party along that same path, despite their differences. Their shared environmentalism, for one, shows that they both support the agenda of the post-industrial elites on the coasts, rather than the Middle Americans who rely on ‘dirty’ stuff like energy and industrial growth for jobs.

But for all of the headaches Sanders is creating for Clinton, it’s important to recognise that he is a symptom, not the cause, of the problems facing her. It is easier for the party establishment to lay the blame on Sanders than to face up to the fact that Clinton, and the establishment more broadly, have deeper problems. The weakness and lack of appeal of Clinton and establishment politics has allowed a nobody like Sanders to gain traction and disrupt their dreams of a smooth nomination.

The fact is that Obama, Clinton and the rest of the party establishment opened the door to Sanders. They embraced the same arguments against Wall Street and the ‘one per cent’, and endorsed the tactics of Occupy and Black Lives Matter protesters. After welcoming these developments, the establishment is now dumbstruck when the anti-elite arguments are targeted at them, and protesters storm stages and shut down speakers.

This is a broader crisis of elite authority, and there are parallels with what we’re seeing on college campuses today. Academics came up with ‘rape culture’, ‘decolonisation’ and other notions that energise students. And administrators have indulged these protesters, often giving them influence over campus policies. Yet now they are shocked that students have turned on them – occupying university offices, seeking to get faculty fired, charging professors with ‘triggering’ them in class – using the same arguments. The bewildered university administrators are left crying, ‘but we’re your allies…’. Similarly, the Democratic Party establishment can’t understand why some of the younger generation are so hostile towards it, given that they share many of the same ideas.

That said, Clinton’s real weaknesses have absolutely nothing to do with Sanders and his supporters. There’s no getting around the fact that she is exceedingly wooden and dull on the campaign stump. She also seems like a holdover from the past, at a time when there is a desire to move on. The email scandal is damaging for many reasons. National security is a serious issue for the presidency. But it is also a reminder that she has been dogged by scandal and controversy for decades, and people are simply tired at the prospect of more.

Furthermore, you cannot blame Sanders for polls that show many believe Hillary is untrustworthy. Incredibly, a recent poll found that she is viewed more negatively than Trump – at 61 per cent vs 56 per cent. Many now speculate that she could lose to Trump in November. And that’s on her, not Bernie.

But the negative opinions of Clinton are not entirely down to her personal weaknesses as a candidate. She has tied herself to the Obama administration, and has become seen as a representative of the status quo. With the emergence of outsiders like Sanders and Trump, this year is turning out to be a change election, even if there is no agreement on what that change should entail. And that hurts a stay-the-course candidate like Clinton. Indeed, it can almost seem unfair that she – and not Obama himself – is taking the hit for people’s frustration with economic and social stagnation.

In the near future, we should expect to see the Democratic Party establishment express more anger towards the Sanders camp, as he and his supporters seek to spoil the coronation and disrupt the convention. But Hillary and the party elites have only themselves to blame for their woes.