The Hulk Hogan sex-tape case is an attack on free expression. 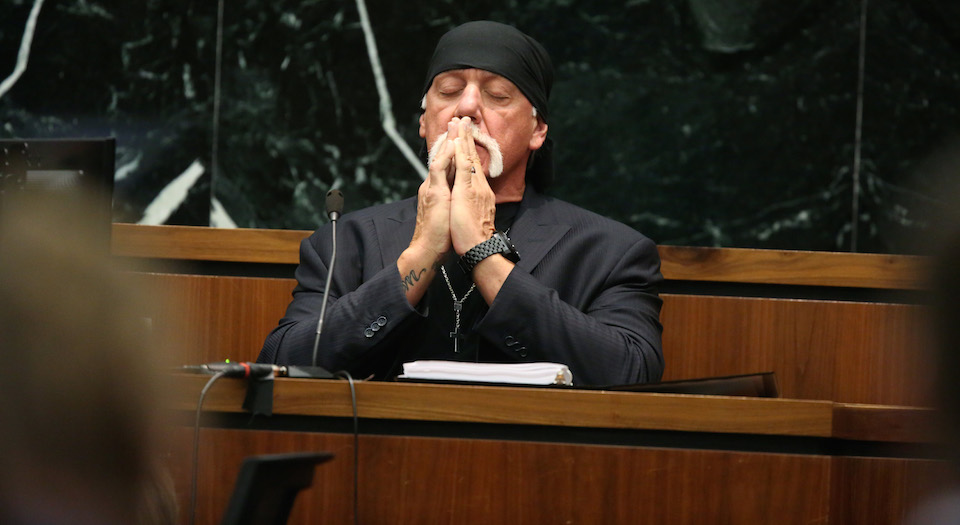 If we are serious about making a stand in the free-speech wars, we don’t get to pick and choose whose freedom we want to defend. Defending the freedom of the press cannot only mean standing up for the right of the high-minded New York Times or Guardian to publish Wikileaks revelations. Like it or not, press freedom must also mean defending the dirt-digging, gossip-mongering US website Gawker against the legal attempt to bankrupt it for publishing a sex tape starring wrestler Hunk Hogan.

The story so far: in 2012 Gawker published an excerpt from a leaked video which showed an unsuspecting Hogan having sex with the wife of a friend (who had apparently set up, filmed and leaked it, that being what friends are for).

When Hogan first tried to sue Gawker through a copyright claim, a US federal judge quite reasonably ruled that there was a justifiable public interest in publication. The sex tape had already been widely reported and publicly discussed, including by Hogan himself. There was no suggestion that Gawker was involved in making the illicit video, or had stolen it. Instead it was publishing a publicly discussed item that had been handed to it. We might recall other ‘respectable’ sections of the media publishing documents obtained through questionable methods, whether the Wikileaks security revelations (which also contained salacious details), or the mass of personal Sony emails hacked and leaked in 2014.

The wrestling legend then changed tactics and went for a different hold, suing Gawker instead for breach of privacy. In March 2016 a Florida jury found for Hogan on that basis, and awarded him a total of $140million in damages – easily enough to finish off Gawker (the verdict is subject to appeal).

Now it has been revealed that the Hulk’s privacy case was secretly bankrolled by the billionaire venture capitalist Peter Thiel, co-founder of PayPal and a Facebook investor/director. Thiel has apparently wanted to close Gawker down since 2007, when the site publicly ‘outed’ him as ‘totally gay, people’, although his sexuality was already well known. He has accused Gawker of being the media equivalent of al-Qaeda. Many of his contemporaries among the thin-skinned Silicon Valley elite seem to share Thiel’s distaste for independent websites which dare not only to criticise but to mock them.

After his elaborate revenge plot was recently revealed, Thiel declared that ‘freedom of the press does not mean freedom to publish sex tapes without consent. I don’t think anybody but Gawker would argue otherwise.’ But some of us would argue that, whatever we think of celebrity sex tapes, freedom of the press means defending scurrilous websites against public figures who want to pay to silence publications that are not to their taste.

Privacy is a messed-up issue today, with the line between private and public becoming increasingly blurred, if not erased. It is an unfortunate fact that we live in a time when people’s private lives – from their sexual affairs through their illnesses to their text messages – can be a source of widespread interest and media coverage. A time when the authorities demand the right to pry into our personal lives, while celebrities can turn their private affairs (and sometimes their sex tapes) into PR stunts. These are big, complex issues, and it would take something like a cultural revolution to sort out our society’s attitude to the private and public spheres.

Laws, injunctions and court cases like this one, which elevate a narrow definition of privacy for those who can afford it, will do nothing to resolve these social problems. They will, however, do a lot to diminish the public rights to freedom of speech and of the press on which our civilisation depends. In the end, freedom of expression remains our most precious liberty – and press freedom must include the freedom to publish salacious stories and be damned.

The consequences of the Gawker case could be particularly damaging. For more than 200 years, the First Amendment to the American Constitution has made the US a bastion of free speech in the West. For more than 50 years, the US Supreme Court has interpreted the First Amendment to make it almost impossible for public figures to punish or silence their critics by suing for defamation. Now, in the words of the New Yorker, the attack on Gawker by Thiel, using Hogan as a front, threatens to change the rules and ‘could open a war against the press’.

The 1964 case of New York Times v Sullivan was the landmark hearing. The Supreme Court found for the newspaper against LB Sullivan, safety commissioner in Montgomery, who claimed he had been libelled in an advert for the black civil-rights movement. The justices found, however, that it should not be an offence to criticise or defame public officials, even if the criticism contained honest mistakes, unless the publication was motivated by malice – that is, they knew it was untrue. As the Supreme Court judgement put it well, ‘[D]ebate on public issues should be uninhibited, robust and wide open’, which ‘may well include vehement, caustic and sometimes unpleasantly sharp attacks on government and public officials’.

In the decades that followed, the courts interpreted this ruling in a wide fashion, making it very difficult for any public figure in any walk of life to win a lawsuit against a news organisation. If ultimately successful, the Gawker lawsuit could open up a new front, allowing celebrities and officials to use the cry of ‘privacy!’ to attack the freedom to publish the truth. It has been pointed out that Thiel is a big Donald Trump supporter, and that Trump has vowed to ‘open up our libel laws so when they write purposefully negative and horrible and false articles, we can sue them and win lots of money’. But even if The Donald never gains the power to change the constitution, there will be plenty of other powerful people looking for a chance to use the stick of privacy law to beat down publications they consider ‘negative and horrible’. And they will be doing so against a media that is now seen to have less public support and fewer resources with which to fight back.

Thiel has been described as a ’comic-book villain’. Yet far from being a caricature, his attack on Gawker makes him very much a man of his time. The tycoon has accused Gawker of hateful bullying, and claimed his only interest in funding the case is in defending the privacy rights of those who cannot do so themselves (he stopped short of calling Hulk, the 6’ 7” millionaire, one of the ‘little people’). Thiel even claims that bankrolling Hogan’s lawsuit to cripple or close Gawker is ‘one of my greater philanthropic things I’ve done’. This is pretty typical of an age in which few will admit they are really attacking freedom of speech or of the press, but will try to disguise it as a defence of the rights of others, whether the right to privacy or the right to feel comfortable in a safe space.

The Silicon Valley elite’s use of Hulk Hogan as a (sizeable) human shield behind which to attack press freedom for vulgar websites brings to mind the tactics of the celebrity-fronted Hacked Off campaign in the UK. Hacked Off has enjoyed using the victims of phone-hacking as human shields behind which to pursue its broader crusade to ethically cleanse the tabloids it looks down upon as the ‘gutter press’. And just as the UK tabloid-bashers always proclaim their support for the ‘public-interest journalism’ of the ‘respectable’ media at home and especially around the world, some Gawker-hunter proudly donate to the Committee for the Protection of Journalists, a charity which campaigns for journalists persecuted elsewhere in the world.

Yet it is relatively easy to give your rhetorical support – and cash – to free-speech heroes in foreign places. The acid test, however, is always at home: in the words of a famous US Supreme Court judge, to support ‘not free thought for those who agree with us but freedom for the thought that we hate’. This is a test that Thiel and his ilk have comprehensively failed. The Gawker empire of British former FT journalist Nick Denton has given the lords of Silicon Valley plenty to hate – and not only by spreading salacious gossip. For example, it was one of Denton’s outlets, Gizmodo, which recently revealed how the Facebook news teams filtered out stories which went against the conformist grain laid down by boss Mark Zuckerberg. The fact that the elite’s response to these annoyances has been to use the Hogan case to try to close Gawker down confirms their fundamental belief in ‘free thought for those that agree with us’.

Yes, it might be less than ideal to have out the argument for press freedom over unappetising revelations about Hulk Hogan’s sex life. But so what? In real life, freedom is often a dirty and even bloody business and you don’t get to choose where to fight for it. Indeed, some of the biggest historic battles for free speech have been fought down in the muddy lower fields of gossip, scandal and filth.

In eighteenth-century England, John Wilkes, my favourite heretical hero of the struggle for press freedom, was convicted of seditious libel for daring to publish criticism of the king. At the same time, Wilkes was found guilty of obscene libel by the House of Lords, for publishing pornographic poetry. Yet Wilkes and his scurrilous publications struck major blows for the advance of freedom of the press and democracy.

More recently, the pornographer Larry Flynt, publisher of Hustler magazine, became an unlikely figurehead for the fight to defend free speech against twentieth-century prigs and prodnoses. As his character famously remarks in the movie The People vs Larry Flynt, after one of his many court appearances, ‘If the First Amendment will protect a scumbag like me, it will protect all of you.’

On the other hand, if we allow freedom of expression to be undermined by the rich and powerful in the name of privacy laws, most of us will end up with the worst of all worlds – no more privacy, but even less public freedom to speak, write, read and gawk at what we choose, whether others approve or not.