Project fear: the exhaustion of the elites

The EU referendum debate has taken the politics of fear to a new low. 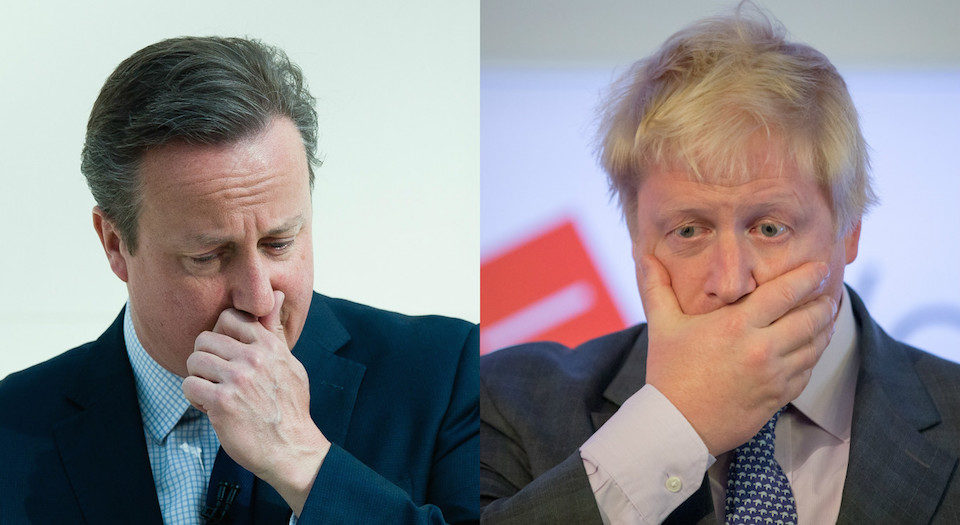 I have lost count of the number of alarmist warnings that have been raised on both sides in the run-up to the EU referendum. The so-called debate has amounted to little more than competitive scaremongering. And now, as we approach the final stretch, the fear card is now being played more irresponsibly than ever before.

Even so, Boris Johnson’s comparison of the European Union with Hitler’s Nazi Germany took the politics of fear to an unprecedented low. Such a historically illiterate and inflammatory remark reveals Johnson’s confusion about what is actually wrong with the EU. But although Johnson’s comparison is in poor taste, it is not qualitatively different to the other fearmongering claims made over the past few months. There is little difference, for example, between Johnson’s infantile reference to Hitler and his opponent David Cameron’s warning that if the UK votes for Brexit, ISIS leader Abu Bakr al-Baghdadi will be absolutely delighted.

It is difficult to keep up with the numerous tales of fear manufactured on both sides of the referendum debate. The Stay campaign has warned that Britain’s security would be seriously undermined if the UK leaves the EU. Cameron has also argued that, post-Brexit, Europe would slide into war. Brexit supporters have adopted the same tactic. They claim, for example, that the UK’s security will be compromised if it stays in the EU. The fearmongering is interminable. Both sides have claimed that either leaving or staying in would have catastrophic consequences for the economy, undermine Britain’s ability to control its borders, and weaken the nation’s farming sector.

Both sides now also accuse each other of using the politics of fear, even labelling each other as proponents of ‘project fear’. The frequent use of this phrase, project fear, offers a paradigmatic example of bad faith. Both sides practice what they condemn in the other.

Furthermore, the use of project fear as a term of abuse is no substitute for logical argument and an alternative perspective. Merely decrying the negativity of the debate is nothing but a sanctimonious pose unless a positive alternative is offered. Take Labour’s shadow chancellor, John McDonnell. He said that he wants to ‘rescue the debate from the negativity and “project fear” coming from all sides of the Tory Party’. Which would be admirable if the Labour Party’s own contribution to the debate so far hadn’t been so thin and replete in fearful claims.

The referendum should have provided an opportunity for a grown-up debate about competing visions of the kind of Britain we’d like to see in the future. The pro-Brexit campaign could have made a serious contribution to public life by focusing positively on the importance of national sovereignty. Its campaigners should have devoted serious intellectual energy to explaining how genuine representative democracy presupposes popular sovereignty, and that popular sovereignty cannot have much meaning in the context of a centralised supra-national institution like the EU. In turn, the Stay campaign could have explained its vision for Europe, and how it would benefit Britain’s future. Unfortunately, neither side took the opportunity to look forward and offer a future-oriented approach to the debate.

It is tempting to blame the current practitioners of the politics of fear for the political malaise afflicting Britain. But the main protagonists merely personify trends that have been in existence for some time. As I argued in The Politics of Fear: Beyond Left and Right, British public life has gone through a prolonged phase of political exhaustion. One symptom of this exhaustion is the disorientation of mainstream parliamentary parties and political elites. It has been clear for some time that they lack a mission or a focus. In this respect, Britain’s political elites suffer from the same problems as their colleagues in other parts of the Western world.

As Zygmunt Bauman, one of Britain’s leading social theorists, noted: ‘Unlike their ancestors of the nation-building era, global elites have no mission to perform; they do not feel the need or intend to proselytise, to carry the torch of wisdom, to enlighten, instruct and convert.’ With so little at stake, disagreements about policy issues frequently have the character of a squabble rather than a debate. Public figures attempt to compensate for their petty posturing by adopting high-octane rhetoric. So, paradoxically, one of the consequences of the decline of purpose and substance is the escalation of the level of hatred and vitriol that different factions express towards one another.

Political parties find it difficult to mount a political project today. Back in 1997, Oxford political philosopher Isaiah Berlin remarked that ‘for the first time since 1789 the European left does not have a project’. He could have added that neither did the European right. The construction of the term project fear represents a mawkish recognition of the absence of the real thing.

Former US president, Franklin D Roosevelt, who was far from flawless himself, almost nailed it in his inaugural address in 1933, when he stated that the ‘only thing we have to fear is fear itself’. Roosevelt was trying to assure the public that it is both possible and necessary to minimise the impact of fear. He could have gone on to say that there is little point in fearing fear, for that, too, could lead to the playing of the fear card.

But his was a positive vision of a future where fear could be put in its place by a society that believed in itself. Today, politicians are far more likely to advise the public to fear everything – including fear itself.