Hillsborough: a few truths they still want to hide

The cover-ups around the deaths of 96 Liverpool fans are not over yet. 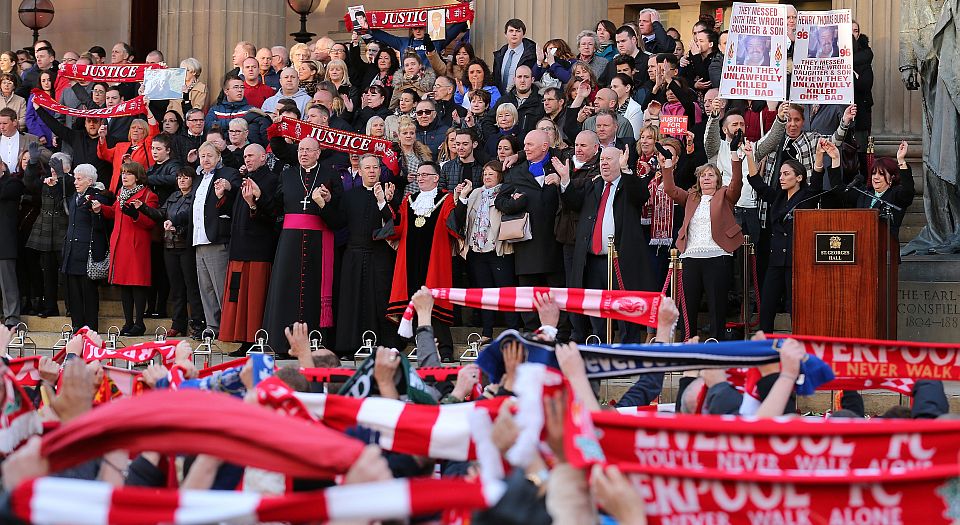 At last, everybody has agreed. Since last week, The Truth about Hillsborough is out and undeniable. At the end of the longest jury case in British legal history, 27 years after 96 Liverpool fans died in a crush at Sheffield Wednesday’s Hillsborough Stadium, an inquest jury unanimously cleared the supporters of any blame for the tragedy, and found by a majority verdict that the 96 had been unlawfully killed due to what reports described as ‘a catalogue of failings by the police and ambulance services’.

The political and media class raced to show their support for the Hillsborough families, whose long campaign to clear their loved ones’ names and expose the official cover-up had finally won what headlines declared as ‘Justice for the 96’. The great and good turned in apparently unanimous horror to point fingers at the senior police officers held most responsible for the deaths and the cover-up – former chief superintendent David Duckenfield, who was in charge on the day in April 1989, and South Yorkshire chief constable David Crompton, who was suspended after the inquest verdict. Get those two top cops and a few more in the dock, the consensus seems to be, and it will finally be case closed.

Well, up to a point, Lord Copper. Here are just a few of the other truths they want us to forget about.

1) There is still a cover-up

There has been much condemnation of attempts to disguise what really happened at Hillsborough and to divert responsibility on to the fans. These attempted cover-ups range from the Sun’s notorious front page declaring ‘The Truth’, which, days after the disaster, falsely alleged drunken Liverpool fans had caused the crush, robbed the dead and abused rescuers (for which the paper made a front-page apology in 2012), to South Yorkshire Police’s barristers’ re-raising of allegations about drunk and aggressive fans during the inquest evidence.

Yet, as we argued on spiked last year, when finger-pointing at former CSI Duckenfield began in earnest, ‘Blaming one top cop is a cover-up, too’. And so is blaming two top cops. The emphasis on the undoubted failings, errors and misjudgements by individual police commanders on the day entirely avoids a key issue: the wider political and policing context which enabled something like Hillsborough to happen.

Why were thousands of Liverpool supporters caged in a steel pen in the first place? As some fans tried to climb out to safety, why was the first reaction of police officers to throw them back into the cages? Why did the police react to the unfolding horror at the Leppings Lane end by forming a battle line across the middle of the pitch, as if dying and injured Liverpool fans might somehow rise up and charge the opposition supporters of Nottingham Forest? And when the scale of the disaster became clear, and the authorities finally moved to deal with it, why was there a fleet of police ‘hoolivans’ yet only one ambulance in attendance at the ground for that 1989 FA Cup semi-final?

None of these had much to do with incompetence or misjudgement. They were the results of a deliberate state policy, pursued from the Conservative government downwards and backed by the media, of treating football fans as a cross between animals and prisoners of war.

Having declared war on the organised working class in the old trade unions, Margaret Thatcher’s government was pursuing a paramilitary campaign against the unorganised working class on the crumbling terraces. Tory proposals to impose a system of compulsory ID cards on football fans – and solely for football fans – were only reluctantly shelved after Hillsborough. The law-and-order drive at football created a situation where many of us who had been trapped in those steel cages before sensed that any big match was a Hillsborough waiting to happen.

2) The heroic Hillsborough families have been used as ‘human shields’

The families of Hillsborough victims and survivors of the disaster are now hailed as national heroes, and deserve nothing but praise for their tenacious campaign. Yet we should recognise that they have also been used as ‘human shields’ by those authorities seeking to sanitise and control football – including many who sought to join them in a chorus of ‘You’ll Never Walk Alone’ last week.

A glance back at the initial government statement on Hillsborough in 1989 shows how the Tories saw it as an opportunity to pursue their agenda of ‘cleaning up’ the unruly proletarian pastime of football. Home secretary Douglas Hurd announced to the House of Commons the setting up of an inquiry under Lord Justice Taylor. This would consider issues of crowd safety at football, but Hurd also made clear that ‘an important part of that must be protection against hooliganism and violence’. In this context, the Tory cabinet minister repeated the government’s pre-Hillsborough support not only for a national identity-card scheme, but also for all-seater stadiums.

When Lord Justice Taylor eventually published his report, it duly demanded all-seater stadiums along with other restrictions on fans at football matches. Taylor justified these measures in order to improve the comfort and safety of supporters – but also to improve their behaviour. As his report into the ‘poor facilities’ at English football’s decrepit stadiums concluded: ‘This inhospitable scene tends to breed bad manners and poor behaviour. The atmosphere does not encourage pride in the ground or consideration for others.’

Over the intervening years, we have witnessed a sustained crusade to sanitise football and make it fit for new, middle-class fans. As a result, we are left with more comfortable, all-seater stadiums that are also often atmosphere-free. And anytime anybody questions these trends – for example, by proposing the introduction of ‘safe standing’ areas and beer, as enjoyed by German fans – the authorities hide behind the Hillsborough families to denounce their ‘irresponsible’ critics and declare ‘Never again’.

It seems that everybody now accepts the truth about Hillsborough, as insisted upon by the campaigners for years and endorsed by the inquest jury last week. Which ought to raise the question: why then did everybody apparently go along with the cover-up of the truth for so long?

Of course, they didn’t. Many people saw through the lies about Hillsborough from the start. I was then the editor of a weekly newspaper called the next step, published by the Revolutionary Communist Party (both long deceased). In response to the Sun’s notorious front page about drunken, abusive fans, we published a front page under the same headline – ‘The Truth’ – which provided our own bullet-point version of events: ‘* Thatcher led the law-and-order drive which caged fans * Police treated dying fans as a public-order problem * Press liars abused the dead to cover up the truth.’ We did not claim any great powers of insight to reach these quick conclusions. It was a matter of being on the side of working-class football fans against the government and the police.

On the other side of that divide, some people saw The Truth differently, because it suited their own political perspective. The story published in the Sun – and reported elsewhere in the media, though under less provocative headlines – was not dreamt up out of thin air, but based on claims made by senior police officers and a local Conservative MP. The political establishment, state agents and their media allies sought to maintain a united front in putting their case against the crowd.

What has changed in the past 27 years is not the facts of what happened at Hillsborough, but the ability of the old political establishment to maintain its version of the truth. The collapse of coherence and solidarity within those circles became apparent during the inquest, as for example when barristers representing the Police Federation pressed former top cop Duckenfield into effectively admitting he was responsible for the deaths on the day. Now everybody from Tory ministers to police commissioners wants to blame others and talk about Hillsborough as if they are members of the Justice campaign. That should not lead the rest of us to forget that The Truth is often a politically expedient commodity.

4) The fan-bashing spirit of Hillsborough lives

The Hillsborough campaigners have been widely praised for keeping alive the spirit of the victims and the fans. Yet we should recognise that the other side of the spirit of Hillsborough – the contempt for working-class football fans – lives on, too.

Back then, supporters were often branded as hooligans, animals and scum; as one mid-Eighties newspaper famously described it, football was ‘a slum sport played in slum stadiums increasingly watched by slum people, who deter decent folk from turning up’. Nobody needs to pretend that there was no football hooliganism in the Eighties; we need only recall the often-forgotten disaster at Heysel, in which 32 Italians (and 7 others) died when a wall collapsed after they were charged by Liverpool fans before the 1985 European Cup final against Juventus. But that was no justification for the paramilitary policing of football crowds that led to Hillsborough.

These days, attempts to police football fans are more insidious. The spectre of hooliganism has largely been laid to rest by comprehensive policing systems and high ticket prices that mean the average Premier League spectator is now a relatively sedate middle-aged bloke. The authorities are still preoccupied with controlling the crowds, but now the emphasis is on controlling not just what they do, but what fans can say, sing and even think in the no-smoking/swearing/standing stadiums and beyond. The high-minded media is more likely to brand old-fashioned football fans ‘knuckle-dragging’ racists, misogynists and homophobes than hooligans. In ‘progressive’ Scotland, the Offensive Behaviour at Football and Threatening Communications Act has even resulted in fans being jailed for singing ‘naughty’ songs.

Scratch the surface and this reveals much the same spirit of fear and loathing for the mass of football fans that was behind both the Hillsborough disaster and the attempts to blame Liverpool supporters for causing their own tragedy.

Now some commentators even want to contrast the well-behaved Liverpool supporters with others – thus maintaining a dual attitude of both solidarity with the Hillsborough victims and disdain for vulgar football fandom. Days after the inquest verdicts, a headline in the Guardian (no surprises there) argued that ‘The authorities failed the Liverpool fans at Hillsborough. But so did the real hooligans’, by creating ‘the excuse’ for cages and harsh policing at matches. So, Liverpool supporters may have been blameless, but it still appears that for some the ‘real hooligans’ among football fans were partly to blame.

The inquest jury’s verdict that the fans bore no responsibility for the disaster was a welcome rebuttal of all the old false allegations blaming drunken fans. Yet there is no need to pretend that the blameless Liverpool fans on that day must all have been sober saints. Neither are Leicester fans this week, nor any other set of football supporters. And nor should anybody expect them to behave like a choir on their way to a sanctified service, rather than a raucous crowd out to enjoy a big match.

It will be another tragedy if the legacy of Hillsborough is twisted to help further smother the spirit of football.