Assange: the absurdity of international law

Yes, this ruling was mad. But UK officials only have themselves to blame. 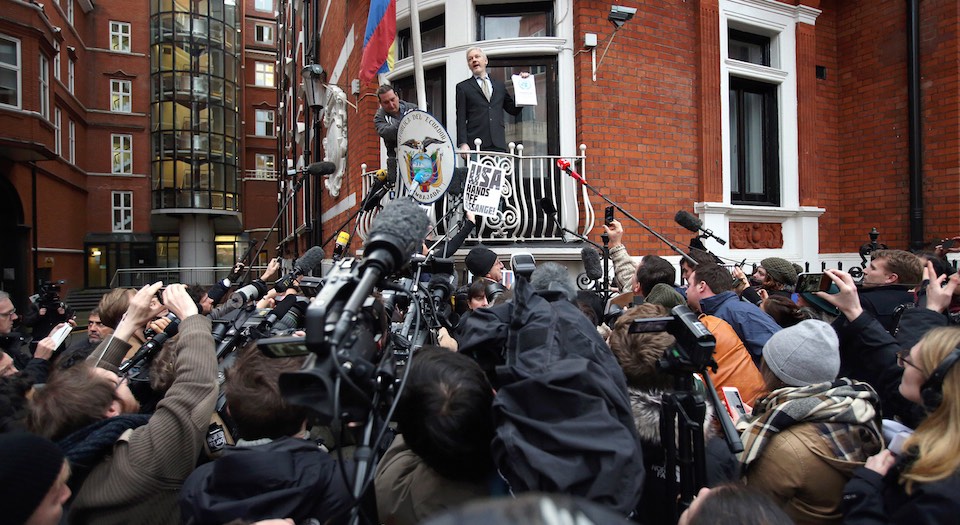 Last week, Wikileaks founder Julian Assange was celebrating his ‘vindication’ after the United Nations Working Group on Arbitrary Detention claimed that his ongoing ‘incarceration’ at the Ecuadorian embassy in London was contrary to international law. In a bizarre press conference, a senior official in the Office of the United Nations High Commissioner for Human Rights opened with the cryptic statement, ‘The panel has decided that the detention [of Assange] may be legal but it is arbitrary’, before directing bewildered reporters to read the full opinion. The opinion states that Assange’s detention violated Article 9 of the International Covenant on Civil and Political Rights. One of the experts on the panel, a Ukrainian prosecutor called Vladimir Tochilovsky, dissented from the majority opinion, arguing that Assange’s case did not amount to arbitrary detention.

Whether the ruling will do anything to draw Assange’s extended stay in the embassy to a close is unclear. Assange sought asylum in the embassy in 2012 after Swedish prosecutors issued a warrant for his arrest in connection with an allegation of rape. In the course of Assange’s submissions to the working group, his lawyers claimed – and the working group agreed – that Sweden had not been sufficiently rigorous in investigating the allegations. They also argued that his travel to Sweden would put him in danger of extradition to the United States where he would be tried for treason, thereby putting him at risk of inhuman and degrading treatment. His case has already given rise to lengthy extradition proceedings, in which Assange contested whether Sweden had the power to order his extradition.

In other words, the opinion of the working group is just the latest episode in Assange’s ongoing evasion of due process. The working group’s opinion was dismissed by the UK government, with foreign secretary Philip Hammond calling it ‘ridiculous’. It also had most of the world Googling to find out exactly what this working group amounted to. As it turns out, it is effectively a group of five international legal experts, four of whom are academics, which was founded by the United Nations Human Rights Council. The opinion has no legal force whatsoever in the UK, and will be roundly ignored by those seeking Assange’s arrest.

Legal commentators rushed to dismiss the opinion as ‘legally illiterate’, bemoaning its apparent ignorance of UK criminal law. The opinion suggests that Assange’s initial detention at Wandsworth Prison was ‘arbitrary’ even though it was perfectly lawful in this country. If the reasoning of the opinion was applied consistently, it could be used to argue that anyone held in prison prior to trial was there ‘arbitrarily’. Many pointed out how laughable it was to suggest that Assange was ‘detained’ at all, given that he had entered the embassy of his own volition. Twitter responded with a brilliant hashtag, #ArbitrarilyDetained, under which users gave examples of their own ‘detention’, including being stuck late at work or in the queue at Tesco.

But the criticism of the working group following the Assange opinion is tinged with hypocrisy. Of course the opinion is a nonsense, and it is mad that the working group can declare that a man fleeing a serious allegation and hiding away in a foreign embassy is being ‘denied his rights’. But the ruling does not merely highlight the absurdity of this one, comparatively insignificant working group; it highlights the absurdity of the entire system of international law. The notion of ‘arbitrary detention’, bestowed from on high by unelected academics at the UN, is no more mad, and certainly no more destabilising, than many of the other doctrines of international law, which routinely impose ridiculous standards on domestic legal systems, despite bearing no relation to the values of the country they affect.

Look at the recent history of another international legal doctrine, ‘war crimes’. Is the notion of arbitrary detention any more divorced from reality than the idea that complex civil conflicts can be neatly divided into the good guys and bad guys, as war-crime prosecutions so often purport to do? Is arbitrary detention any more ‘legally illiterate’ than those international lawyers who, while intervening clumsily in the deeply complex violence in post-election Kenya in 2007, have done nothing about the internment and execution of hundreds of members of the Muslim Brotherhood by Egypt’s president Abdel Fattah al-Sisi? Is arbitrary detention any more bizarre than international criminal prosecutions for ‘genocide’, which have expanded the term to the point of meaninglessness? Is the Working Group on Arbitrary Detention, with its staff of five aloof legal academics, any more of a crackpot tribunal than the International Criminal Court (ICC), an institution based in Europe which rushes to indict elected leaders of African countries while ignoring the actions of Turkey in its ongoing war of aggression against the Kurds? Are we really going to scoff at one working group while ignoring the rampant hypocrisy and selective application of international law as a whole?

Perhaps the Assange opinion is just a taste of our own medicine. While we complain about the interference of these working groups in our legal systems, we should remember that countries routinely apply to the ICC to try cases for themselves, only to be told that their judicial systems are inadequate. When the ICC indicted Kenyan political leaders in 2010, including then deputy prime minister Uhuru Kenyatta, for the role they played in the post-election violence, the Kenyan authorities fought to have the trial on their own terms. The ICC refused. The same occurred in Libya in 2011, after the ICC indicted members of the Gaddafi family.

It goes without saying that Assange is a creep who has manipulated international law to his own ends. But we should not be shocked when a group of faraway lawyers profess the power to interfere in our systems of justice: this is what international law was designed to do. We can at least be glad that UK leaders are sufficiently powerful within the UN to reject them. UN law is designed to impose the rule of lawyers over and above the democratic legal systems of the countries it affects. If the UK now finds itself in the position of having to follow an opinion that it finds ridiculous, it has only itself to blame.