End this phoney war over Europe

If nobody likes Cameron’s EU deal, why are they all backing it? 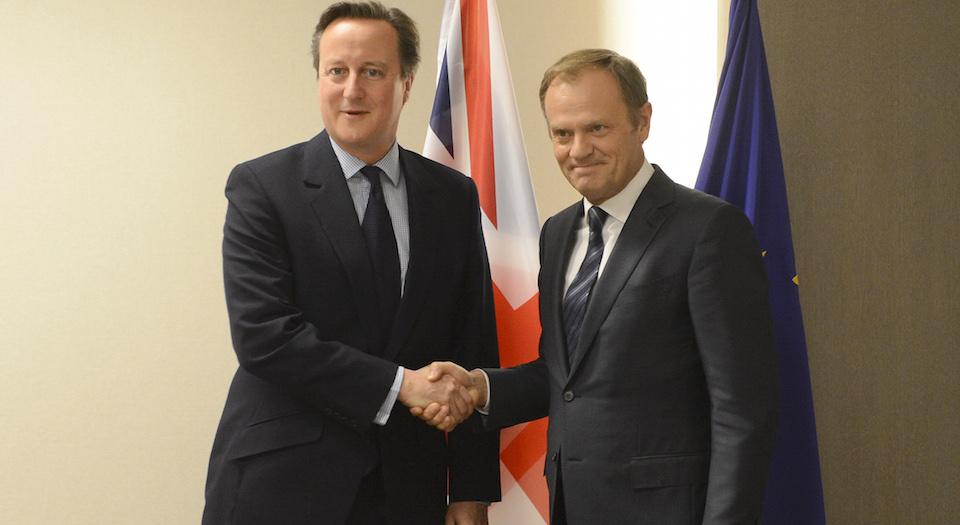 Nobody in the UK political and media class appears keen on David Cameron’s draft deal on European Union reform. So why are they all going along with it?

When Tory prime minister Cameron returned from those ‘historic’ talks with European Council president Donald Tusk, proudly waving his piece of paper like an unconvincing Neville Chamberlain tribute act, there were no cheering crowds outside Downing Street, or inside parliament. Everybody, it seemed, agreed that the proposals to reform the UK’s relationship with the EU were weak-kneed rubbish, a distant echo of Cameron’s previous big promises about changing the Euro treaty to preserve British sovereignty.

There were widespread complaints that the Tories’ much-vaunted plan to limit welfare payments to EU migrants (always a political sideshow anyway, since most of them come to the UK to get jobs, not benefits) has been neutered. As for the supposed restoration of national sovereignty, the proposal that a 55 per cent vote of all EU parliaments could in future block a decision by European ministers seems so unlikely ever to happen that it was easily dismissed as more of a white flag from Cameron than a ‘red card’ to the Euro-bureaucracy.

Yet within hours, these pathetic proposals had apparently transmogrified into a solid enough basis for all leading sections of the UK political class to unite behind the ‘Remain’ campaign in the forthcoming referendum. On the right, frontbench Conservative Eurosceptics such as home secretary Theresa May backed Cameron’s push to retain UK membership of the EU on the basis of his proposed deal with Tusk. Yesterday, the Guardian was even reporting on the prospect of Boris Johnson, EU-bashing London mayor and Cameron’s leadership rival, ‘joining the campaign to keep Britain in a reformed EU’.

On the left, meanwhile, longstanding Eurosceptic Labour leader Jeremy Corbyn attacked the ‘Tory Party drama’ of Cameron’s ‘renegotiation spectacle choreographed for television cameras over the whole continent’. He agreed with Tory backbenchers that ‘the proposals from the European Council are simply tinkering around the edges’. Yet Corbyn concluded that, under his left-wing leadership, the Labour Party would campaign for the UK to remain in the EU – on the basis, whether he likes it or not, of these ‘tinkering’ proposals.

The great battle between the leaders of Britain and the EU, and within the UK political elite, has turned out to be more like a phoney war. Despite all of their harrumphing, the pillars of the UK political class are desperate to remain part of the elite Euro club. They are far more dependent on EU membership than Polish migrants might be on UK benefits. That is why, despite the economic and migrant crises in Europe, they cannot face the prospect of a vote to leave.

It has been widely noted that, lacking any positive case for the EU today, the UK campaign for a vote to remain will probably focus on ‘the fear factor’ – playing on public fears of the unknown outside the EU and the prospect of British isolation in an unstable world. Yet this is not merely a campaign trick by our political elites. They are genuinely afraid – not just of life outside the EU comfort zone but also, more importantly, of having to cope with their own people in a proper democratic debate.

It is important to remember that the creation of the anti-democratic EU was not a hostile takeover from Brussels or a foreign invasion by Germany. The ruling elites of the UK and other European nations willingly sacrificed their democracy to join the Euro elite – the British parliament accepted the primacy of European law as far back as the early 1970s – and voluntarily subsumed their national sovereignty within the ever-expanding bureaucracy of Europe’s councils, committees and courts.

The EU became the get-out clause for politicians of both left and right who felt far more comfortable dealing with sophisticated Euro judges and commissioners than having to face the unruly masses at home. The campaigning ‘human rights’ activists of the British left were among the early enthusiasts for this outsourcing of democracy, since they found it easier to persuade the suits and robes of the EU machine than to win an argument with UK voters. But the Tories were not far behind. Back when he was a hardline Thatcherite defence secretary, rather than a soft BBC TV presenter, a leaked memo revealed that Michael Portillo was happy to see the European court forcibly overturn the ban on gays in the UK military, while the Tories maintained their public pretence of support for the ban.

On the other side of the phoney war, the EU elites remain keen to retain UK membership of their power bloc. A ‘Brexit’ would not only weaken Europe’s global position, but also set a dangerous precedent. Hence EC president Tusk and Co have been willing to make some paper concessions to Cameron, for example by suggesting that member states do not have be bound by the EU’s commitment to ‘ever-closer union’.

As ever in politics, however, we should judge people and powers by what they do, not what they say about themselves. The true anti-democratic dynamic at the heart of the EU can be better seen in the recent attempts by the Eurocrats to bring to heel the elected left-wing government in Greece, and the elected right-wing governments in Hungary and Poland.

Regardless of the will of the voters, the EU elite demands that member states act as subjects, and obey its rules. Its response to every crisis, from the Euro currency debacle to the migrant catastrophe, is to propose more centralised control and integrated power structures, further removed from the people. This is ultimately the system that our political elites sign up for when they demand we vote to remain in the EU.

The debate about EU membership in the UK has so far been strangely constrained by the culture of conformism and You Can’t Say That. What we need now is a wider, no-holds-barred debate about what sort of European society we want to live in, which involves asking all the questions that are off the table today; such as why being part of Europe – which we certainly are – should have to mean being bound to the EU.

Most importantly, we need a debate that goes beyond the economic obsession of both sides with pounds, euros, pence and cents, and asks what price we are expected to pay in terms of democracy. Let the phoney war end, and the real political battle begin.