Why are angry ranchers being called terrorists?

The indiscriminate use of the T-word is trivialising genuine terrorist acts. 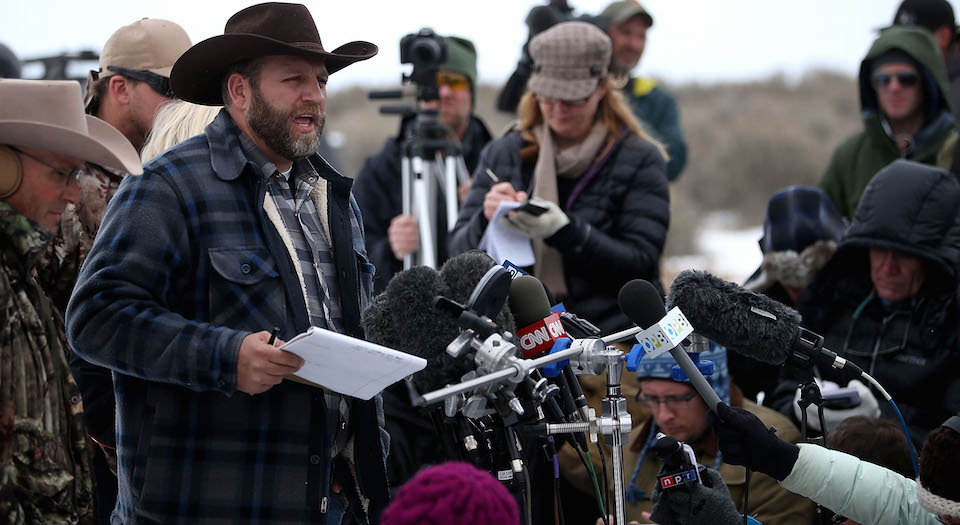 It wasn’t long before pundits played the terrorist card in relation to the standoff between a group of ranchers and the US federal government at Oregon’s Malheur National Wildlife Refuge. In the Guardian, Wajahat Ali objected to the description of the ranchers as ‘militiamen’ rather than ‘terrorists’. ‘If the Oregon militiamen were Muslim or black’, Ali wrote, ‘they’d probably be dead by now’. A Washington Post reporter, Janell Ross, asked simply: ‘Why aren’t we calling the Oregon occupiers “terrorists”?’

What’s interesting about commentators’ attempts to represent a local dispute over land as morally equivalent to a jihadist terrorist attack is the cavalier, indiscriminate way in which they apply the label ‘terrorist’. After all, as Janell at least concedes, the Oregon ranchers haven’t actually perpetrated an act of terror. There have been no reports of violence, injury or of anyone being held against their will. So why are commentators trying to characterise the standoff as a terrorist incident, and the ranchers as terrorists?

Until recently, ‘terrorist’ tended to be an integral part of the politics of fear practiced by authoritarian governments and right-wing demagogues. In the 20th century, it was widely recognised that terrorism was a morally loaded concept, used by a political regime to demonise its political opponents. It was a way of avoiding engaging with the deeper social and political questions surrounding a conflict. But, in recent years, all sections of society have started to condemn their opponents as terrorists. As a result, the underlying reasons for playing the terrorism card are now rarely questioned. Instead, competitive claims-making about who deserves the terrorist label is fast becoming a normal feature of public life.

No doubt those criticising the portrayal of the Oregon ranchers as militiamen rather than terrorists oppose government attempts to racially profile likely terrorists. Yet they are so caught up in the drama of competitive claims-making that they have embraced racial profiling in reverse. Hence they have focused on the fact that the ranchers are white and are likely to have rural, conservative values, all of which is seemingly enough to earn them the label of terrorist. This point was not lost on Jamelle Bouie, Slate’s chief political correspondent, who warned: ‘We are in danger of drawing the wrong lessons from the fact that these armed militiamen are white.’

The coupling of ‘white’ violence with terrorism has been apparent in relation to other incidents. Take the killing of three people at the Colorado Springs Planned Parenthood clinic last November. As one commentator was quick to assert, ‘Colorado Springs Planned Parenthood clinic was a victim of domestic terrorism (let’s call it by what it is)’. Another commentator tweeted: ‘If a guy has a Muslim name, many will quickly scream terrorism – if he’s a white Christian, many will say “lone wolf”.’

The almost child-like enthusiasm with which the terrorist label is applied is symptomatic of a culture in which political rhetoric has become detached from ideology and a wider concern for public life. Debate and argument now often gives way to moralising and conspiracy theory. The contemporary purpose of denouncing individuals and groups as terrorists is to enhance the victim status of those allegedly suffering at the hands of said ‘terrorists’. For example, one feminist website declares: ‘Violence against women is also terrorism.’ Another insists that ‘sexual violence against women in war should be classified as a terrorist act’. One website even sells stickers that read: ‘Rape is everyday terrorism against women.’ Men who believe that they are the victims of female violence also present themselves as victims of terrorism. According to the Men’s Experiences With Partner Aggression Project, ‘intimate terrorism by women towards men’ is a major problem.

The Culture War over the T-word

Throughout history, terrorism has been a contested concept. One important reason why, even at the best of times, the discussion of terrorism is so fraught with difficulty is that it continually involves making value judgements. Terrorism is not simply a description. It represents a judgement, a moral condemnation of an act which also serves as a political statement about an enemy. This is why, sometimes, when the relationship with the enemy improves, the terrorist label is withdrawn and the ‘ruthless terrorist leader’ is recycled as a responsible statesman. Jomo Kenyatta, Robert Mugabe and Nelson Mandela are some of the well-known national leaders who were once castigated as fanatical terrorists.

But the term terrorism doesn’t just morally condemn; it also promotes anxiety and fear. In the West, perhaps only the paedophile can compete with the terrorist as a symbol of evil. The label terrorist serves as a health warning – it suggests that those to whom it is attached are morally inferior individuals.

Sociologists argue that once a threat or a problem is widely feared, there is a tendency to frame new issues in terms of that threat or problem. That is why a bewildering array of unconnected issues can be recast as a set of terrorism-related problems. In such circumstances, just about any disquieting phenomenon can be portrayed as ‘just like terrorism’. So when a report concludes that the spread of HIV is ‘as big a threat as terrorism’, it draws on the fears and anxieties of the post-9/11 era (1). In the same way, fear entrepreneurs can present specific objectives – for example, poverty reduction – as indispensable for curbing the threat of international terrorism.

By turning the concept of terrorism into a casual term of condemnation, these fear entrepreneurs empty it of any substantive meaning. As a result, the significance of politically calculated destruction randomly inflicted on a civilian population is trivialised.

As I have argued elsewhere, there has never been, nor will there ever be, an agreement on what we mean by terrorism (2). There are dozens of competing definitions and they tend to founder on the uncertain distinction between acts of terrorism and other forms of violence. The confusion surrounding the definition of terrorism is due to the fact that, as stated above, it is not just an objective analytical concept; it is also a moral statement about the behaviour of the terrorist. And because of the varying moral and political ends to which the term is put, it is rarely used consistently and objectively.

Today, these problems of definition are complicated by the fact that Western societies are experiencing a profound conflict over cultural values. Questions about who is a terrorist and what constitutes an act of terror have slipped into domestic controversies over cultural values. That is why, almost without thinking, leading national newspapers can describe marginalised Oregon ranchers as the moral equivalent of the London bombers.

So how should we use the T-word?

Given the value-laden and subjective character of ‘terrorism’, it is tempting to avoid using it altogether. After all, it is a term that often mystifies reality rather than clarifies it. But, nevertheless, there is range of disturbing practices that needs to be conceptualised through a distinct category.

While any definition is unlikely to solve the problem of how to distinguish terrorism from other forms of political violence, it is possible to outline some of the significant features of contemporary terrorism. As many official and non-official definitions of contemporary terrorism suggest, it is self-consciously directed at non-combatants. They are not hurt or killed by accident; they are intentionally targeted. However, those who are killed are not the real targets of terrorism. This form of violence is directed at the civilian population in general in order to create fear and alarm in society as a whole. So, it’s possible to conclude that 21st-century terrorism is the politically motivated use of fear to disrupt and disorient a target society. From this perspective, it is not useful to call a murderous attack on an abortion clinic terrorism. The aim of this type of attack is specific – to shut down the clinic. It is not part of a general campaign to create fear throughout society.

It is important not to confuse terror with terrorism. Those who use terror are not necessarily terrorists. The Islamic State in Syria and Iraq deploys brutal terror against its opponents. But it is an organised political movement with an army attempting not just to scare societies, but to take them over. In contrast, an IS sympathiser who murders dancers in a nighclub in Paris is a terrorist.

Ultimately, it is not possible to avoid any normative and subjective assumptions about who to label a terrorist. Which is why the more carefully we use this word, the better.

(2) Invitation to Terror: The Expanding Empire of the Unknown, by Frank Furedi, Continuum Press, 2007