What the rotten anti-Rhodes movement reveals about 2015. 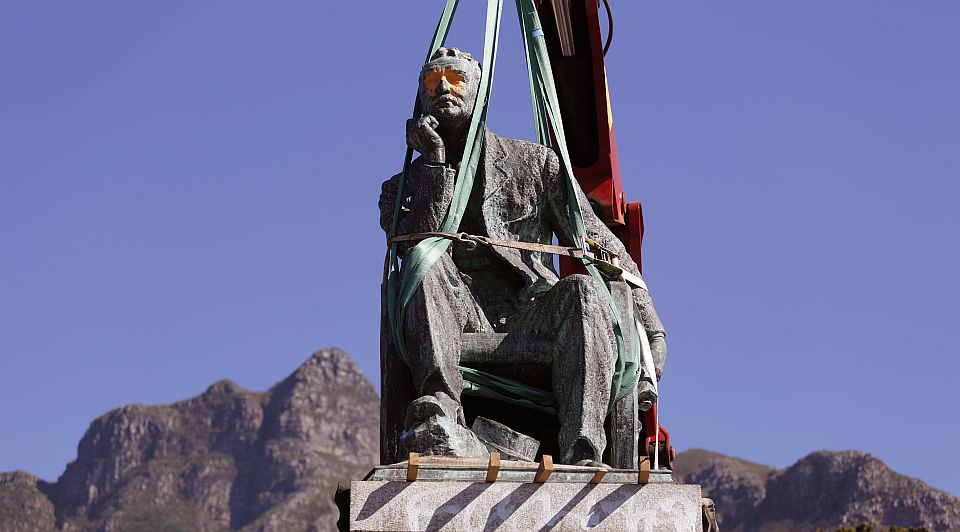 Rhodes Must Fall, the gang of spoilt Oxford brats who want a statue of the colonialist Cecil Rhodes removed from Oriel College, is being chalked up as another outburst of campus craziness. The media are having a field day mocking the hypocrisies and idiocies of the Rhodes-fearing students, one of whom is a Rhodes scholar — so he’ll take Rhodes’ cash but doesn’t want to look at his likeness — and all of whom describe walking past the statue as ‘an act of violence’. At the end of a year in which students have complained that doing yoga is ‘cultural appropriation’ and reading The Great Gatsby can trigger PTSD, Rhodes Must Fall is being viewed as the latest loopy pursuit of bookish youth who inhabit a different moral universe to the rest of us.

But to treat Rhodes Must Fall in this way is to miss a trick. For this movement is in fact infused with some very mainstream ways of thinking. The true engine of Rhodes Must Fall is the culture of victimhood, the view of the self as a hapless object to which things happen, upon which wicked words wreak havoc, a creature easily propelled into trauma by ideas or images or experiences. And that’s an idea which exists far beyond the quad of Oriel College, Oxford. Indeed, for all their pretences to radicalism — ironically fuelled by a media that treat them as extreme and exceptional — the Rhodes Must Fall people only express in gruff, Year Zero-style terms what is now one of the key, and most depressing, outlooks of the 21st-century West.

It is of course tempting just to slam the Rhodes Must Fall brigade. They typify today’s super-sensitive students, who fear the content of books and claim to be ‘triggered’ by the arrival on campus of anyone who has a different point of view to theirs. So they describe the statue of Rhodes as ‘aggressive’. They claim this stone representation of a man who plundered Africa harms black students. As I argued in a piece for Newsweek in August, Rhodes Must Fall is ISIS-like, sharing with those statue-smashing Islamists ‘a Year Zero attitude, a desire to rewrite history… to cleanse all remnants of a “problematic” past from the present’. This is the irony of today’s students who pose as caring: their flipside is a desire to destroy with extreme prejudice any idea or icon that offends them. They’re soft and tyrannical at the same time.

Yet Rhodes Must Fall is not some out-there group, as demonstrated by the fact that Oxford itself is kowtowing to it. It is better seen as a rougher expression of an everyday culture: the cult of the victim. The most striking thing about the Rhodes Must Fall activists is their self-negation of their moral autonomy, their reduction of themselves to mere products of history, created and damaged by historical circumstance and their cultural surroundings as surely as cells in a petri dish are rearranged by a scientist. They claim the statue of Rhodes does ‘violence’ to them. They say they are victims of ‘the colonial wound’. They argue that ‘the festering, rotting wound that is the ideology of white supremacy’ continues to do damage to ‘our black and brown bodies’.

Here, black students — intelligent, autonomous people — are reduced to mere ‘bodies’, shoved and shaped by the inanimate representations of history that surround them. One supporter of Rhodes Must Fall says it is unacceptable to have such ‘cultural detritus of empire’ on campus, as it can be ‘stifling for non-white students’, speaking to how history ‘continues to harm black and minority ethnic people living in Britain today’. The irony of a supposedly anti-racist movement treating black students effectively as bovine, as less capable than whites of negotiating public or controversial spaces, as acted upon by long-gone events, is as profound as it is dispiriting: in seeking to speak up for blacks, it actually diminishes their autonomy, their humanity.

What is most notable about Rhodes Must Fall is its treatment of history as a source of psychological trauma. Its supporters refer to the ‘invisible violence’ that is done to them — invisible because it isn’t actually happening — and talk about the ‘wound’ of history. Dr Omar Khan, director of the race think-tank the Runnymede Trust, argues that ‘seeing Rhodes so recognised [causes] a deep wound that isn’t merely in people’s heads nor in any way irrational’. That is, it literally wounds them, as a knife might.

This depiction of history as a wounding thing speaks to today’s cult of self-victimisation, the deep 21st-century urge to define oneself as a victim of circumstance rather than a shaper of destiny. Because the students who make up Rhodes Must Fall are among the most comfortable, cosseted young people in Western Europe, enjoying the extraordinary privilege of reading and thinking in one of the world’s oldest, most prestigious universities, they must trawl the past in search of victim status. Unable to find anything unpleasant in their cushioned lives, they instead plunder the suffering of earlier black generations in order to discover some hurt they might claim as their own. These are the very students most likely to complain about ‘cultural appropriation’, yet they engage in a most foul form of what we might call historical appropriation: they claim to feel the pain of the enslaved and the colonised as they sip tea in the swooning towers of Oxford. It would be like me demanding a ban on images of potatoes on the basis that they make me feel the stabbing hunger pains of my ancestors who perished in the Irish Famine.

What we’re witnessing is the rise of the transcendental victim, the victim who steals the long-passed pain of his ancestors or even of the dead with whom he has no connection whatsoever. Rhodes Must Fall isn’t alone in this. There’s now such a thing as second- and third-generation Holocaust survivors, the children and grandchildren of those who survived the Nazi death camps, who claim to experience Nazi-related ‘trauma’. Supporters of the slavery reparations movement claim it’s really hard for black people today to ‘endure this historical inhumanity’. This cynical use of history to construct a victim identity can also be seen in radical Islamism: Western Muslim youth claim to be motivated by anger over the Crusades, while al-Qaeda, ISIS and others talk endlessly about events of a thousand or more years ago. What ultimately binds the supposed leftists of Rhodes Must Fall with extremist Islamist youth is a cloying self-pity, an invented victim identity, a belief that society and history have conspired to insult them.

At a time of great misanthropy, when individuals’ capacity for autonomy is called into question and the idea of free will is ridiculed, Western society has come to value the easily harmed individual who demands therapy and recognition of his suffering over the self-motored, morally independent individual who believes that he can cut it by himself, with a little help from his friends, comrades, community. And in such a climate, those who lack victim status, who aren’t actually suffering, must hunt down insults, exaggerate slights, and build a case for their being wounded creatures equally deserving of social sympathy and state resources. We are incited to play the victim. This explains everything from the obsession with microaggressions to feminists’ obsessive logging of normal behaviour as ‘everyday sexism’ to Oxford students’ depiction of a statue as violence: it’s all an attempt to construct victimhood and thus win respect.

Strikingly, Rhodes Must Fall says it is engaged in the ‘politics of recognition’, demanding that Oxford and others ‘recognise’ the ‘effacement and violence’ historically faced by blacks. This isn’t an anti-establishment movement; on the contrary, it is a craven, knee-bent plea for the new establishment — the victim-therapeutic complex — to confer victim-legitimacy on middle-class black students who lack it. In an earlier era when the ideal of autonomy was more respected, individuals demonstrated their mettle by taking responsibility for their lives and being driven; in today’s climate of victim sacralisation, individuals are encouraged to play down their own moral resources, to disavow their own humanity, in essence.

So, yes, we can laugh at Rhodes Must Fall. We should, in fact. But to do only that would be to overlook the powerful anti-human trends infusing such a movement. As we head into 2016, let’s stop treating campus crazies who want to censor or smash things as alien creatures or ‘lefty nutters’, and recognise that in fact they speak to the diminished autonomy of our times. More importantly, let’s all refuse to play the victim game, to strip ourselves of moral independence in the hope of gaining recognition from a victim-obsessed state and society, and instead insist that we are not ‘bodies’ hurt by history, but rather are minds and hands that make history. History doesn’t simply happen to us; we happen to history.