Why The Donald trumps the opposition

The clueless attacks on Trump have fuelled his campaign. 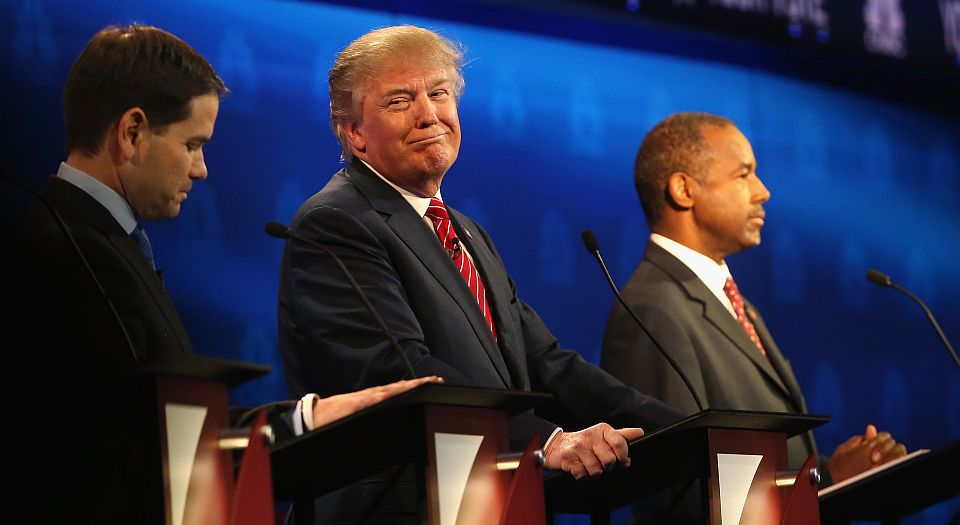 Donald Trump emerged from the pack of Republicans seeking the party’s nomination in June, after gaining notoriety for calling Mexican immigrants ‘rapists’. Pundits largely dismissed Trump as a celebrity blowhard, and his support was deemed a fad – the ‘Summer of Trump’. But, six months later, Trump is still on top of the field. With his call for a ‘total and complete shutdown’ on Muslims entering the US, Democrats and Republicans alike now see something much darker in Trump and routinely refer to him as a fascist. This Nazi, they now fear, has a real chance of going all the way to the White House.

Writing off Trump at first was complacent, and revealed how most commentators had assumed that American politics could never be open to an outsider like Trump – even at a time when trust in politicians is at a low-point. But the latest panicked outbursts over Trump also fail to come to terms with him.

While nearly everyone rushed off to denounce Trump as ‘un-American’ for his anti-Muslim immigration proposal, they didn’t stop to consider just how ridiculous that proposal is. As Trump later explained, his cunning plan amounts to asking would-be immigrants ‘Are you a Muslim?’. It was more ‘Springtime for Hitler’ than Final Solution.

Yet, as foolish as Trump can be, he has shown the capacity to play members of the establishment for even bigger fools. He certainly knows how to get a rise out of them, to his benefit. The timing of his anti-Muslim announcement was not accidental. Just the day before, President Obama had given a lacklustre speech about the terrorist threat, which did little to allay the fears of those who were on-edge following the San Bernardino attack. Trump seized on that disconnect and quickly whipped up a ‘policy’ that he knew would grab headlines. Sure enough, politicos and the media were duly outraged, Trump dominated the news, and his polling numbers got a nice bump upwards.

But it seems the US political establishment is highly selective in who and what it considers worthy of outrage and denunciation. Before Trump’s latest pronouncement, two other Republican candidates – Jeb Bush and Ted Cruz – had said that the US should limit Syrian refugees to those who are Christian. And Obama, in his Oval Office speech, called for tightening visa rules for people wishing to enter from certain countries – ones with predominantly Muslim populations. None of those schemes led to the kind of uproar Trump received for his.

When Trump proclaims that he will act unilaterally (say, to build a wall along the border with Mexico) and not let a ‘pathetically weak’ Congress get in his way, freaked-out onlookers hear a dictator-in-waiting. But I wonder where he got such notions. Could it be from Obama, who, in 2011, said: ‘We can’t wait for an increasingly dysfunctional Congress to do its job. Where they won’t act, I will.’ As Jonathan Turley points out, Obama has expanded presidential authority and has overridden Congress in areas from ‘healthcare to immigration to the environment’. Democrats cheered these moves, but now don’t like the thought of someone like Trump having such powers.

The obsession with Trump, the close monitoring of his every utterance, has reached the point that his political and media foes have – ironically – become important generators of support for him. Every time they tell Trump ‘you can’t say that’, he says it. Every time they demand an apology from Trump, he doubles down on it. Just by defying the strictures of political correctness, and not caving when challenged, Trump can look authoritative and daring.

The bipartisan frenzy over Trump backfires on the political establishment in other ways. As we’ve seen in the backlash to Trump’s suggested ban on Muslim immigration, the response has not been ‘here’s why Trump is wrong’; it has been ‘Trump is unacceptable’, ‘un-American’, a ‘fascist’. Opponents want to banish Trump and his supporters from polite society, rather than tackle the arguments that they raise. It is not unreasonable for Trump’s supporters to express concerns about terrorism and immigration, among other issues. But, too often, establishment figures fail to take these concerns seriously and provide counter-arguments. Worried about Islamic terrorism? You’re an Islamophobe. Worried about immigration? You’re a bigot.

Indeed, the denigration of Trump supporters is one of the ugliest aspects of the anti-Trump hysteria. As it became known that a core part of Trump’s support comes from those without a college education, some began to use that fact to dismiss his voters as ‘uneducated’, ‘low-information’ or just moronic. Trump fans are portrayed as excessively anxious about terrorism, irrationally so, and thus susceptible to being duped by a demagogue like Trump. But who is more fearful: Trump supporters or those who are freaking out over the possibility that more people will jump on Trump’s bandwagon?

Those core Trump supporters who are disparaged as the ‘uneducated’ are what we used to call the working class. Sections of the working class have been alienated from the political process in recent years. In the 2012 election, many white workers without a college education abstained rather than voting for Obama or Mitt Romney. Now that it appears that Trump has them engaged in politics, the establishment parties have only themselves to blame for ignoring them for so long.

But even if Trump does not ultimately succeed, his emergence nevertheless tells us a lot about the current state of American politics. Trump’s current ascent is, first and foremost, an expression of the disarray within the Republican Party. The fact that the non-Trump votes are splintered among many other candidates shows how factional the party is today. None of the main contenders – Bush, Cruz, Marco Rubio, Chris Christie, among others – has so far been able to present a compelling case. This was supposed to be the election in which Republicans would have an embarrassment of riches when it came to potential nominees, yet they are turning out to be just embarrassments. That a joker like Trump is on top is an indication of just how poorly the other Republican candidates have performed.

But it would be wrong to see Trump solely as the product of a chaotic Republican Party. His broadsides against political correctness and his emphasis on national security are clearly in response to Obama and the Democrats. And his complaints about weak, ineffectual and dishonest politicians are levelled against both parties. Trump has been on the offensive against the entire political establishment, slowly tearing down the old order. He has exposed a cross-party political elite whose instinct is to try to crush him, rather than make its own positive case for the future.