The ‘Yale snowflakes’: who made these monsters?

These little tyrants are the bastard offspring of older radicals. 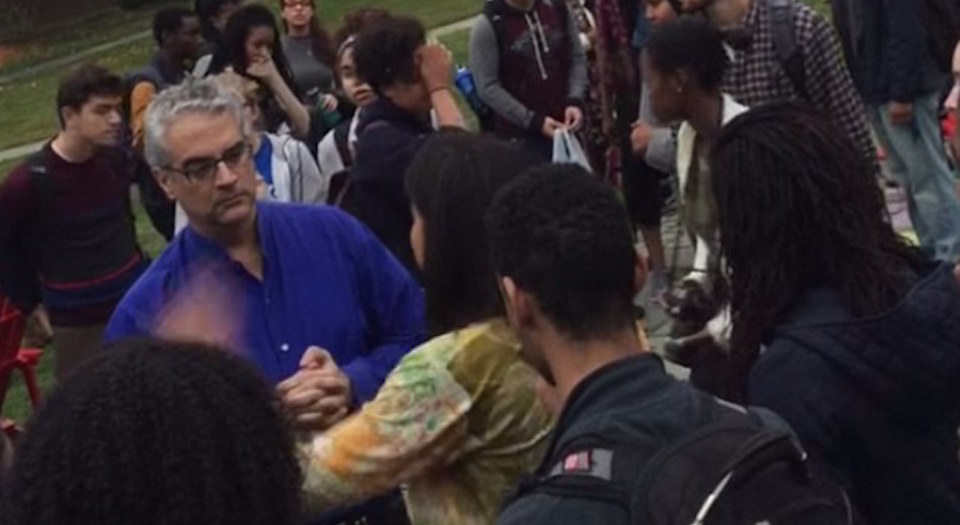 Video footage of Yale students losing the plot over a faculty head and his wife, who said everyone should calm down about Halloween, has caused much head-shaking in liberal circles. And it isn’t hard to see why. The head’s crime was that his wife sent an email suggesting academics and students should chill out about ‘culturally insensitive’ Halloween costumes. It’s okay, the email said, to be a ‘little bit inappropriate or provocative or, yes, offensive’ on this one day. For his wife issuing this mildest of rebukes to over-sensitive over-18s, the head was accosted by a mob of students insisting the email made them feel unsafe. When he told the crowd that he thinks university is about providing education, not a ‘safe home’, they screamed at him to ‘step down!’. ‘Who the fuck hired you?!’, the most unhinged of the students cries.

It’s unnerving, odd, a terrifying snapshot of the new intolerance. We could see the culture of ‘You can’t say that!’ in all its swirling, borderline violent ugliness. It wasn’t a whispered or implied ‘You can’t say that!’, of the kind we see all the time in 21st-century public life, in response to people who criticise gay marriage, say, or doubt climate change. No, this was an explicitly stated ‘You can’t fucking say that, and if you do we’ll demand that you be sacked!’ That it was stated at Yale, and in response to a bloody email about Halloween, has added to the hand-wringing among liberals, who want to know what’s gone wrong with the new generation.

Okay, fine. It is indeed interesting, and worrying, that students are so sensitive and censorious today. But I have a question for the hand-wringers, the media people, academics and liberal thinkers who are so disturbed by what they’re calling the ‘Yale snowflakes’: what did you think would happen? When you watched, or even presided over, the creation over the past 40 years of a vast system of laws and speech codes to punish insulting or damaging words, and the construction of a vast machine of therapeutic intervention into everyday life, what did you think the end result would be? A generation that was liberal and tough? Come off it. It’s those trends, those longstanding trends of censorship and therapy, that created today’s creepy campus intolerance; it’s you who made these monsters.

Over the past year, there has been growing concern in the media with the campus crazies who demand trigger warnings on books (lest their content induce PTSD), who cultivate Safe Spaces in which no bruising word may be uttered, and who try to crush everything from Robin Thicke’s ‘Blurred Lines’ (it makes female students feel unsafe) to talks by Germaine Greer (she makes trans people feel unsafe). From Jonathan Chait’s New York essay in January, which bemoaned the return of PC to the Western academy, to the current eyebrow-raising over the Yale snowflakes and their cavalier attitude towards ‘the crucial liberal tradition of free speech’, an anti-PC backlash has emerged, with 40-plus observers looking with horror at the foot-stomping Stalinists of the younger generation.

But there’s a problem with this backlash: it tends to treat this campus tyranny as the handiwork of a new generation. In the words of Todd Gitlin, there is a new ‘generational norm of fragility’. The New Statesman goes further, claiming today’s intolerant yoof are ‘rebelling against their parents’ generation and its liberal deification of free speech’. Excuse me? What liberal deification of free speech? The older generation – including some of very people going pop-eyed over the Yale snowflakes – has been chipping away at free speech for decades. And in the process they nurtured the world we now inhabit, in which words and images are seen as dangerous and our sense of self-worth is viewed as so fragile that we must squash anything, or idea, that threatens it.

The weepy students who think everything from ‘racist’ costumes to racy novels could cause them ‘mental harm’ did not invent the idea that words damage us and thus must be controlled. In Britain, and across Europe, we’ve seen the spread over the past 40 years of hate-speech legislation that punishes ‘insulting’ or ‘grossly offensive’ commentary about minority groups. On campuses, this has manifested itself as a student-led No Platform policy in Britain, which first expunged racists and Zionists and was later applied to Islamists, sexists, tabloids and Eminem’s music. In the US, the modern turn against free speech manifested itself in the scourge of campus speech codes, which spread across the nation from the late 1980s, and which described everything from racist speech to ‘inconsiderate laughter’ as contributing to the creation of a ‘hostile environment’. In the words of one of the academics who wrote one of the speech codes – they were mainly the work of academics, not students – certain forms of speech are ‘assaultive’ and can cause ‘severe psychological trauma’ (1). That was said in a book tellingly titled Words that Wound, in 1993, before today’s snowflakes were born. And we wonder why youth see books, speakers and songs as forms of assault. That idea has been seeping through the academy, from the top down, for more than 20 years.

Closely related to this institutionalisation of censorship has been the relentless rise of the therapeutic outlook. This new view of humanity eschews the old John Stuart Mill attitude – which celebrated self-government, the ‘firmness and self-control’ of the individual – and replaces it with a view of individuals as weak, threatened, easily damaged by horrible happenings, cutting words: ‘scarred for life’. On campuses in Britain and the US, this autonomy-slamming outlook could be seen in the spread of wellbeing classes, an obsession with student stress, the introduction of ‘therapy dogs’ (seriously), and various other measures designed to stroke allegedly fragile students’ sense of self-worth rather than let them negotiate life’s ups and downs for themselves. If they think of themselves as weak, so weak they cannot read an email, that really isn’t surprising: we have been telling them they’re weak for 20 years.

Mercifully, most students are still quite sensible. They don’t cry when they get an email or balk from reading offensive novels. That Yale mob was small. But the sensible students will have to wage war, not against their more pathetic fellow students, but against the vast illiberal, autonomy-demeaning ideologies that emerged in the late 20th century under the watchful eye, and often with the enthusiastic backing, of today’s tut-tutters over censorious campus life. They should rise up, not so much against the snowflakes as against the critics of the snowflakes, who shamelessly mock students who can’t handle an email while avoiding their own moral culpability in the creation of the unhinged, unfree climate currently crippling daring thought and open debate across the Western world.