Merkel and Co have turned the refugee crisis into a moral conflict. 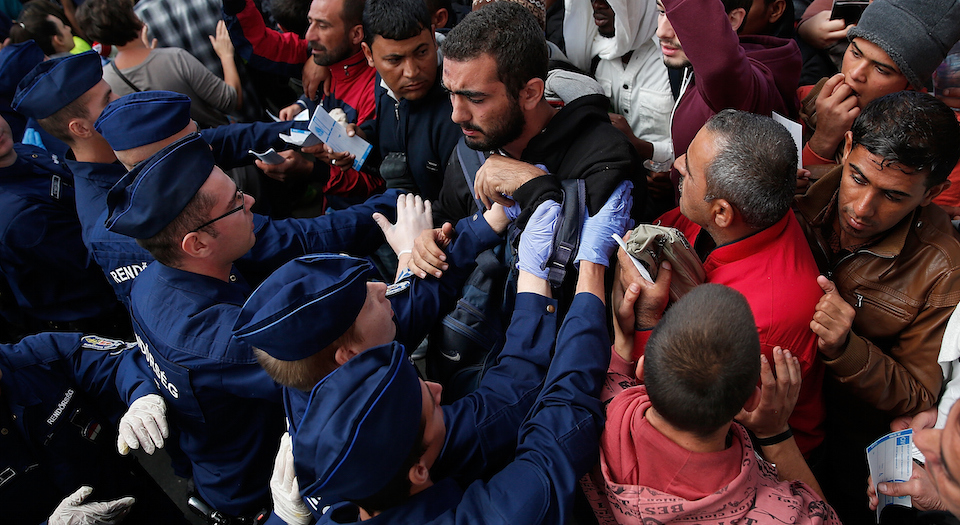 The migrant crisis has seemingly divided Europe along moral lines. On the right side, the side of compassion, of progressiveness, you have the states of Western Europe. They’re the good guys, the guys standing at the head of the European Union, drawing up migrant quotas for EU member states, allocating people here, distributing people there, protecting people, saving people. They really care – really care about the hundreds of thousands of people fleeing the sites of various Western interventions, from Iraq to Libya to Syria. So much so, in fact, that the EU’s leading power, Germany, with chancellor Angela Merkel to the fore, and the European Commission are talking about a further centralisation of EU member states’ border-control powers and the creation of a ‘permanent mechanism’ to ensure the speedy and compulsory distribution of migrants throughout Europe. That’s how morally upstanding Western Europe is, how determined it is to do the right thing by those seeking refuge from the tumult and unravelling of the Middle East and North Africa.

But on the dark side, the side of regress, the side of iron crosses and vestigial fascism, you have Eastern Europe. Hungary, Poland, Slovakia… These are the bad guys, the nations with demogogues in power and populations ill at ease with massive influxes of non-European people. At every stage of the migrant crisis, they have resisted the pro-migrant entreaties of the West. Within the EU’s assorted voting chambers, they opposed mandatory quotas, and, outside, their people have staged anti-migrant protests, and their governments have railed against the immigrant wave, with Hungary’s conservative leader, Viktor Orbán, warning of an Islamic threat to Europe’s Christian identity. While Merkel was busy welcoming migrants into Germany, the old Eastern Bloc-kers have fortified their borders, erecting razor-wire fences, and stationing riot police at key crossing points.

This, at least, is the narrative: a compassionate, pro-migrant West is fighting back the anti-migrant sentiments of the East. You only have to listen to Merkel to hear the moral self-aggrandisement at work. It is as if the migrant crisis is a chance to demonstrate the virtue of the EU, a golden PR opportunity to conjure up the EU elite’s moral authority. ‘Europe must show it is a continent of values, a continent of solidarity’, she said recently. European Council chief Donald Tusk echoed Merkel when he warned against ‘populism and xenophobia’ in Europe’s midst, and then declared: ‘Our political aim should be to strengthen Europe against right-wing extremists, and not to become like them.’

More sinister still has been the suggestion that Eastern Europe’s migrant problem, its refusal to let them all in, has its roots in its unconfronted past – the past of pogroms, of persecution, and, more pointedly, a barely suppressed fascism. Never reckoned with, this past is now erupting all too easily into the present. Merkel herself riffed on Eastern atavism when she accused the region of failing to learn from history. Austrian chancellor Werner Faymann, speaking to Der Spiegel, was more explicitly allusive: ‘Piling refugees on trains in the hope that they go far, far away brings back memories of the darkest period of our continent.’ The Polish-born Princeton historian, Jan Gross, went even further in an article for Die Welt, when he asserted that eastern EU states had ‘proven to be intolerant, narrow-minded, and xenophobic’: ‘German society, which has become conscious of its historical crimes, has learned through them how to approach moral and political challenges like the current influx of refugees. Eastern Europe, on the other hand, has yet to come to terms with its murderous past.’

It’s a striking vision of a Europe divided between the drivers of progress in the West, and the prisoners of the past in the East. In this story of the migrant crisis, Hungary, the Czech Republic, and assorted Balkan states appear to be in desperate need of the West’s 21st-century moral instruction.

But not only is this simplifying narrative, in which the forces of EU light battle the Eastern darkness, a work of fantasy, it’s also fantastically divisive. It helps to create a culture war between East and West, constructing the migrant crisis as a moral conflict between progressive and backward attitudes, between rainbow-hued notions of tolerance and diversity, and grey, oppressive visions of homogeneous cultural identity.

But what is being played out as a culture war between West and East, a battle between good, pro-migrant and bad, anti-migrant attitudes, is not what it seems. Rather, lurking beneath and informing the simplistic moralising gloss is an antagonism between the EU elite’s transnational statecraft and Eastern member states’ embattled sense of sovereignty. Yes, the likes of Orbán’s ruling Fidesz Party in Hungary or the newly elected Law and Justice Party in Poland are broadly anti-immigration. But the inflammatory issue here is the extent to which Eastern European states are having open borders – or mandatory quotas – imposed upon them. These are states with a dwindling ability to control their own state boundaries. Note the air of futility hanging over Slovakian interior minister Robert Kalinak’s desperate claim to ‘have the government’s and the parliament’s mandate to veto any questions concerning the [migrant] quotas because they don’t make any sense’. As Kalinak was to discover, it didn’t matter what mandate he had – it was always going to be trumped by the EU’s edicts.

We at spiked have always publicly argued for complete freedom of movement. But the EU is not ‘publicly arguing’ for freedom of movement. Rather it is imposing its own border policies from afar, regardless of the thoughts and wishes of the people that live in the countries most affected. And what’s worse, it is presenting opposition to its migrant policies not as a legitimate, alternative viewpoint, but as morally backward, a strain of residual Nazism in the EU’s midst. The EU’s pro-migrant posture is experienced by those in the East as an imposition, a disempowering order from upon high that further undermines any sense of control people in the East still had over their lives. Little wonder Orbán accused Merkel and the EU of ‘moral imperialism’, of telling a whole people what they ought to think and feel.

The effect of the EU’s prosletysing and grandstanding over the migrant crisis has been deeply damaging to any sense of solidarity among people. It has deepened the divide between the leading, richer, Western member states, and the poorer, subordinate members. A political argument over who controls national borders has been transformed by the EU elite into a personal, cultural and moral conflict over the virtues of the people of an entire region. And, what is most tragic about all this is that the migrants themselves come to appear not as potential fellows, but as the shock-troops of the EU’s culture war, a threatening, alien force come to correct recalcitrantly backward nations. Thanks to the EU’s moral and cultural edicts, then, the sense of cultural loss and imperilment experienced by some in the East, which has been exacerbated as thousands upon thousands of migrants started arriving from the war-torn south, has likely become not only more entrenched, but more militant, and more angry, too. Once again, the EU has shown that it does not unite people; it divides them.