No, the Suffragettes were not racists

The fuss over Suffragette exposes the madness of identity politics. 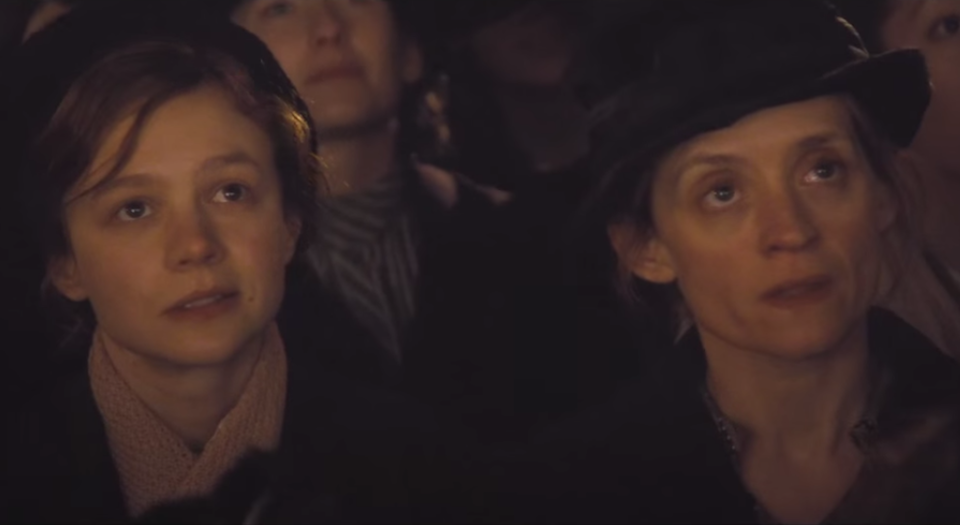 The first film account of the British Suffragette movement, starring Meryl Streep as Mrs Pankhurst, was bound to stir up strong feelings. But the attacks on it from the left are surprising, and misplaced.

‘I would rather be a rebel than a slave’, said the founder and leader of the modern movement to give women the vote, Emmeline Pankhurst. The quote was used in a publicity photo for the film, on t-shirts worn by Streep and co-star Carey Mulligan, drawing attacks from anti-racist campaigners in America. DeRay Mckesson, the leader of We The Protesters, tweeted his shock, and the Twittersphere exploded.

The objectors thought it grotesque that anyone could mix up black slavery with the domestic servitude women suffered. But such servitude was pretty onerous. When Mrs Pankhurst took up the fight, women were kept out of all public life and largely out of paid work, and were without rights to property against their husbands. Summing the whole thing up, they were denied the vote.

The Suffragette movement in Britain was a mass movement like none other, before or since. It was intelligent and militant. It lobbied members of parliament and burned down churches. Tens of thousands of women were active in the women’s suffrage movement. But were they, as has been claimed, racist?

No, they were not. The women’s suffrage movement had many different shades of opinion in it. Some were quite traditional on some questions. But others were very radical. On the questions of race and Empire, highlighted by the critics, Suffragettes were generally much more advanced than the mainstream of life at the time.

Among their number, Suffragettes included Sylvia Pankhurst, Emmeline’s daughter, who fought against racism in Britain when there was not even a name for it. Sylvia’s newspaper (first called the Women’s Dreadnought, and then the Workers’ Dreadnought) called out the racism of the labour movement. Labour leaders had protested against the use of coloured troops in the French occupation of the German-speaking Rhine. England’s socialist press carried stories about the ‘black horror on the Rhine’: the rape of white women. Sylvia got Claude McKay to expose the racial prejudice behind the allegations. She went on to challenge colonialism in Africa, attacking Italy’s occupation of Libya and invasion of Ethiopia, as well as Britain’s presence in Somaliland.

Sylvia was hardly alone among Suffragettes in challenging British imperialism. Charlotte Despard, Eva Gore-Booth and her sister Constance Markievicz were all supporters of the Irish rebellion against British rule. In fact, Markievicz was a military commander in the uprising of Easter 1916, and it was at her prompting that the demand for ‘equal rights and equal opportunities’ found its way into the proclamation of an independent Irish Republic.

Suffragette Dora Montefiore was also a strong campaigner against the Empire and for the rights of native peoples. Agitating in South Africa against the new emerging Apartheid system, she wrote that ‘when the day of reckoning comes between the black races and the white, the descendants of the present exploiters will have to answer for the greed and inhumanity of their forefathers’.

Objectors like Rachel Décoste have accused the new film of airbrushing people of colour out of the history of the Suffragette movement, often while drawing attention to a photograph of a contingent of Indian women on a suffrage march that was not shown in the film. This is a bizarre objection. Sophia Duleep Singh, who organised the contingent of five Indian women, was a remarkable person. But there were no more than a couple of thousand Indian women in Britain at the time, mostly visitors rather than residents, and the five in the photograph are about as many as took part in the movement.

Others have pointed to the example of the Suffragettes who joined Oswald Mosley’s Blackshirts. There were a handful, including Norah Elam. This is a story that has been told a few times, because it is so incongruous. But to leap from there to the idea that the Suffragettes had something in common with the Blackshirts is a leap too far. Kid Lewis, the Jewish boxer, also joined Mosley’s New Party, even standing for it in the elections. But nobody yet has claimed that Jews were part of the British Union of Fascists’ social base. Many Labour Party supporters followed Mosley into the New Party, including, for a while, the ‘Marxist’ John Strachey. Suffragism was a mass movement that drew in many people of all kinds.

Similarly, many have pointed to Antoinette Burton’s research into the way that Millicent Fawcett and Josephine Butler campaigned over the rights of Indian women while endorsing the role of the British Empire (Burdens of History: British Feminists, Indian Women, and Imperial Culture, 1865-1915, (1994)). These things happened, but they were hardly characteristic of the Suffragettes as a movement.
The claims that the Suffragettes of Britain and the US were indifferent to slavery are particularly misplaced. As historian Clare Midgley has shown in the case of Britain, women were the footsoldiers of the anti-slavery movement, though they were rarely allowed to speak on anti-slavery platforms (Women Against Slavery, 1992). Many of the women who campaigned against slavery in Britain went on to become the early suffrage campaigners.

Astonishingly, the same charges of racism are levelled against the founders of the American women’s movement – in particular Elizabeth Cady Stanton and the others who first launched the American suffrage movement at Seneca Falls in 1848. It is an astonishing claim because these women had all worked tirelessly in the campaign against slavery. Stanton, the Grimké sisters and the others at Seneca Falls, having seen slavery abolished, turned their attention to women’s suffrage.

Objectors have claimed that Stanton opposed the Thirteenth Amendment abolishing slavery because she was a racist. But Stanton objected that the amendment freed black men while denying women the vote. It was a sectarian point that served her reputation ill. But to claim she was motivated by racism is to deny the decades she gave to black liberation.

There is one important point to the objections. Strategically, Emmeline Pankhurst made a disastrous mistake when she agreed to suspend suffrage campaigning throughout the Great War, on the promise of getting the vote afterwards. What was given was less than adult suffrage, and many, including Sylvia, thought it was a great betrayal.

These criticisms, from the standpoint of holding the movement to its own promise, may well be justified, and these were arguments that were had out in the movement at the time. But the criticism that the Suffragettes did not have good politics on the race question is hardly pertinent. They were not agitating on the race question. Even if they had all had appalling politics on the race question, it would not diminish their struggle for the vote. But in any event, the historical record is that the Suffragettes, as you would imagine of such a remarkable group of forward-looking women, were way in advance of the prejudices of their day.

There is a modern impulse behind the criticisms of the film Suffragette. Similarly Roland Emmerich’s film of the Stonewall riot against police persecution of gays has been slated for its failure to highlight the role of black and trans activists in the protests (a criticism definitively exploded by Brendan O’Neill in the Spectator). The impulse is to qualify every expression of liberation as falling short of the modern ideal of intersectional correctness. Unless a movement can dot every ‘i’ and cross every ‘t’ of contemporary Social Justice Warriors’ preoccupations, it is deemed unworthy. At its core, this is not a liberation agenda at all, but the insecurity of tone-policing clicktivists when confronted with the record of a real social movement.

The real problem these hashtaggers have with the Suffragettes, and with Suffragette, is that it makes them feel a bit small. They worry that their own preoccupations look a bit trivial in comparison. That explains the strident appeal to moral authority, which in truth is just what history shows that they lack. But if the Suffragettes make you feel small, there is a simple answer: get up off of your knees and shake their hands.

James is speaking at the debate The 1916 Easter Rising: Ireland’s history wars at the Battle of Ideas festival on Sunday 18 October. Get your tickets here.

Watch the trailer for Suffragette: