Class War vs Cereal Killer: a riot for poverty 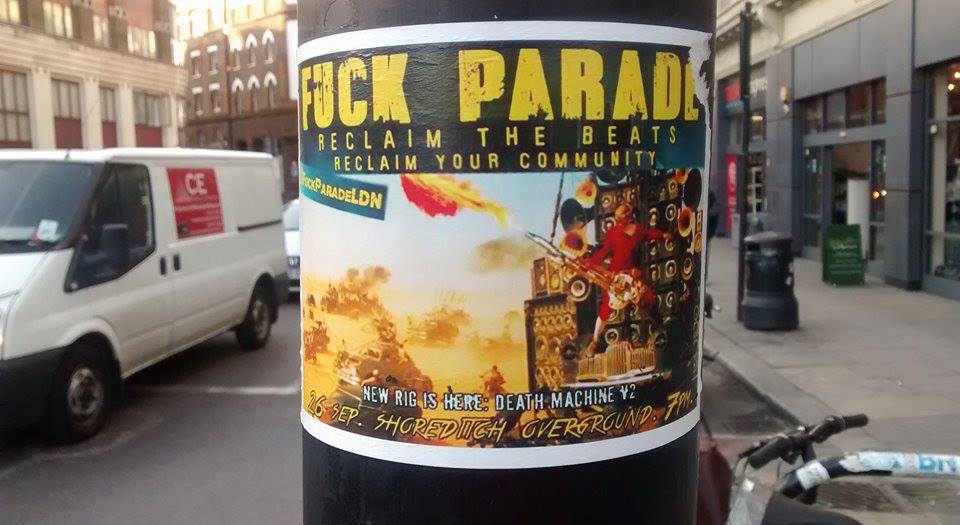 On Sunday night, a mob of 200 anti-gentrification protesters descended on Shoreditch in east London as part of an event called Fuck Parade. The event, organised by bedraggled anarchist outfit Class War, featured a burning wicker policeman, balaclavas aplenty and an alleged attack on a dog. It culminated with the mob vandalising the Cereal Killer café on Brick Lane and threatening its terrified customers with smoke bombs and burning torches. Cereal Killer’s crime? Well, according to Class War, the owners are part of the social cleansing of the previously run-down area.

Cereal Killer has become synonymous with the gentrification brought to Shoreditch by hipster culture. With customers happily paying up to £3.50 for a bowl of cereal, it is testament to the revival of the previously impoverished area. And it is this newfound affluence that provoked the anger of Sunday’s mob; the Facebook event claims that the community is being torn apart by the influx of ‘Israeli scumbag property developers, Texan oil-money twats and homegrown Eton toffs’. The anti-gentrification sentiment that Class War expresses indicates an aversion to economic growth, and an aversion to investment in the community, which it claims to represent. Surely the most immediate threat to the local community is mob vandalism and intimidation from within, not economic investment from without.

The café was attacked while it was still open, and the panicked customers were forced to take shelter downstairs as a smoke bomb went off and red paint and cornflakes were hurled at the shopfront. The vandals wore masks and balaclavas as they shouted abuse, and one man spraypainted ‘Scum’ on the café window. Does selling expensive cereal to happily paying customers make you scum? No. But intimidating the members of the local community that you claim to defend certainly does.

The gentrification that the café represents should be celebrated. The two men who founded the café, Irish-born twins Gary and Alan Keery, employ a number of local people and are among a number of entrepreneurs who have helped to revive the previously unpleasant area. There is no agenda of social cleansing here, as the mob’s organisers claim.

The ‘progressive’ media has helped make this small business the target of such bile. Given that gentrification represents entrepreneurship and is indicative of progress, it is ironic that so-called progressives take such issue with it. The Guardian has taken potshots at the café in the past, and it even published a piece by one of the protesters hours after the Fuck Parade took place. When I spoke to the café’s manager, Matt Moncrieff, he said the attack was definitely ‘influenced by the café’s media coverage’.

Class War claims to represent a local community that is sick of rising house prices and an influx of wealth from overseas. However, Cereal Killer employs people from the local community, and many more residents come to the café to socialise and bond over a bowl or two of Coco Pops. The café remains defiant in the face of bullying and intimidation, and locals have since rallied behind it, with other businesses dropping off care packages for the owners. Moncrieff told me that footfall has actually increased since the attack.

The Fuck Parade was made up of a small core of balaclava-wearing pillocks and a lot of posers. People who rail against gentrification are, thankfully, the minority, and they have no right to speak for residents who are probably too busy enjoying new amenities and job prospects to protest.

Gentrification is not part of some conspiracy against the poor. Opportunities for people in Shoreditch to improve their lives are growing, and that is no bad thing. Fortunately, a bunch of idiots throwing cornflakes at a shopfront won’t change that.

George Harrison is a writer and student.