Don’t believe Republican candidates who say Christianity is under siege. 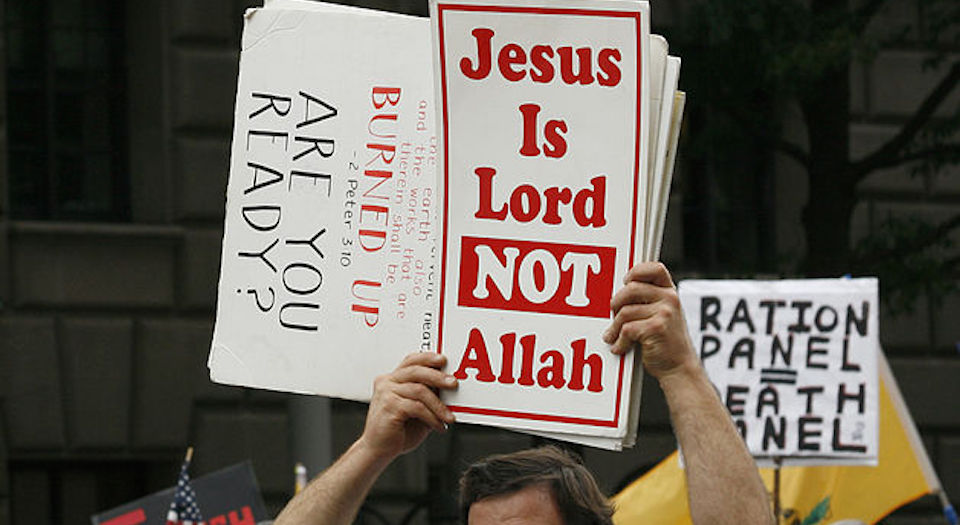 In America, where God is presumed to care about the outcome of football games, and pre-game prayers are about as common as post-game concussions, presumptions about God’s political preferences are hardy perennials. God, it seems, is even a Republican strategist: He reportedly encouraged Wisconsin governor Scott Walker to drop out of the crowded Republican presidential race. Running out of money and support (he was polling under one per cent), Walker framed his departure as a sacrifice suggested by the Almighty. ‘I was sitting in church yesterday’, he explained. ‘The pastor’s words reminded me that the Bible is full of stories about people who were called to be leaders in unusual ways. Today, I believe that I am being called to lead by helping to clear the field so that a positive conservative message can rise to the top of the field. I encourage other Republican presidential candidates to consider doing the same.’

Eventually other candidates will heed this call, when they hear it from their donors and pollsters (unless they believe in electoral miracles). But the continuing presence of God in the race is assured, along with increasingly rabid sectarianism. The Obama administration (and by implication, the Democratic Party) is ‘the most anti-Christian in American history’, according to minister, former Arkansas governor and aspiring president, Mike Huckabee. You might think that welcoming the Pope Francis to the White House was at least one sign of friendship toward Christians. You’d be wrong, Huckabee suggests, because the 1,500 people invited to a White House welcoming ceremony included a gay Episcopal bishop, an activist nun, and a gay Catholic blogger.

But the pope seems less troubled by the existence of gay people than Huckabee, and, in any case, the presence of a few Catholic dissidents in this large welcoming crowd is not the source of belief in Obama’s ‘anti-Christian’ biases. ‘Evidence’ of his hostility toward Christianity is the fantasy that Obama is a Muslim, shared by anywhere from a third to over half of Republicans surveyed.

What if the fiction about Obama’s embrace of Islam were fact? Would he have a right to hold office? Not according to popular presidential candidate and celebrity surgeon Ben Carson. He has suggested that election of a Muslim president would be unconstitutional. Islam is ‘inconsistent’ with the constitution, Carson claimed, displaying his ignorance. The US Constitution explicitly bars any religious test for office, as a few other candidates and numerous commentators immediately pointed out.

So, claiming he’d been misquoted, Carson qualified his remarks, explaining that he might not oppose a Muslim who ‘renounced the central tenant [sic] of Islam: Sharia Law’. Carson would allow for a prospective president with ‘a Muslim background’ who will ‘accept the way of life that we have, and clearly will swear to place our constitution above their religion’.

Of course, in America a commitment to exercising official powers in accordance with the constitution, and not personal religious beliefs, is required of every office holder of every religion. But Carson applies it selectively. In his view, Kim Davis, the Kentucky county clerk who defied a court order to issue marriage licenses to gay couples, should be exempt from the obligation imposed on Muslims to ‘place the constitution above their religion’. Her religious opposition to fulfilling the duties of her office ‘should be accommodated’ under the First Amendment, Carson asserts.

He is hardly an outlier in his suspicion of Muslims or his belief that the rights of Christians, like Kim Davis, are greatly at risk. A majority of Republicans say they would not support a Muslim president and nearly a third of Republicans surveyed in Iowa, an important early caucus state, believe that Islam should be illegal. Several Republican candidates, Senator Ted Cruz, Louisiana governor Bobby Jindal and sometime libertarian Senator Rand Paul, all agree that Davis’s rights have been violated. Mike Huckabee believes that her jailing proved ‘the criminalisation of Christianity in our country’.

Does Huckabee believe his own hyperbole? God knows. But it resonates with a segment of the Republican base. Over two-thirds of Iowa Republicans, for example, agree that Obama is ‘waging war’ on Christianity. This belief that Christians are under siege is not new. It does, however, have renewed potency now that same-sex marriage is a constitutional right, generating predictable conflicts between religious beliefs and civil-rights laws. Tensions between rights and liberties are common in our pluralistic democracy, and reasonable people will disagree about resolving them. Current conflicts between small-business owners who oppose gay marriage and gay couples seeking their services are important but also relatively mundane, not apocalyptic.

Tell that to Republican presidential candidates. The claim that Christians are being persecuted is a campaign theme echoed by almost every candidate — including newly minted Christian warrior Donald Trump. ‘There’s an assault on anything having to do with Christianity’, he complains. After all, ‘they don’t want to use the word Christmas anymore at department stores’.

Now that the self-worshipping Trump has found God, his antics offer an inadvertent satire of Godly politics. He humbly concedes that his book, The Art of the Deal, is second to the Bible. He acknowledges God’s greatness, as well as his own. ‘I mean, God created this’, he proclaimed, pointing to one of his golf courses … So nobody, no thing, no there’s nothing like God.’ If you believe in God, you might wonder if He’d return the compliment.

Wendy Kaminer is an author, lawyer and civil libertarian.

Wendy will be speaking at ‘Freedom of religion: the forgotten liberty?’ at our First Amendment conference in Washington DC on Thursday 15 October. Get your tickets here.