Bono and Co should not be allowed to police the language of the debate. 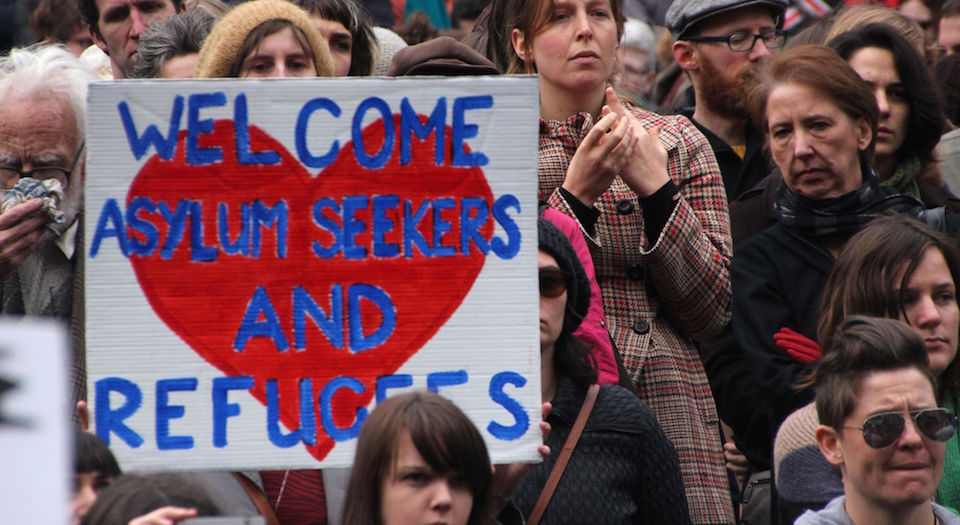 What is the most important issue in the debate about the crisis on Europe’s borders? Is it the causes of the conflict in Syria? Or the consequences of allowing thousands more people in or trying to keep them out?

None of that, apparently. To judge by the attitude of some campaigners and their celebrity spokesmen, it appears that the most important thing when discussing the transient masses is to use the correct words to describe them. As so often these days, the attempt to impose a linguistic etiquette is being used to limit what can be said, which opinions have a right to be heard. This process risks stifling the open argument required to decide what we should do.

In the Newspeak of the crisis, the rule appears to be: ‘”Refugee” Good, “Migrant” bad’ (excuse mixed Orwell references). If you transgress the rules and use the wrong words you chance being shouted down as at best xenophobic, at worst some sort of Holocaust denier.

Bono, frontman for celebrity righteousness, spelt it out this week addressing a world poverty event at Expo 2015 in Milan. ‘We should not use the word “migrant”’, declared the Christian rock crusader. ‘”Migrant” is a political word, used to take away the real status of these people. They are refugees. They are running from war.’ They do not want ‘to live in Italy or Ireland’ declared Bono, for any reason other than safety. His attempt to ban the word ‘migrant’ was cheered to the rafters.

So, what’s in a name? At one level this focus on language trivialises the issue. In the age of You-Can’t-Say-That, the West’s cultural obsession with restricting speech and sanitising language means more importance is often attached to words than to the deeds they describe. Image can take precedence over reality.

This trivialisation was well illustrated at an early stage of the crisis, when professional rent-a-gob Katie Hopkins’ unpleasant views about Africans trying to reach Europe by boat – let the ‘cockroaches’ drown etc – seemed to cause rather more public/online outrage in the UK than the actual drowning of hundreds of desperate people that prompted her remarks.

At another level, however, this is worse than trivialisation. It distorts and seeks to dictate a much bigger discussion. The attempt to police the words we use is also about policing how we should see and react to the crisis. In particular it influences whether we view the masses trying to enter Europe as passive, dehumanised victims deserving pity, or active human agents to be treated as equals.

Refugee, to cite Bono, is also ‘a political word’ which is used instrumentally to impose a definition on ‘the status of these people’. It means, according to the dictionary definition, ‘a person who has been forced to leave their country in order to escape war, persecution, or natural disaster’. The 1951 UN Refugee Convention says that a refugee left their country ‘owing to a well-founded fear of being persecuted’.

In other words, refugees are seen as hapless victims, with no control over their circumstances, ‘forced’ to flee. As such, international law and morality says we have a duty to offer refugees short-term refuge until it is safe for them to return to their own country.

A migrant, on the other hand, is something different, defined in the dictionary as ‘a person who moves from one place to another in order to find work or better living conditions’. A migrant is not only fleeing his own country, but is doing so to seek a better life in another country. A migrant is deemed an active agent trying to shape their destiny, albeit often in desperate conditions.

The etymological origins of ‘migrant’, even further back than the Latin migrare, apparently lie in an ancient Greek word meaning ‘to change, go, move’. The status of migrant strongly implies a positive attempt to change your life by seeking work and a home in a new country.

That is not how campaigners and their media supporters want to see the transient masses depicted. They fear they cannot sell that image to a European public they see as little more than a xenophobic mob. Instead, the more pathetic they can make those labelled refugees appear, the better.

This involves downplaying some inconvenient facts. It means focusing the cameras on the relatively few women and children, time-honoured symbols of the helpless refugee, and not noticing that the overwhelming majority gathered at the borders are young men, who have left their families behind as they go off to seek new lives – normally known as migrants. It means not asking why, if these people are simply refugees seeking shelter from war, so many apparently don’t want to seek refuge in Turkey, Greece or Hungary but seem determined to travel on to Germany, heartland of the Euro-economy.

The attempt to police the language of the migrant/refugee debate is the latest example of what my book Trigger Warning calls ‘the war on words’. This is a war that risks creating a wider chilling effect on freedom of expression, making people too worried about the correct linguistic etiquette to say what they really think, and too anxious about possibly causing offence to speak clearly. The danger is that words lose their meaning.

Instead of meaningful debates between honest opposing viewpoints, we will be left with empty exercises in tiptoeing around words that have become detached from reality. An obsession with using the correct language and code words, rather than saying what we believe to be right, is a recipe for self-censorship and empty apologies rather than clarity through argument.

The ‘Refugees good, Migrants bad’ rule does nobody any favours. Those who want to win the case for allowing more people in will have to do so openly, with no linguistically correct attempts at censorship. If our supposedly free and democratic society wants to live up to its name, there can be no barriers to or refuge from free speech.