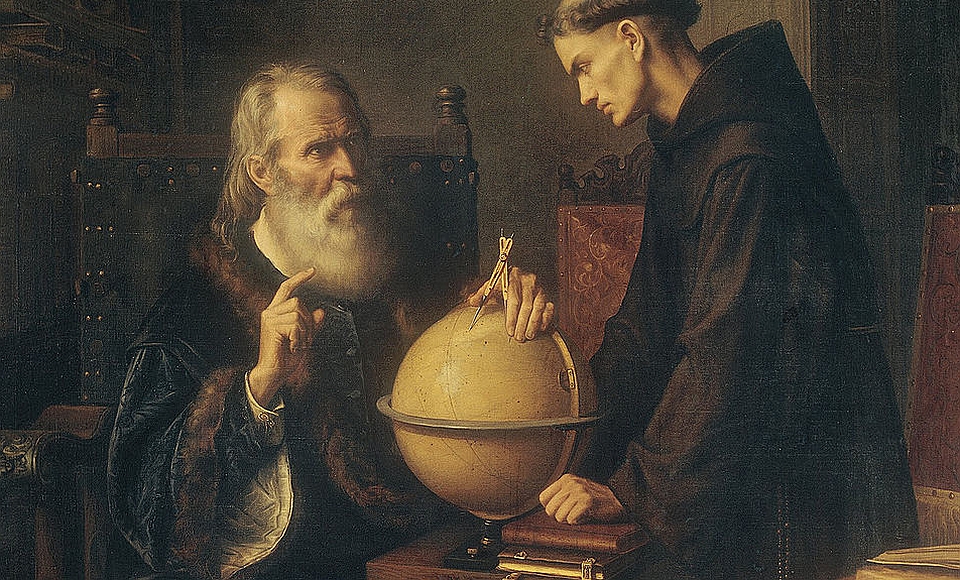 The front cover of Alice Dreger’s Galileo’s Middle Finger: Heretics, Activists and the Search for Truth in Science features a detail from Félix Parra’s 1873 painting, Galileo Galilei demonstrating his new astronomical theories at the University of Padua. The great scientist’s raised right hand is pixelated, suggesting that the provocative gesture indicated by Dreger’s title has been censored in deference to contemporary sensibilities. Dreger, a Chicago-based medical historian, explains in her introduction how she stumbled upon a relic of Galileo’s finger in an exhibit at a museum in Florence and thought the image of ‘the old man eternally flipping the universe the bird’ captured the Galilean spirit she seeks to defend and promote in her work.

Yet the ready availability of Parra’s painting on Google images immediately reveals a problem with Dreger’s conceit. The digit which Galileo is raising in the picture is his index finger, as he stands holding a measuring device to a globe in his left hand, evidently explaining his discoveries to a tonsured monk (who is cropped from Dreger’s cover). Galileo is not making what would be understood by today’s viewers as a defiant, contemptuous, even obscene gesture. He is using his index finger in that most fundamental of human communicative acts: pointing, what Raymond Tallis characterises as ‘a means of indicating a transcendent world – general, hidden and shared – that takes us decisively out of our solitary, transient bodies, subject to the laws of nature’ (1). As Parra’s title confirms, Galileo is here ‘demonstrating’ his theories – he is directing the attention of his listener, showing him something in the natural world that was previously hidden.

Dreger recognises that Galileo’s pioneering genius lies in the way he actively argued for ‘a bold new way of knowing, openly insisting that what mattered was not what the authorities – ancient or otherwise – said was true, but what anybody with the right tools could show was true’. Yet Dreger has a particular sympathy for what she regards as ‘the Galilean personality’: his ‘contentious nature, his belief in the righteousness of science, his ego, his burning knowledge that he and Copernicus were right’.

In her promotion of the Galilean spirit, Dreger provides a number of case studies of controversies in American science in which she has been involved over the past two decades. These include the treatment of intersex children (including measures to prevent the masculinisation of female fetuses affected by congenital adrenal hyperplasia), transgender issues, rape and sexual abuse, and the long-running anthropological disputes over the Yanomami indigenous people who live in the rainforest between Venezuela and Brazil. The – somewhat elusive – common theme is that of ‘Galilean’ scientists struggling against prejudice and dogma, misrepresentation and censorship, smears and false allegations, and discrimination by academic and professional authorities.

Dreger reports the case of Mike Bailey and Ray Blanchard, who were subjected to a virulently hostile campaign by transgender activists over their unpopular theory of ‘autogynephilia’; and that of Craig Palmer and Randy Thornhill, who faced a similarly abusive campaign from academic feminists over their sociobiological theories of rape. Perhaps the most invidious case is that of Napoleon Chagnon, the maverick anthropologist who lived for decades with the Yanomami, advancing theories of the ‘fierce people’ that were uncongenial to the myth of the ‘noble savage’, and to the academic establishment. Chagnon (and his colleague James Neel) were accused of using vaccines to spread measles and thus perpetrating genocide among the Yanomami. These accusations were upheld by the American Anthropological Association – at considerable cost to Chagnon and his career – until they were exposed, partly with the help of Dreger, as fraudulent. For Dreger, Chagnon – ‘pugnacious, articulate, politically incorrect’ – is the very ‘ghost of Galileo’.

In all these areas, Dreger has done good – sometimes heroic – work, becoming herself the target of the zealous guardians of vested interests who stalk the internet and the academy. However, there is a weakness in her enthusiasm for the Galilean personality, a tendency to succumb to what the late Norman Levitt dubbed ‘the Galileo myth’ – ‘the idea of the lone noble genius whose insight transcends that of his hidebound age and who consequently faces scorn and persecution for his advocacy of unconventional truth’ (2). As Levitt observes, charlatans and the self-deluded often believe that they are Galileo: ‘Rarely has any cult hesitated to answer derision by resorting to this myth in some form.’ He wisely warns that ‘while Galileo was a rebel, not all rebels – only a tiny fraction – are Galileos’.

Neither the conviction that one is a scientific pioneer, nor the experience of victimisation, is sufficient to confer the status of ‘Galilean’. Both, for example, have long been claimed by Andrew Wakefield, the promoter of the link between vaccines and autism (in a curious aside, Dreger reports that Wakefield is collaborating with Patrick Tierney, the leading voice in the discredited campaign against Chagnon, in a new anti-vaccine project). Yet, in a recent New Statesman article, Dreger endorses the work of Mark Largent, a fellow medical historian, who has come under fierce attack from childhood-vaccine advocates in the US over his attempt to forge a ‘third way’ between them and the increasingly vociferous – and influential – anti-vaccination campaigners. Implicitly adding Largent to her list of beleaguered Galileans, Dreger echoes Largent’s critique of the childhood immunisation programme and denounces the ‘frenzied’ and ‘self-righteous zealots’ who have ‘marked him out as a heretic’.

Contrary to the assertions of some of the ‘anti-anti-vaxxers’, who have a tendency towards excessive earnestness that falls somewhat short of zealotry, Largent (and Dreger) make some valid criticisms of the immunisation programme. It is true, for example, that this is influenced by political as well as scientific considerations: those who promote the slogan ‘too many, too soon’ in the US can readily point to the UK, which does not provide routine immunisation for babies against hepatitis B or chickenpox (varicella). It is also true that there is some justification for public scepticism about the relationship between the vaccine manufacturers and government agencies – as the recent scandal over the HPV vaccine in Texas confirms. The public also has good reason to be sceptical over claims that current vaccines are ‘incredibly safe’. Though neither Largent nor Dreger cite this example, the – scientifically confirmed – reports of a significant number of cases of narcolepsy resulting from one of the flu vaccines used in the 2009 swine-flu pandemic (itself excessively hyped by public-health authorities) are only the latest in a long history of adverse effects. Though there is no doubt that vaccines have become both much safer and more effective in recent years, dogmatic reassurances regarding safety are neither justified nor effective. The refusal of the British government to grant compensation in the narcolepsy cases will also not foster public confidence in the vaccine programme.

However, despite their earnest protestations of commitment to vaccination and their dutifully reported family histories of compliance, both Largent and Dreger make undue concessions to the anti-vaxxers. Largent is credulous about claims of mercury toxicity resulting from the use of thimerosal, a mercury-based antiseptic in some vaccines, while casually dismissing the risk of bacterial contamination of vaccines (which caused many deaths in the past) as an issue of storage. His claim that the ‘symptoms of mercury poisoning look so much like autism’ confirms that, as a historian, he has no clinical experience of either condition. (See my book, Defeating Autism: A Damaging Delusion.) When Largent resorts to emotive phrases like ‘bundling vaccines together’ (in combined vaccines that reduce the number of injections endured by babies) or ‘pumping mercury into infants’ (by continuing to use infinitesimally small quantities of mercury in thimerosal), it is clear that he has embraced the prejudiced outlook of the anti-vaxxers.

Though he provides a detailed account of the early stages of Wakefield’s campaign against the MMR (measles, mumps and rubella) vaccine, Largent fails to recognise that his work was discredited scientifically long before he was exposed as a fraud in the protracted General Medical Council hearings that culminated in his removal from the medical register in 2010 (see MMR and Autism: What Parents Need to Know.) Given the egregious attempts by some pro-vaccine activists to blame the TV actress and anti-vaxxer Jenny McCarthy for thousands of deaths from vaccine-preventable illnesses in the US, it is understandable that Largent and Dreger should offer her some sympathy. But in their misguided attempt to appear balanced, they underestimate the damaging effects of McCarthy’s high-profile campaign, and her endorsement of quack treatments for autism, on child health in general and on families affected by autism.

Following recent measles outbreaks in the US and subsequent attempts in several states to restrict parents’ right to claim ‘personal belief exemptions’ for their children, vaccination has become the focus of intense political controversy. While Dreger is right to counsel against the resort to ‘old-fashioned paternalism and even heavy-handed legal compulsion’, the cause of winning parental hearts and minds will not be advanced by Largent’s concessions to anti-vaccination pseudoscience. That requires that, in Dreger’s words, we promote the ‘case for modern science’ in the spirit of Galileo, seeking to find ‘the truth together through the quest for facts’.

Galileo’s Middle Finger: Heretics, Activists and the Search for Truth in Science, by Alice Dreger, is published by Penguin. (Order this book from Amazon(UK).)

Vaccine: The Debate in Modern America, by Mark A Largent, is published by John Hopkins University Press. (Order this book from Amazon(UK).)