Why British humour is lost in translation

We have our messy language to thank for our puntastic wit. 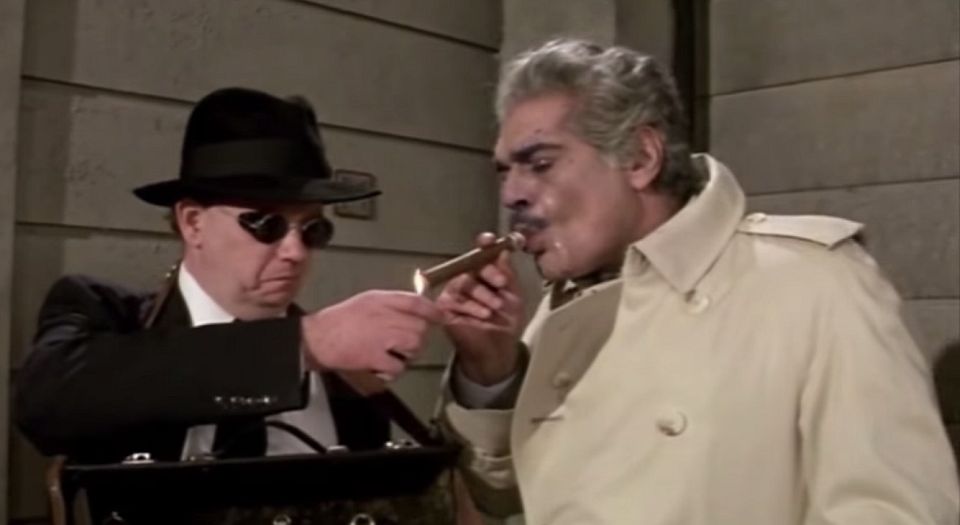 Just as Alec Guinness was known to those of us born in the 1970s as Obi-Wan Kenobi in Star Wars – more than for his roles in The Ladykillers or Kind Hearts and Coronets – the late Omar Sharif will forever be the hapless Agent Cedric from the 1984 comedy Top Secret!. Sure, our parents will reminisce about his beguiling presence in Lawrence of Arabia and Doctor Zhivago, but we remember Sharif as the man who delivered the line: ‘Wait! You dropped your phony dog poo.’

The movie also contains one of Hollywood’s best-loved puns. ‘I know a little German’, says Hillary. ‘He’s sitting over there’, he continues, pointing to a tiny man dressed in lederhosen. And so, as a homage, I decided last Friday to watch the film again.

Knowing a little German myself, it dawned on me that this joke wouldn’t work in German, which has separate words to describe a language and a person from a country (our word ‘Spaniard’ is an exception). To know the language is: ‘Ich kenne ein Bisschen Deutsch.‘ To know a short Teutonic fellow is, ‘Ich kenne einen kleinen Deutschen‘. Therefore, the German subtitles on the DVD rather prosaically read ‘Lieber kein als kleindeutsch wie der Herr dort drüben‘ – ‘Hopefully not as little German as the gentleman over there’.

The English have a reputation for being a funny people. This, I think, derives from the sloppiness of our language, the messiness of which leads to misunderstandings. Indeed, the word ‘funny’ itself has two meanings.

Consider the old joke. ‘My dog has no nose’, says one. ‘How does he smell?’, asks another. ‘Terrible!’ This works because the English verb ‘to smell’ means both to sniff and to emit an odour. This joke wouldn’t work in Italian, where there’s no room for confusion. ‘Il cane sente l’odore del cibo‘ means ‘the dog smells the food’; ‘Il cane puzza terribile‘ means ‘the dog smells terrible’.

Romance languages also use reflexive verbs much more than we do, which also removes ambiguity. In Catalan, ‘ofegar’ means to suffocate someone or something else, and ‘ofegar-se’ means for oneself to suffocate. In English, ‘to suffocate’ can mean to asphyxiate or to strangle, two very different things.

Italian has ‘sentire‘ meaning ‘to feel (something)’ and ‘sentirsi’ meaning ‘to feel’ – the latter pertaining to your internal self. To feel cold is ‘sentire freddo‘, while to feel like doing something is ‘sentirsi di fare‘. English doesn’t have that distinction. One result is the following exchange from the 1980s TV comedy The Young Ones:

Neil: ‘I’m really confused. I’m just not feeling myself today.’
Rick: ‘Hey, Mike, you could do a really good joke, couldn’t you, about feeling yourself!’

English is ripe for misunderstanding. Children are amused by the construction ‘I feel like an apple’, as they are yet to comprehend that ‘like’ is the equivalent of the preposition ‘similar to’, as well as a verb. That ‘your’ and ‘you’re’ sound the same gives us verbal jokes like the one I heard on BBC Radio 4 this week:

‘Two nuns are driving along when the devil suddenly appears on their car bonnet, surrounded by fire and brimstone. One nun says to the other: “Quick, show him your cross.” The other leans out the window and shouts, “Get off my fucking bonnet!”.’

Then there’s the dual role of the apostrophe. In speech, ‘Gerrards Cross’ can either be a village in Buckinghamshire, a cross that belongs to Gerrard, or the state of mind of a Liverpool footballer who hasn’t been picked for the England team.

The French, who have a systematic mindset, and whose humour instead centres on mime and farce, always complain how disorganised in thought are les Anglo-Saxons. Although the argument that your language shapes your reality is overstated, there is something to be said for our messy language being the source of our humour.

Mind you, all languages have puns. I’ve watched another Zucker, Abrahams and Zucker masterpiece, Airplane!, with German subtitles. ‘Surely you can’t be serious? – I am serious. And don’t call me Shirley’, becomes ‘Surely you’re not being earnest [‘Ernst‘]? – I am. And stop calling me Ernst.’

Two arguments frequently made by those opposed to foxhunting with hounds is that it brutalises people, and that killing for pleasure is ‘barbaric’.

Although psychopathic murderers do often start out torturing and killing animals in their teens, this is because they lack empathy in the first place. People only become brutalised by witnessing or participating in violence towards other human beings.

Secondly, nine out of 10 people in Britain eat meat for pleasure. There’s no need to have animals slaughtered to fill your belly. I will take sermons from vegetarians about the ‘barbarity’ of foxhunting, but not from anyone who treats themselves to a McDonald’s or enjoys a Saturday-night doner kebab.

Foxhunting is not akin to bear-baiting or bullfighting – pastimes centred on wanton cruelty. Foxes are vermin that need to be culled to protect the poultry and lamb that is meant for your plate. And if people enjoy themselves while doing it, what difference does it make to the fox?

I recently read an article on the Local, an English-language news site about France, about words in French that don’t have equivalents in our language. Among them are ‘empêchement‘, to mean a disruptive and unforeseen chain of events, which a Briton would express by saying ‘sorry, something came about’; ‘dépaysement‘ (literally ‘de-country-fying’), meaning to feel strange and out of place; and ‘frileux‘ – someone who’s excessively sensitive to the cold. Catalan has its own equivalent to the latter, which sounds much more amusing to English ears – ‘fredolic‘ (‘fred‘ being cognate with ‘froid‘).

I’m not sure English needs its own equivalents to the above. Why not just import them, as we did with déjà-vu and Schadenfreude?

But there is the need to invent a word that encapsulates one particular sensation. It’s that feeling you get when a stranger on the pavement is walking at the same pace as you, which provokes a strange and unique mixture of irritation and embarrassment. Within seconds, I guarantee one of you will deliberately speed up, slow down or cross the road.

I asked social media for suggested neologisms. Replies have included ‘psychophrenia’, ‘gleichschritttempoangst’ or simply ‘Englishness’. My favourite so far is ‘doppelgangism’, a nice pun on Doppelgänger, which literally means ‘double walker’. But we’ve borrowed that German word already. Maybe we could anglicise it to ‘doublegang’. A tweet might read: ‘Walking to the shop and being doubleganged #awkward.’ If you can improve on this, do tweet me: @patrickxwest

Patrick West is a spiked columnist.