Why Greeks should embrace a Euro exit

Fear of the future is no reason to stay in the EU. 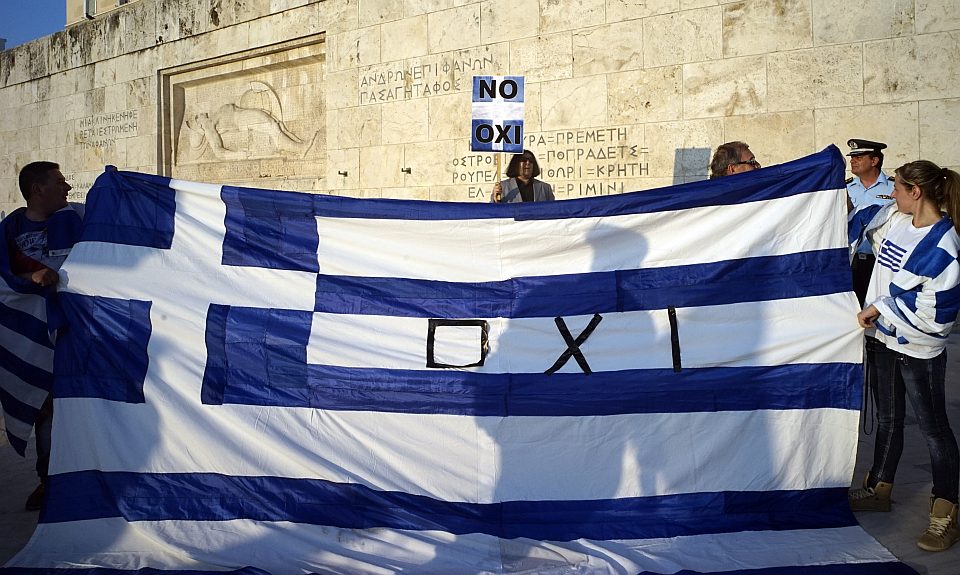 Fear on all sides has characterised the Greek crisis from 2008 onwards. You can see it in the economically brutal but coercive actions of Europe’s political elites, desperate as they are to preserve the EU project. And you can see it, too, in the succession of Greek leaders, from George Papandreou to Alexis Tsipras, anxious to maintain Greece’s membership of the Eurozone, albeit at a reduced cost. It is as if the alternative future, the one in which Greece becomes a sovereign nation again, is just too frightening to countenance. Fear has become a material force – a fear of the future, a fear of what the unravelling of the Eurozone could bring. And so it drives the Greek crisis on, through last-ditch-ridden talks, through an interminable series of tit-for-tat press conferences, and now, it seems, through missed repayment deadlines, and a referendum in Greece on whether to accept the most recently proposed set of bailout conditions.

That Europe’s leaders, fronted by the European Central Bank, the European Commission and the International Monetary Fund (otherwise known as the Troika), are fearful of the implications of a Greek exit from the Eurozone ought to go without saying. European national elites cling to the EU project as a drowning man might to flotsam. They need the Byzantine structures of the EU to flee from accountability, and to escape their own domestic problems, their crises of legitimacy, of authority, of purpose. If Greece is allowed either to exit the Eurozone, or to remain within it having dodged its debts, then the EU project is jeopardised. The populist anti-EU storms brewing elsewhere, be it in Spain with the leftish Podemos or in France with the right-wing Front National, could break; and the EU-weary squalls forming in the UK or Italy could become forces to reckon with, too. So the EU elite is doing everything it can to keep Greece in the Euro-fold, using monetary force to bludgeon Greek democracy in the ‘right’ direction. As Jean-Claude Juncker said of the Greek government’s refusal so far to accept the current bailout conditions, ‘You shouldn’t commit suicide because you are afraid of death’.

But the fear of a Euro-less future is no less palpable on the side of the Greek, Syriza-led coalition government. Yes, there are some leftist elements in the coalition, and indeed left-wing factions in Syriza itself, who would be all too happy to get out of the Eurozone and the EU. But the leading players, Tsipras and finance minister Yanis Varoufakis, are not of their number. At no stage have they wanted to leave the Eurozone. They have never taken seriously the possibilities that could arise from Greece going it alone, from a greater degree of sovereignty and political responsibility to the chance to reckon with the structural problems afflicting the Greek economy. Instead they have looked the other way, put their best poker faces on, and attempted to bargain their creditors to death. Even this Sunday’s referendum seems to be an attempt to return to the EU negotiating table with either a two-fingered mandate for a lot less austerity (which is what Tsipras wants) or a thumbs-up mandate for a little bit less austerity. Despite appearances, it is not, at least as far as Syriza is concerned, a referendum on Eurozone membership.

And then, of course, there are the spectators in this Greek tragedy, the Greek people themselves, who at every stage have been forced passively to look on as their future is decided far away in Brussels, behind firmly closed doors. Understandably, they, too, fear a Greek exit from the Eurozone. Things are bad now, runs the refrain, but they could get a lot worse. Yes, Greece’s youthful anarchists, and its cadre of nostalgic young communists, would be happy to see Greece abandon the EU. With unemployment among Greek youth running at 60 per cent, they have little to lose. But, if recent polls are to be believed, the majority of Greeks do fear losing what little they still have. Given a choice between the miserable certainty of continued Eurozone membership and the terrifying uncertainty of a Greek exit, over half would rather the certainty. As one middle-aged Athenian told BBC’s Newsnight, staying within the EU will at least ‘keep things slowly moving’. There might be no leap out of the recession, but there’ll be no lurch into the abyss either.

But as difficult and painful as it is, this fear of a future free of the Eurozone and, ultimately the EU, needs to be overcome. The problems that confront Greece, as in reality they do other EU nations, are not going to go away if the EU status quo is maintained; they’ll be just be mystified, refracted and distorted through the layers of EU bureaucracy and timetabled debt-repayment plans. So Greece’s economic problems, its historically weak levels of productivity, and therefore its limited ability to create wealth (hence the massive borrowing), appear as problems of debts and deficit, a problem of banks and credit cards. Likewise Greece’s political problems, in which leaders struggle for legitimacy and purpose, appear as problems of EU rules and regulations, of EU-led bullying led, no doubt, by German chancellor Angela Merkel.

That’s why a Greek exit, as painful and filled with trepidation as it would be, is potentially a progressive move. Because the source of the current fear is not just a fear of the future; it’s a fear of taking responsibility for that future, a fear of exercising political agency and having to live with the consequences. But without the comfort blanket of the Eurozone and the EU, Greece’s problems, both political and economic, will finally have to be confronted. The mystifications, the displacements, will recede, and an honest rapprochement with reality can begin. It will mean that politicians and people alike will finally have to start to take responsibility, not just for the present mess, but, more positively, for the future of the nation, too. Ultimately, it would be a lesson in sovereignty, in grown-up politics, from which all Europeans could rightly draw inspiration.