Should the Confederate flag come with a trigger warning?

Destroying symbols won’t change the past. 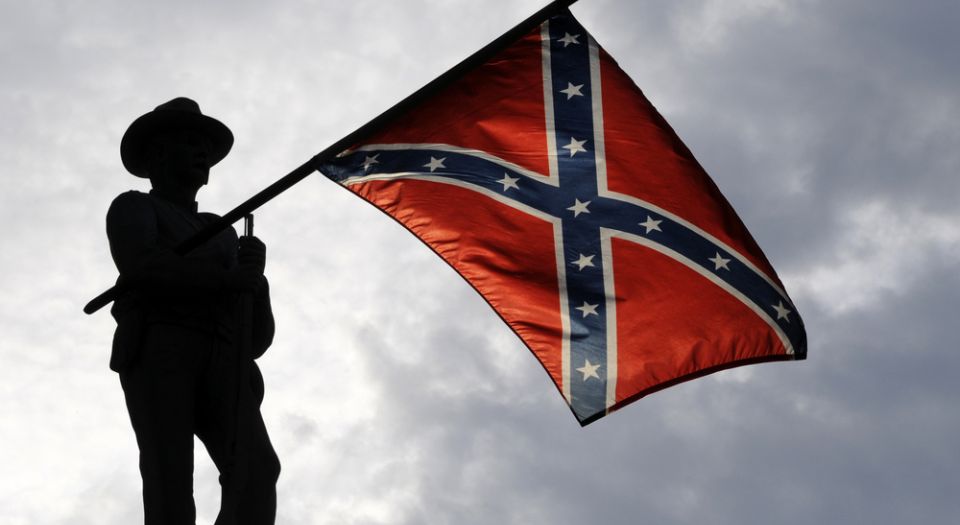 Now that Walmart, eBay and Amazon, three of the world’s largest retailers, have said they will stop selling merchandise bearing the Confederate flag, can we finally accept that those ostentatious displays of ‘free speech’ solidarity after the Charlie Hebdo killings were an utter fraud?

The clamour to denounce the flag, following the church massacre in South Carolina, is grimly ironic. While we in the mature, secular West are easily prone to stereotype Muslims as volatile, sensitive souls who are likely to get murderously enraged at any representation of the Prophet Muhammad, we now seem to subscribe to the notion that the mere sight of a flag has the capacity to transform the average American into a fanatical, gun-toting killer.

‘Je Suis Charlie’ was but a mere passing fad. The proper motto of our age is ‘I believe in freedom of expression, but…’. We live in hyper-cautious times, in which all are deemed imperilled by images that might make us lose our rational faculties. To use that mealy-mouthed word, it could rightly be deemed ‘inappropriate’ to have the Confederate flag on a state building. But on toy cars? This all-too-familiar, hollow grandstanding demeans us all.

The herd-like rush to demonise the Dixie flag embodies the cretinisation of human civilisation on another level: our inability or unwillingness to understand context. If you see the Confederate flag held aloft by a heavily armed man in Alabama, making Nazi salutes and chanting ‘white power’, you appreciate what it means to him. If you see the same flag in an American Civil War reenactment battle, or in an episode of The Dukes of Hazzard, it has different connotations. Yet the consumer division of Warner Bros has said it will stop licensing toy cars and models featuring that General Lee with the controversial flag on its roof.

The same rule goes for our own Union flag, which means different things depending on whether it’s seen outside Buckingham Palace, fluttering on the streets of east Belfast, on the front cover of a mod revival album, or on someone’s underpants. The Confederate flag may represent racism and slavery to some, but if we’re going to apply the same rule, then the Stars and Stripes has a lot more blood on its hands. And so does the Union flag.

Notions of nuance and context find it hard to exist in a babyish, literal-minded and censorious culture, in which people’s thirst to seek offence will never be satiated. A blanket ban on the Confederate flag is like outlawing boxing because you can’t punch people in the face on the street.

Perhaps the Confederate flag should come with its own ‘trigger warning’. Or would that, too, be offensive?

To the man who brought us Nordic noir

I was sad to read about the death of Britain’s most distinguished Swedish-language translator, Laurie Thompson, at the age of 77. We can thank this Yorkshireman for introducing the Wallander novels to the British public, from the 1990s onwards. This, in turn, spawned the cult of ‘Nordic noir’ in the UK. And while the gloomy and mysterious genre has never been to my liking, it has aroused an interest in Swedish and Germanic languages in general.

I’ve been learning German sporadically for three years, and, like most outsiders, I still struggle with its grammatical complexities. While its basic vocabulary remains very similar to our own – ‘the brown shoes’ is ‘die braune Schuhe‘ – its syntax is a minefield. It has three genders, second verbs come at the end of sentences, and there are six spellings of the word ‘the’.

Its near cousin, Swedish, on the other hand, is known to be comparatively straightforward. You don’t have to change any of the verbs, for instance. There is no ‘I am, you are, he/she is’; only ‘Jag är, du är, han/hon är‘. So concise is the language that translations of Swedish novels into English are usually a third longer than the original versions.

Once, Thompson’s obituary in The Times observed, to explain the difference between the grammar of German and Swedish, he asked a German student what ‘German grammar shelves’ looked like in a library. Entire shelves were given over to German books, she replied. Thompson then held up a single slim volume, saying: ‘For Swedish, all the grammar you need is here.’

A rebrand won’t change the past

A village in Spain this week voted to change its name, owing to the fact that Castrillo Matajudíos, as it has been called since the Middle Ages, means ‘Fort Kill Jews’. It will now revert to its previous name, Castrillo Mota de Judios, meaning ‘Jews Hill Fort’. A whopping 50 people voted in favour of the measure.

I doubt that the move was made in response to a terrifying swathe of anti-Semitic barbarism sweeping the peninsula, or to attract more Jewish tourism. I can’t imagine that any genuine neo-Nazi has made a pilgrimage to the place after Googling its name. The village flag already has a Star of David on it.