No, Cameron, you can never have ‘too much’ tolerance

The PM, like so many others, doesn't get how important tolerance is. 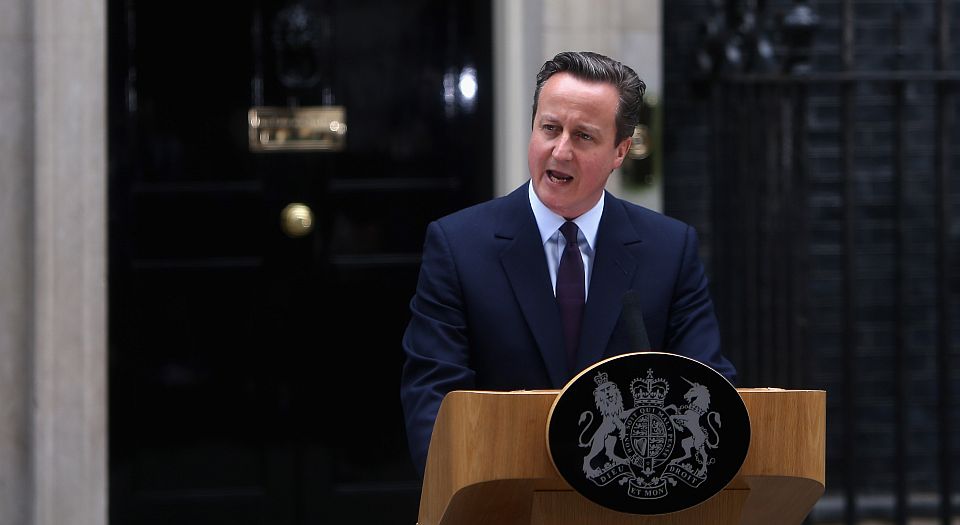 That British society faces a crisis of identity is now beyond doubt. The very fact that the UK government constantly calls for the promotion of British values is as an indirect acknowledgement of the absence of those values. The confusion is particularly prevalent in schools and higher-education institutions, which are now charged with the task of weaving British values into the curriculum. Educators who have been told that they will be inspected and appraised on how effectively they carry out this duty are often unable to explain what British values are. In areas of England where radical Islamists have succeeded in influencing some schools’ ethos, educators are particularly unenthusiastic about flying the flag for Britain. According to a recent report, only 58.7 per cent of school leaders in the West Midlands believe it is appropriate for schools to promote British values.

The difficulty of giving meaning to ‘British values’ has been compounded by the opportunistic manner in which successive governments have dealt with this issue. The values question has gained prominence only because of the perceived need to counter the influence of Islamic extremism. Instead of reflecting on the traditions and principles of a democratic society, things that could bind people of different backgrounds together, the government has only one priority: isolating and challenging the appeal of Islamic extremists. Regrettably, this narrow anti-extremist focus has led the government to negate principles that were traditionally at the centre of the British liberal-democratic tradition. One such principle is that of tolerance.

The ideal of tolerance

If there is one genuine and powerful value associated with the British liberal-democratic tradition, it is tolerance. It was the seventeenth-century English philosopher John Locke who first put forward a clear argument for the liberal ideal of tolerance. Locke’s call for tolerance sought to protect religious belief from state coercion. Over the centuries, this affirmation of religious tolerance has expanded to allow the free expression of opinions, beliefs and behaviour associated with individual conscience. Tolerance is intimately connected to the assertion of the most basic dimension of freedom: the freedom of belief and of conscience. In the nineteenth century, John Stuart Mill helped develop this idea of tolerance. Mill understood that freedom of conscience meant very little unless people had the freedom to communicate their beliefs. Under his influence, the meaning of tolerance came to encompass not only the freedom of conscience and belief, but also freedom of speech. In its developed form, the ideal of tolerance demands that we not only accept the right of people to live according to their beliefs and opinions, which are sometimes antithetical to our own, but that we also accept the right of people to express views that we may find loathsome.

Tolerance upholds the concepts of freedom of conscience and individual autonomy. What’s more, it calls for the absence of constraint on behaviour linked to the exercise of individual autonomy, so long as an act does not violate another person’s moral autonomy or harm others. From this perspective, tolerance can be measured in relation to the extent to which people’s beliefs and behaviour are not subject to institutional and political interference and restraint.

For Mill, it was far better to allow people to express erroneous opinions, and even lies, than it was to suppress them. He argued that it is through having to struggle with erroneous opinions and lies that real clarity is gained, as individuals manage to work out for themselves what is right and what is wrong.

Tolerance is indispensable because it creates the conditions for the free expression of our opinions, beliefs and behaviours associated with conscience. But tolerance is also a moral virtue because it allows society openly to engage with moral uncertainty. Instead of closing down discussion in a desperate search for certainty, tolerance openly embraces uncertainty, regarding it as an opportunity to develop our knowledge and gain greater moral and intellectual clarity.

Interference with individual beliefs and opinions disrupts the intellectual and moral development of society. From this standpoint, tolerating views we hate is a very small price to pay for society’s intellectual and moral development. Tolerance is a virtue because it takes people very seriously. It recognises that, without allowing people the freedom to err, society will find it difficult to find its way to the truth.

The corruption of tolerance

In theory, the entire political class affirms the value of tolerance. But, in practice, the political class quickly becomes an unabashed apologist for intolerance when it suits its needs. In one of his first speeches after his re-election as prime minister, David Cameron claimed that, for too long, Britain has been a ‘passively tolerant society, saying to our citizens, “as long as you obey the law, we will leave you alone”’. Cameron claimed that passive tolerance ‘meant that we have stood neutral between different values’. This was not the first time that Cameron derided tolerance as a passive act of appeasement. In February 2011, in a speech on Islamic extremism and terrorism, he argued that ‘we need a lot less of the passive tolerance of recent years and much more active, muscular liberalism’.

Cameron’s coupling of passivity with tolerance shows he lacks a basic grasp of the meaning of tolerance. Genuine tolerance is never passive. The very act of toleration requires a preparedness to live, and engage, with the challenges posed by contrasting and even hostile beliefs and views. Tolerance requires courage, conviction and a commitment to freedom – key characteristics of a confident and active public ethos.

One possible reason why Cameron feels he can associate tolerance with passivity is because, in recent decades, tolerance has been redefined as a polite gesture of non-judgementalism. In official documents and school texts, tolerance is presented as a polite character trait, rather than as a way of responding to beliefs and views with which one disagrees. Indeed, school texts on tolerance frequently treat it as synonymous with non-judgementalism. Non-judgementalism is indeed a passive act, as it involves a refusal to criticise and engage with conflicting views. But non-judgementalism is alien to the principle of tolerance. Being tolerant involves the act of judgement because we can only be tolerant towards beliefs and views with which we disagree. According to the classical-liberal outlook, tolerance involves an act of judgement and discrimination. Nevertheless, this act of judgement should not serve as a prelude to censoring another person’s wrong opinion, because tolerance demands respect for people’s right to hold beliefs in accordance with their consciences.

It is difficult to be tolerant

Contrary to the view that tolerance is a soft option, it is not easy to be tolerant. It requires a willingness to tolerate views that one finds offensive and a preparedness to accept that no idea or view can be beyond question. The capacity to tolerate requires that society takes freedom seriously. Tolerating beliefs and views hostile to our own requires a degree of confidence in our own convictions, and a willingness to take risks.

Unfortunately, the contemporary world has become risk-averse and finds it difficult to deal with views that run contrary to that of a democratic, open society. Despite officialdom’s call to promote British values, most institutions appear reluctant to confront the arguments of radical Islamists with intellectual conviction and moral force. Instead, they evade this challenge by resorting to bans and bureaucratic solutions. This evasive sentiment is frequently expressed through the phrase that we should not be ‘tolerant of the intolerant’. Writing in this vein, one supporter of Cameron’s approach to tolerance recently argued against ‘the misguided and dangerous belief that freedom of speech is sacrosanct’. The corollary of this approach is that, far from being sacrosanct, freedom of speech and tolerance have only a tactical or pragmatic significance. In effect, this means that some of the foundational principles of the British liberal-democratic tradition – free speech and tolerance – are often seen as little more than an administrative convenience by the ‘let’s not be tolerant of the intolerant’ lobby. No wonder the government struggles to give meaning to British values.

Those who argue that tolerance has gone too far don’t really understand or appreciate tolerance. What’s more, in claiming tolerance is passive, they only reflect their own inclination towards intolerance. The claim that society is ‘too tolerant’ assumes that tolerance should be rationed and made available only to those who share our moral universe. The idea that there can be ‘too much’ tolerance turns tolerance into a kind of indulgence that society can well do without. This is best captured by that very unattractive term ‘zero tolerance’. When a politician demands zero tolerance, what they are saying is that the slightest concession to being open-minded about a particular issue is a marker of moral cowardice.

One reason why Western societies have lost sight of the meaning of tolerance is because of their ambivalence towards the exercise of moral judgement. There is a very real problem with the way that tolerance is perceived in Europe today. Tolerance is frequently seen as a form of polite indifference. For example, official multiculturalism, as promoted by the EU and its member states, continually promotes the idea of ‘acceptance’ and ‘difference’ and discourages the questioning of others’ beliefs and lifestyles. Its dominant value is the principle of non-judgementalism. Yet, judgement and criticism are fundamental to an open-minded democratic society. Multiculturalism has nothing to do with true tolerance. Multiculturalism demands not tolerance, but indulgent indifference. That’s why it is crucially important to rescue the concept of tolerance from its confused association with official multiculturalism.

In contemporary public discussion, the connection between tolerance and judgement is in danger of being lost. In its everyday usage, the term tolerance is used interchangeably with the phrase ‘non-judgemental’. While the reluctance to judge other people’s behaviour can be attractive, it is not necessarily a manifestation of social tolerance. All too often, this attitude is synonymous with not caring about the fate of others. Yet, the precondition for a functioning democratic public sphere is openness to conversation and debate. Reflecting on our differences, letting each other know where we stand and what we find disagreeable in each other’s opinions, is the very stuff of a vibrant democracy. Without it, tolerance turns into shallow indifference, an excuse for switching off when others talk. If British society struggles to give meaning to its national culture, it is not because it has become too tolerant, but because of a reluctance to encourage the capacity to judge and make clear moral distinctions between what is right and what is wrong.

The real challenge facing British society today is our inability to engage in a battle of ideas. The reluctance to judge runs parallel with the illiberal inclination to censor speech. Setting limits on tolerance has the perverse effect of allowing the enemies of freedom to set the terms of public debate. The call to be intolerant of intolerance establishes a moral equivalence between the two sides of the argument. Worse still, by abandoning the battle of ideas, the government inadvertently signals its own lack of faith in its ability to win the hearts and minds of its own citizens.

Frank Furedi is the author of On Tolerance: A Defence of Moral Independence, published by Continuum. (Order this book from Amazon(UK).)