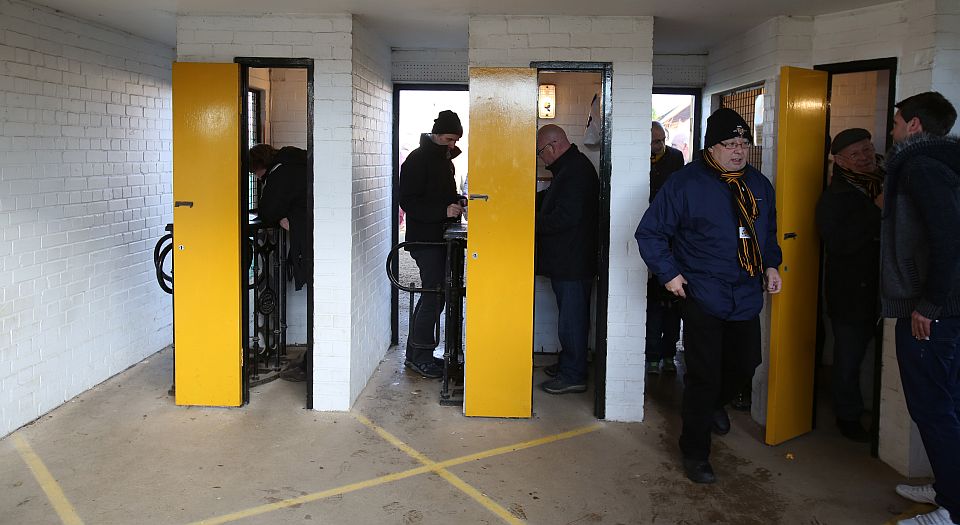 This week, Cambridge United became the first English football club to breathalyse fans at the turnstiles. Sounds like a spoof news story from the Daily Mash, doesn’t it? But this most certainly isn’t a joke. Chilling as it sounds, pre-match breath tests have been introduced as part of a drive to reduce alcohol-related disorder in the city. Customers at McDonald’s and other venues in Cambridge will also face breath tests. At what point do we give up the pretence that Britain was on the side of freedom in the Cold War and admit that the repressive Stalinist regimes of Eastern Europe were correct all along? Modern Britain isn’t just sleepwalking into a police state, it’s practically riding on an open-top bus, celebrating the loss of hard-won liberties.

For many football fans, the whole point of going to the game is to meet up with your mates, sink a few pints, sing rude songs and trade insults with the opposition. In theory, the football match itself ought to provide some entertainment, too. But we don’t all support Barcelona, so relying on our teams to keep us on the edge of our seats is a hit-and-miss strategy. That’s why we’ve learnt to entertain ourselves. And this is where alcohol comes in. Thousands of inebriated punters are an essential ingredient of a good, raucous atmosphere inside a football ground. Without alcohol, the roar of the crowd would be significantly diminished. Without alcohol, the matchday experience wouldn’t be quite the same for fans. You only have to visit a Premier League stadium to see the positive impact of alcohol on atmosphere. It’s usually the away fans, who’ve been boozing on the coach or train on the way to the game, who are making all the noise. Booze, of course, isn’t the only factor, but it plays a big part.

Given that a sizeable proportion of Cambridge fans will have been drinking before kick-off, aren’t breath tests a recipe for an empty stadium? Cambridgeshire police say that passing a breath test will not be a prerequisite for entry to the ground. The tests would merely be ‘a tool to support security staff who often become the victims of drunk, aggressive behaviour’. Sergeant Ian Wood of Cambridgeshire police said, ‘We accept that a responsible fan may consume a moderate amount of alcohol before a game. However, we are focusing on the overly intoxicated people who are most likely to become problematic during or after the game.’ How exactly would Cambridge police define ‘overly intoxicated’? According to Wood, the breathalyser kits provided to matchday stewards ‘will detect anything above twice the legal drink-drive limit’. In other words, anyone who has drunk over four pints of beer – which to me doesn’t sound particularly excessive – is likely to fail the breath test.

What’s disturbing about this scheme is that it will penalise fans, not for committing acts of violence or disorder, but because they might commit such acts in future. The phrase that springs to mind here is ‘precrime’. It’s a term coined by sci-fi author Philip K Dick in The Minority Report, which was adapted into a film by Steven Spielberg. The story paints a dystopian vision of Washington DC in the year 2055, in which a dedicated police ‘precrime’ division uses intelligence from ‘precogs’ – mutants who can foresee future crimes – to arrest people before they have committed the offence. Admittedly, Cambridge stewards don’t have the telepathic powers of Samantha Morton, vegetating in a bath of blue goo, to envision future crowd trouble. Breathalyser kits certainly aren’t the stuff of science fiction. But their use at Cambridge is pure ‘precrime’. The introduction of breath tests is an attempt to punish football supporters for crimes they might commit as a result of intoxication.

Given the draconian nature of the scheme you’d imagine that the Abbey Stadium was a hotbed of alcohol-fuelled trouble. A quick glance at the Home Office arrest figures for last season gives the lie to this. The use of breath-testing kits at Cambridge is a gargantuan overreaction to a virtually non-existent problem. In the whole of the 2013-14 season, there were just 16 arrests of Cambridge supporters, of which only eight were at home games. And get this, just three Cambridge fans were nicked for alcohol-related offences. Yes, that’s right – just three arrests for drunkenness. The term ‘disproportionate’ doesn’t even come close to doing justice to this illiberal measure. If anything, Cambridge fans deserve an award for good behaviour, rather than a policing regime that wouldn’t have looked out of place in the former GDR.

While the use of breathalysers at a football stadium is a novel development, criminalising fans for offences they might commit in the future is, sadly, all too familiar. The police often impose draconian ‘bubble match’ restrictions on travelling fans, supposedly to prevent disorder in incendiary fixtures. The police also serve individual fans with Section 27 orders, under the provisions of the Violent Crime Reduction Act 2006, to remove them from a specified area in order to prevent ‘alcohol-related disorder’. In fact, the legal framework governing the conduct of football spectators already serves to criminalise activities such as drinking alcohol ‘in view of the pitch’, ‘going on to the playing area’ or entering a football ground ‘under the influence of alcohol’. These are not inherently violent or anti-social acts, but acts that ‘might’ lead to violence or disorder.

Football has long been a laboratory for testing out new precrime-style policing methods. The fact that these restrictions raise barely a murmur of dissent from civil-liberties groups is a scandal. But it’s time for all of us to wake up and smell the Bovril. It ought to be a hallowed judicial principle in a free society that we punish people only for crimes they have actually committed, not for crimes that they might commit in the future. And that means sweeping away all of the precrime restrictions on football fans, including the use of breath tests. Or, to put it in football parlance, you can stick your breathalyser kits up your arse.