Milibrand: the myth of ‘the alternative’

What passes for radical politics today is as downbeat as the mainstream. 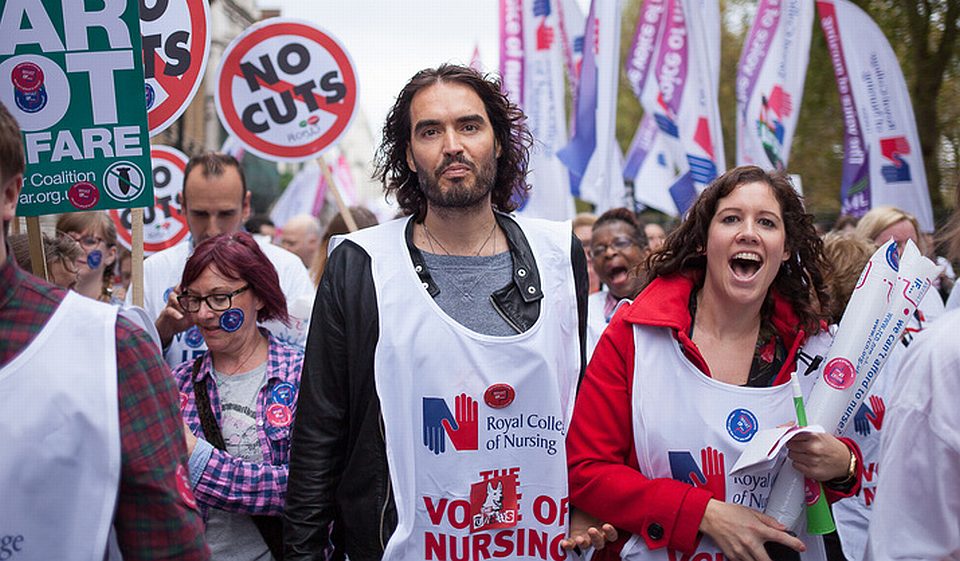 As the General Election yawns into its final week, you’ve got to feel for the political reporters. With so little real politics to discuss, and with only so many memes you can make, it must be like watching paint dry, and then having to blog about it. You can almost forgive them for completely losing their shit this week when word got out that Labour Party leader Ed Miliband had agreed to be interviewed by part-time comedian Russell Brand on his vlog, The Trews. After photos of Miliband leaving Brand’s east London home leaked on Monday night, Brand posted a trailer of the interview on Tuesday. #Milibrand sent the Twittersphere into a fit of pique unseen since Zayn left One Direction.

And it wasn’t just the reporters who were caught up in the stardust of it all. MPs had a field day, too. Tory candidate Andrew Percy called the move ‘desperate and pathetic’. Prime minister David Cameron, still firmly in his new ‘pumped-up’ passion setting, decided to bring the burn: ‘Russell Brand’s a joke. Ed Miliband, to hang out with Russell Brand, he’s a joke.’ And before anyone could say ‘ooooh’, Miliband threw it right back at him, accusing Cameron of being out of touch with the disaffected voters Brand represents. Even Ed Balls, whom Brand once dubbed a ‘clicky-wristed snidey cunt’, felt moved to commend his leader for going out of his studio-lit comfort zone and taking Labour’s message to the people.

Miliband going to touch Brand’s hem was a cloying move. The idea that, just because people like his videos, Brand is some kind of prole medium who can put the aloof Miliband in touch with ‘the people’ is ridiculous. But it’s a testament to how bizarrely influential Brand has become that other politicians felt that they, too, had to take time out from pounding the pavement and posing with hard hats on to opine on the Milibrand interview. Since his infamous Newsnight appearance in 2013, in which Brand frothed that voting was ‘an act of complicity’ in the neoliberal Westminster consensus, he’s never been far from political discussion. His sixth-former manifesto, Revolution, was pored over in broadsheet newspapers. He’s held up, albeit hesitantly, by the left as an authentic, if slightly dim, voice of the austerity-smarting classes and damned by the right for stirring up a loony-left revolution.

Brand’s newfound influence on the political class has been fuelled by weary left-wingers who have come, like Miliband, to see him as a conduit to the little people they can no longer connect with. While, at first, they greeted this beardy, Thesaurus-hugging sleb’s foray into politics with a healthy dollop of cynicism, he’s since been cautiously embraced. While waiting to speak at a debate in Brighton a few weeks back, I got talking to a sixtysomething SWP activist who was holding a meeting in the adjoining room. The subject, he told me, was Brand’s new Michael Winterbottom-directed documentary, The Emperor’s New Clothes, which he and his comrades had all gone to see the previous night. ‘What he wants is a better world’, he said. ‘In my day we called that socialism.’

Brand may be a pillock, but at least he’s the right kind of pillock, seems to be the sentiment. And this is shared across the doggedly Labour-leaning media sphere. They may not agree with everything he says – his Hare Krishna-esque spiritualism or his sideline in 9/11 conspiracy theory, for example – but he remains, in their eyes, a vehicle for a new leftish fervour among his followers that, if properly channelled, could jolt the Labour movement back on track and form a proper alternative to Tory austerity.

Well, if that’s the plan, chaps, then it seems to be going well. The full interview, which Brand posted on Wednesday afternoon, sees him and Miliband getting along like the best of pals. Brand nods and smiles as Miliband does his best to convince the vote-shy comedian that he’s a politician the people can trust to stand up to government’s shadowy financiers. Brand stopped just about shy of endorsing him, but it was, by all accounts, a lovely chat.

But, for all the hashtag hype, this was neither the start of a new, rejuvenated Labour Party nor the Russellution betrayed. Instead, this amicable meeting of minds reflected just how inherently establishment the views embodied by Brand and his commentariat converts really are.

Whether it’s the evils of bankers, the nefarious influence of Rupert Murdoch or the incontestable holiness of the NHS, they were both singing from the same tea-stained hymn sheet. But what’s often ignored is that many of the views held by Brand and his ‘radical’ acolytes are shared across the party-political spectrum. Sure, Brand and his mates in am-dram-cum-protest group UK Uncut may fulminate about tax avoiders, but so does everyone. Even the dreaded Tories have cracked down on this ‘morally repugnant’ practice, giving the treasury new powers in 2013 to criminalise ‘abusive’ (that is, entirely legal) tax arrangements. And yes, Brand’s pretty serious about the environment (the Greens’ Natalie Bennett and Caroline Lucas are appearing on The Trews later this week), but so are all the main party leaders. In February, Miliband, Cameron and Clegg signed a pledge to phase out coal-burning power stations, no matter who wins the election. Brand may quibble that parliamentarians, controlled by their corporate pimps, will never pull these things off, but it’s hard to ignore how much his views chime with the mainstream.

Of course, Brand is a bit more out-there. He may chirrup about the mass redistribution of wealth and argue that direct democracy is the solution to parliament’s grinding stasis. But, even at their most extreme, Brand and his left-wing groupies bear the same political fatalism that lurks in the heart of Westminster. Where once radicals wanted to exploit nature for all its worth, ramping up production so that we might all live longer, plusher lives, now they only want to rein it in in the name of saving the planet and tempering our mindless, soul-sapping pursuit of wealth. We live in an age of limits. And just as today’s politicians can only every quibble over tax brackets and spending cuts, rather than work to rejuvenate the economy, today’s supposedly broader-minded radicals weigh the benefits of human progress against its ‘inevitable’ environmental and psychological costs. This is just a socially acceptable form of austerity; scarcity imposed, not by government, but by nature and our own human frailty.

For all Brand’s talk about direct democracy, his view of humanity is as downbeat as they come. Not only are we brainwashed by Murdoch, consumer culture and neoliberal dogma, not only are we in desperate need of his ‘revolution of the mind’ in order to zap us out of our corporate slavery, but we’re ultimately incapable of producing a more prosperous world without making either Mother Earth or ourselves ill.

In this General Election there’s been constant talk on the left about the need for a ‘new politics’: a bottom-up alternative to the grinding status quo. Clearly, Russell isn’t it. But not because he’s a comedian, or too idealistic, or a bit dim, but because he’s the embodiment of the anti-human, downbeat and fatalistic politics that passes for radical today. And as the dregs of the conspiratorial banker-bashers, eco-miserabilists and anti-globalisation fun sponges grope Brand, hoping to get a whiff of the public support they never managed to achieve, you see that it’s not just Miliband who’s ‘desperate and pathetic’.

Tom Slater is assistant editor of spiked and coordinator of spiked’s Down With Campus Censorship! campaign. He is speaking at the DWCC event ‘From LSE Rugby to Occupy UAL: the threats to free speech on campus’ at LSE this evening. Find out more here.