A new film explores the hollowing out of family life. 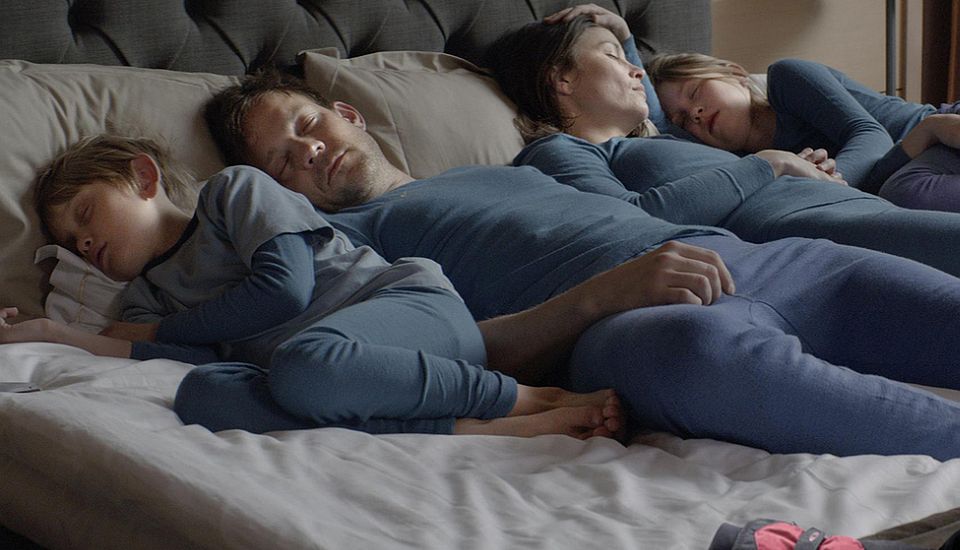 Force Majeure is one of those films you really should watch before reading any reviews, so I’ll forgive you if you stop reading now. You may have seen the intriguing poster for the film, which presents the startling image of skiers at a resort watching and taking photographs of an enormous avalanche. It looks, at first blush, like an arthouse action film. The trailer is similarly enigmatic, with Kubrick-esque blasts of strings over apparently disparate images of a ski resort.

In fact, the premise of the film is extremely simple. A picture-perfect Swedish family are holidaying together, the father, Tomas (Johannes Bah Kuhnke), having escaped from the pressures of work in order to spend time with his loved ones. On the second day, an avalanche appears to be headed for the building where the family is eating lunch. Tomas runs away from the table – abandoning his family, but taking his iPhone. As the diners return to their seats, realising that what had struck the restaurant was merely the traces of a controlled avalanche further up the mountain, Tomas returns to find his family emerging from under the table. He laughs it off, and nothing more is said about the matter.

Tomas’s cowardly retreat from the table is the motor for the drama that follows. As the film progresses, his failure to protect his family, or to entertain the possibility of self-sacrifice, leads to the near destruction of his family life. His children seem to understand their father’s betrayal and become withdrawn and irritable. He refuses to acknowledge his failure, and when the story becomes a dinner-party anecdote for fellow skiers, Tomas vehemently denies his wife Ebba’s (Lisa Loven Kongsli) version of events, until she produces a video of the event on her phone. Still, the proof of the incident hardly matters. Tomas’s continued self-deception has exposed him as a moral failure.

Several reviews of the film argue that it addresses the crisis of masculinity. Superficially, it is right to say the film portrays men struggling to identify with their traditional masculine roles. But this view ignores the fact that the women, too, are disengaged from the meaningfulness of family life. In one scene, Ebba discusses her marriage with another woman at the resort. Ebba’s new friend is in an open marriage and has left her husband and family at home to go skiing with a new boyfriend. Ebba finds her new friend’s arrangement baffling. ‘How can rolling around with just anyone mean anything?’, she asks. Her friend responds by asking: ‘How can I possibly get all my self-esteem from just one man?’

On the one hand, Ebba is struggling to find meaning in the intimacy of family life, which has come up short thanks to Tomas’s cowardice. At the same time, she is annoyed by her friend’s ‘rolling around’ and the elevation of her self-esteem as the primary concern of her life. Ebba’s disillusionment with the traditional life of the family is matched by her confusion at her friend’s supposedly liberal, self-valourising relationship, which leaves her free to sleep with whoever she wants.

The film is a discussion not merely of masculinity, but of the crisis of traditional family life. Tomas and Ebba are part of the model family, yet both, in different ways, are left bereft by it. They feel as if they are missing out on a more fulfilling life of hedonism and ceaseless, self-validating sexual adventure. The promise of meaning in the family setting slowly dissipates like the traces of a controlled avalanche. This film is not about a marriage, nor is it just about men and women; it’s about the fragile and ephemeral sense of meaning that people create when they come together.

Watch the trailer for Force Majeure: