Kosovo and Bosnia: the EU’s Iraq

It’s not just Iraq that has been destroyed by Western intervention. 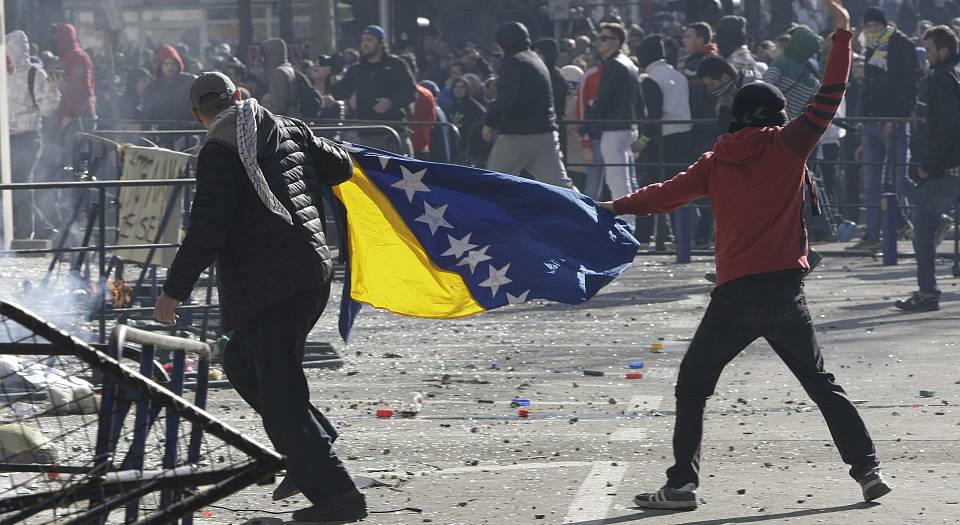 It is now widely accepted that the 2003 intervention in Iraq was disastrous, with many commentators arguing that the lack of any kind of forward planning and military policy exacerbated religious and ethnic tensions there. But little seems to have actually been learned from the invasion, as the recent US-backed, Iraq government-led use of a Shia militia to conduct a scorched-earth attack on the ISIS-controlled city of Tikrit demonstrates.

Tens of thousands of Iraqis fled after the West’s invasion in 2003, and the ensuing internal conflict. Today, new waves of refugees are fleeing both ISIS and the Iraqi government’s counterattacks. Iraq is a state that exists in a formal sense only. America has helped create a facade of democracy in Iraq – installing leaders favoured by the West. The recent rulers of Iraq have had no relationship to the people and therefore inevitably rule through extreme coercion, corruption, religious division and pork-barrel politics. The advantage for America and its allies is that this allows them to wash their hands of responsibility by blaming the ongoing catastrophe on the Iraqi elite.

However, it is not just Iraq that has been destroyed by Western intervention. Although there is far less public discussion about the European Union’s interventions in Bosnia and Kosovo, these cases clearly demonstrate the problems with intervention and the limitations of external rule. Both cases are notable because, like Iraq, they are widely presented as successful examples of intervention and post-intervention governance. Yet both Bosnia and Kosovo are collapsing internally. As has happened in Iraq, the EU has set up facades of democracy in both states, in which corrupt EU-chosen political elites rule.

Not only was Bosnia created by America and the EU, following the break-up of Yugoslavia and the bloody civil wars that followed, but it is a country that continues to be controlled by the EU through the office of the High Representative. The High Representative has just recently announced that, 20 years after the end of the Bosnian war, the office is still vital. This is because, without EU rule, Bosnia would no longer exist. The anti-government riots that broke out last spring revealed that the state itself can barely function at all. Even the Guardian, one of the most belligerent cheerleaders of Western military intervention in the Yugoslav wars, painted a devastating picture in a recent editorial.

Bosnia is a moribund country with high unemployment, high levels of corruption and a totally disillusioned and disaffected citizenry. This should come as no surprise. After the break-up of Yugoslavia, the EU set up a system in which rule was sustained through ethnic groups, led by EU-favoured politicians. The only way in which the West could cobble together a Bosnian state was effectively to bribe Muslim, Serbian and Croatian political elites.

Meanwhile, a quiet crisis is occurring in Kosovo. Kosovo, too, is a state that only exists because of Western military intervention. In 1999, NATO went to war in support of the Kosovo Liberation Army’s (KLA) military campaign to secede from Serbia. In 2008, Kosovo formally declared independence from Serbia and has been recognised by most EU member states. Now, even relations with Serbia are normalising following the Brussels Agreement. The only problem is that no one wants to live there anymore. In the last few months, thousands of Kosovo Albanians have been leaving Kosovo to claim asylum in Germany and other places. An estimated 50,000 people and rising (out of a population of about 1.8million) have left since the start of this year.

Speculation abounds as to why Kosovo is now unravelling. The immediate cause is probably to do with visa changes with Serbia, which make it easier for citizens of Kosovo to leave. But the deeper, underlying causes are numerous. Kosovo has a 60 per cent unemployment rate for young people. It is a small state run by a clique of racketeers and murderers and there is no economic plan beyond personal enrichment. To add to the mix, the European Union Rule of Law Mission in Kosovo (EULEX), a deployment of EU police and civilian resources to Kosovo, has itself been embroiled in a vast corruption scandal. EULEX is the EU’s biggest foreign-policy mission, which was set up following independence in 2008 and the winding up of the United Nations mission, UNMIK. It employs 1,600 people and costs €110million each year. EULEX’s mandate is astonishingly vast. Its job is to set up and oversee Kosovo’s justice system, police, border controls, maintain the rule of law, integrate minorities and investigate and prosecute war crimes, corruption and organised crime.

Unfortunately, due to EULEX corruption, illegality and murder has boomed. The KLA-run government has conducted large-scale harassment of Serbs and Roma, and has engaged in serious human-rights abuses and political murders. Moreover, despite a wealth of evidence of political murders, embezzlement and corruption at the highest levels of government, EULEX has singularly failed to prosecute any important figures. EULEX itself has, according to some observers, more or less fused with Kosovo’s political elites, and has also been accused of covering up corruption within its own ranks.

In Kosovo, as in Bosnia, Western intervention has effectively created these states and is the only force keeping them together. The EU has put in place elites which owe their position to Western intervention. Democratic processes in these countries are stage-managed, with no real political process or connection to their citizens. The EU has a major stake in maintaining the fiction that these are democratic, functioning and self-governing societies; poster children, no less, for benevolent humanitarian intervention and the EU’s more ‘ethical’, normative style of changing societies, through influence and example rather than outright rule. Having set up their political systems and slotted agreeable elites into them, the EU rules these states using opaque and unaccountable systems of bureaucratic organisation. These systems sit above the political process, but, every step of the way, they allow the EU to disavow its own control. However, as we have seen in Iraq, the real consequences of this kind of external rule cannot be hidden. Citizens either vote with their feet and try to get out of the country, or they become increasingly angry and disaffected. As with Iraq, it is only when the citizens of Bosnia and Kosovo take their futures into their own hands that things can get better.