The rootless politics embodied by Clegg is now widespread in Westminster. 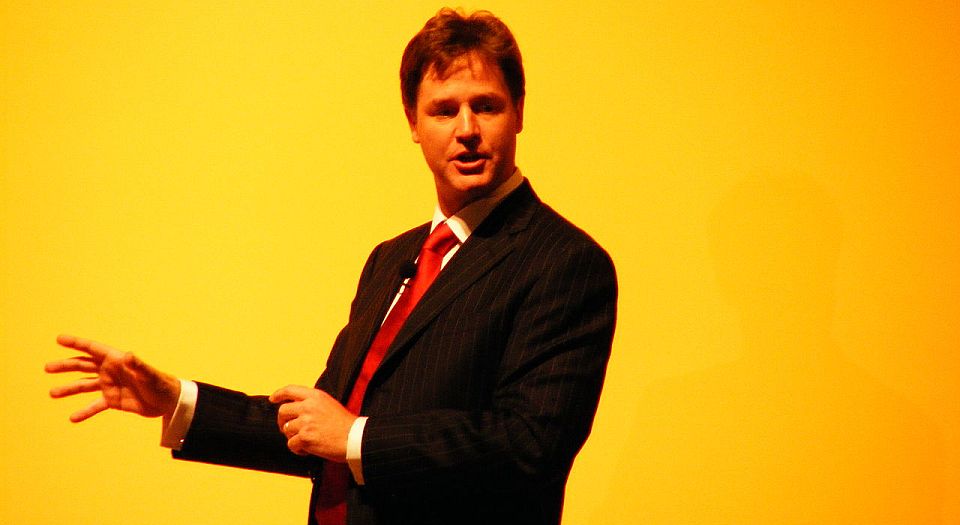 It’s easy to take the piss out of the Liberal Democrats. There’s certainly no lack of material. This week saw Cleggers and Co release their novelty General Election music video, with cut-up clips of Nick strutting to the tune of ‘Uptown Funk’ – a stunt that mash-up king Cassetteboy perceptively likened to dad-dancing. Last week, we had George Osborne’s lanky mate, and Lib Dem would-be chancellor, Danny Alexander, presenting his alternative Lib Dem budget – complete with on-brand yellow-gold brief case – to a nonplussed assembly of eight or so backbenchers.

As the General Election approaches, the Lib Dems, the late-stage media darlings of the 2010 election, are the butt of the joke. From The Times to the New Statesman, everyone’s having a pop. Meanwhile, the masses look on indifferently. The party no one ever cared about seems more pointless than ever. With the Lib Dems regularly polling below UKIP, and wrestling for fourth place with the Greens, the potshots have the feel of a last hurrah. The long-serving whipping boy of both left and right is on his way out. It’s a swansong snipefest, commemorating the Lib Dems’ five years of faithful service. But, in a General Election campaign full of gaffes, brain-fades, botched tactics and, above all, a startling lack of substance, is this anti-Lib Dem bile really justified?

The yellow-hued mudslinging is often premised on the idea that the Lib Dems, having sold their souls to the Tories and reneged on key manifesto pledges, deserve all they get. The party’s bid to reform the House of Lords fell flat on its face, it relented on tuition fees, and now there is talk of Clegg conceding to the Tories’ in-out referendum on EU membership, should they decide to reform their unholy alliance in May. These Tory toadies, the tired narrative goes, have signed their own death warrant. They sold out their principles for the sake of being at the big-boy table.

But, as Mick Hume pointed out on spiked in 2010: ‘To be a traitor to a cause, you first need to have one to betray.’ The Liberal Democrats, the supposed guardians of freedom and democracy, have never truly given two shits about either. In fact, most of the policies the party eventually backtracked on were neither liberal nor democratic. With Clegg a former MEP and avowed Europhile, the Lib Dems are by far the most wedded to the European Union – despite the fact it is the most singularly undemocratic institution in the Western world. What’s more, in continuing, at least publicly, to oppose the EU referendum, the party has imbibed the Brussels mantra that the demos only ever get in the way. The party’s proposed bill for reforming that homegrown affront to democracy, the House of Lords, ended up being somehow even more anti-democratic than the status quo. As for the pledge on tuition fees, even Cleggite and former Lib Dem leader Paddy Ashdown called it ‘opportunistic’. And despite what some SU crusties might tell you, a BA is not a human right.

With no roots in society, no social or political constituency, and not even a vestige of genuine liberalism to cling to, the Lib Dems have always been an empty vessel, which the media class, in particular, has dutifully poured its party-political frustrations into. Clegg’s rise to prominence in 2010 was more or less completely created by the media. The party’s modest success at the polls, not to mention their nosedive since, showed that Cleggmania was a disorder most of the public were firmly inoculated against. The Lib Dems were little more than the bien pensant protest vote, a bunch of metropolitan think-tank people who disillusioned metropolitan think-tank people hoped would have a civilising influence on the cranky Tories.

But for all the mockery, the Lib Dems are far from irrelevant. The snipes firing from Labourites and Tories only obscure just how similar those parties are to Clegg’s much-maligned party. Not only, in these times of grinding political centrism, is there barely a bone of contention between the three main parties, but the rootless, technocratic, media-obsessed brand of politics the Lib Dems embody is now how business is done in Westminster. Labour’s grassroots support has all but evaporated, its ranks of ex-SPADs labouring under the illusion that banging on ad infinitum about ‘our NHS’ is the same as connecting with the thoughts and aspirations of working-class voters. Meanwhile the Tories, having riled the Home Counties in their shift to the socially liberal centre, have betrayed their buttoned-up support base. The recent panto-politicking over the televised leaders’ debates showed that all of the main political parties are more concerned with playing to the press gallery than their traditional constituencies.

With 7 May fast approaching, all sources suggest the Lib Dems days at the big-boy table are numbered. But in some ways that doesn’t really matter. They’re all Lib Dems now.