Ignore the well-paid ‘anti-racists’ — racism in the game has been on the wane for years. 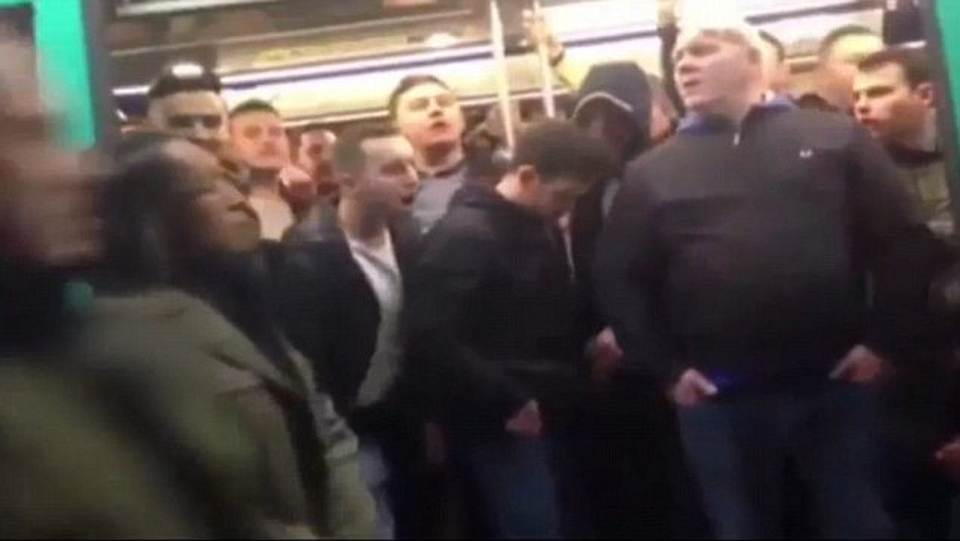 They must have been cracking open the bubbly in Kick It Out HQ this week. The video of Chelsea fans singing ‘we’re racist’, and shoving a black passenger who was trying to board a train, was manna from heaven to the anti-racist industry. Hurrah, this was proper old-fashioned football racism. That’s campaign funding secured for another year!

It made me think. If racism in football didn’t exist, the professional anti-racists would be out of a job. Or, to be more precise, if racism didn’t exist, they’d have to invent it. And, to be honest, what generally passes for racism in football perfectly fits that definition. It’s phoney racism. Racism Super-Lite, hyped up for all its worth. Minor incidents – people using inappropriate or culturally insensitive language – are seized upon and blown out of all proportion. There is a constant trickle of such incidents; breaches of the stifling rules of modern racial etiquette – or ‘microaggression’, as they call it on US campuses. Whether it’s Roy Hodgson making a clumsy joke about monkeys in space, Dave Whelan talking about ‘chingalings’ and Jews ‘chasing money’, or Mario Balotelli retweeting a supposedly anti-Semitic joke, most of what passes for racism is pretty innocuous. It’s certainly not the hateful, aggressive racial bullying of which we caught a glimpse in that grainy Paris video clip.

More often than not, the offence isn’t even intended. Take, for example, the case of non-league Kendall Town’s commercial manager Graham O’Callaghan, who resigned after being charged by the Football Association for posting supposedly ‘abusive and insulting comments’ on social media. What kind of vile hate speech prompted the FA to act? O’Callaghan, a Chelsea fan, posted ‘yes, Chelsea versus the yids cup final’ in anticipation of Chelsea’s League Cup Final clash with Spurs. O’Callaghan insisted that no malice was intended: ‘As far as I’m concerned, it’s a bit of banter, it’s what Chelsea fans have always referred to Tottenham as.’ I suspect the ‘no malice intended’ defence will fall on deaf ears (am I allowed to say that?). In today’s stifling ‘You Can’t Say That’ culture, it doesn’t really matter whether there was any intent to cause offence. The etiquette inquisitors at the FA take their cue from the influential 1999 Macpherson report into the killing of black teenager Stephen Lawrence. Macpherson defined a racial incident as ‘any incident which is perceived to be racist by the victim or any other person’. In other words, racism is entirely in the eye of the beholder. Even if the ‘victim’ isn’t offended, as long as someone takes offence, then you’ll find yourself bang to rights. It’s no surprise that, in these hypersensitive, thin-skinned times, there is no shortage of willing complainants.

The ugly incident on the Paris Metro was clearly of a different order. The Chelsea fans on the train undoubtedly behaved in a boorish, offensive and intimidating way. But the febrile reaction to the incident has been completely disproportionate. There have been calls for the perpetrators to be jailed, sacked and given lifetime bans from football. Adrian Hanstock, deputy chief constable of the British Transport Police, even suggested racist fans should be banned from watching football on Sky TV. ‘If their subscription TV was cancelled’, said Hanstock, ‘it might put some thoughts in their mind’.

Why has a relatively minor incident been blown out of all proportion? Why has everyone from British prime minister David Cameron to French president Francois Hollande felt compelled to condemn the actions of a handful of Chelsea fans? Because it reinforces chattering-class prejudices about white working-class football fans: they are viewed as loutish, uneducated bigots who vote for UKIP, drive white vans and drape St George flags from their windows. It confirms the belief held by bien pensant liberals that racism in football never really went away. The Independent ran a story claiming that Chelsea fans topped the league table for racist-chanting arrests. On the surface, that sounds alarming, doesn’t it? But look at the absolute number of arrests and it tells a different story. In the past 13 seasons, the total number of arrests for racist chanting by Chelsea fans was 28. That’s right. Just 28 arrests. In 13 seasons. Do the maths. It works out at just over two arrests per season. Given that Chelsea’s average home gate is around 41,000, I’d say that two arrests a season is pretty conclusive proof that racist chanting is a virtually non-existent problem.

The ironic thing about the preoccupation with racism in football is that it bears little or no relation to the reality. In fact, I think there’s some kind of social law at work here: let’s call it Duleep’s First Law of Fantasy Racism. It appears to me that football’s anti-racism industry expands in inverse proportion to the diminution of racism in the game. Professional football, let’s not forget, is one of the mostly ruthlessly meritocratic and colourblind industries in the UK. Black people are actually overrepresented in the game – around a quarter of professional footballers are black. And terrace racism, commonplace in the 1970s and 1980s, is no longer a significant problem. There’s a commonly held myth that the monkey grunts and racist terrace chants disappeared as a result of the good work of the Kick It Out campaign. Anyone who is a regular match-goer knows that mass racist chanting was disappearing long before Kick It Out was established in 1993. I think the decline of terrace abuse happened organically – a product of the growing number of black players in the domestic game combined with the increasing integration of black people into British society, particularly in cities like London, Manchester and Birmingham. This certainly didn’t happen because of cultural sensitivity training or equality-impact audits. Working-class people renegotiated these relationships themselves. They did so without Kick It Out it or Show Racism the Red Card. They did so without adhering to the arcane codes of racial etiquette formulated in university campuses and local authority equality units. That’s why you’ll often find very un-PC racial banter coexisting with friendship and camaraderie across ethnic boundaries.

I’m not naive enough to believe that bigotry has been eradicated. You’ll always find residual traces of old-fashioned racism if you trawl social media. But the frothing overreaction to a rare and relatively minor example of overt racism shouldn’t be allowed to go unchallenged. To me, it reveals far more about the Guardianista’s contempt for white working-class people than it does about the supposed problem of racism. There’s nothing remotely progressive about this warped strain of anti-racism. It’s utterly illiberal, dripping with snobbery, and only serves to legitimise the ‘mind your language’ culture that is suffocating football.