Progressives are now the most fervent promoters of racialised thinking. 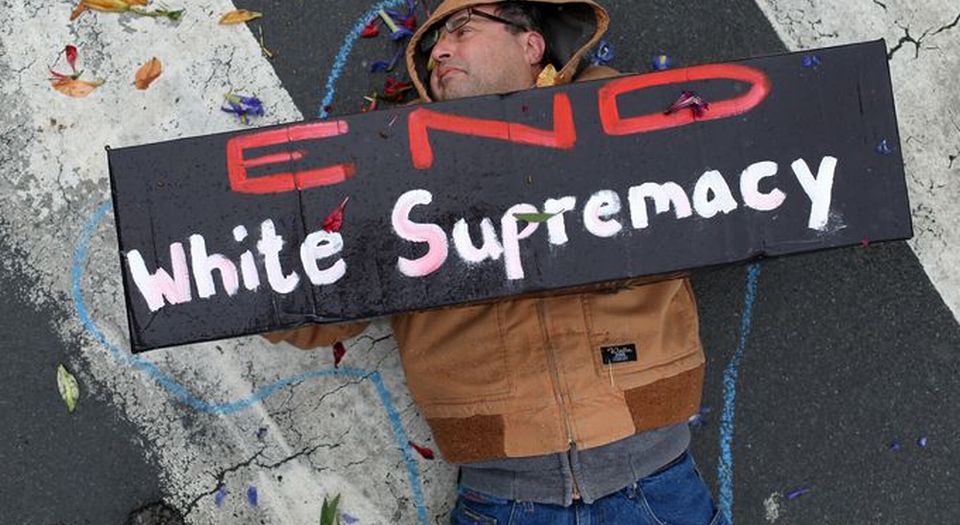 In the political and media tumult that followed the recent American police killings of two black men, one thing has been very striking: the most rigid racialised commentary has come, not from the police or the state, but from the protesting liberals and radicals. In the aftermath of the shooting of Michael Brown in Ferguson, Missouri and the strangling of Eric Garner in New York City, it hasn’t been American officialdom that has explicitly played the race card, talking about whole sections of society as homogenous entities with particular characteristics that need to be closely monitored and possibly corrected. No, it’s the supposedly progressive side in the debate that has done this, which has indulged in highly racialised political commentary and action. This tells us a great deal about where the racialising dynamic is really coming from today.

The clearest sign that a rigid racial consciousness is now at least as strong, if not stronger, among the supposed opponents of police brutality as it is among the police themselves came during the big Ottawa protest over the grand jury’s decision not to indict the cop who killed Brown in Ferguson. The protest was, in essence, segregated. The radical organisers of the demo paid lip service to the ideal of solidarity, saying ‘we appreciate the solidarity shown by White and Non-Black People of Colour’, but then suggested whites should march separately from blacks. ‘Please refrain from taking up space in all ways possible’, they told white attendees, before cautioning against white people speaking to the media, because ‘you should never be at the centre of anything’. The protest was slammed by critics for being not so much ‘anti-racist’ as ‘pro-segregation’.

Imagine if, post-Ferguson, the police in Missouri had issued instructions that effectively segregated political marches. There would, rightly, have been outrage. But among the apparently more progressive sections of public life, racial thinking now comes naturally and causes little controversy. Beyond Ottawa, liberal media outlets around the world were packed with commentary that reduced both America’s black and white communities to their homogenous essence, to their most basic, and in some cases base, shared characteristics. This could be seen in the headlines splashed across some of the globe’s most respectable publications. ‘White people are finally starting to get it’, said Time. ‘Dear white people: your discomfort is progress’, said the Guardian. ‘What white people need to know, and do, after Ferguson’, instructed the Washington Post (in a piece written, of course, by a white person). And what must this mythically monolithic horde of exactly similar white people do after Ferguson? For a start, whites must more self-consciously conceive of themselves as a race — ‘you’re mistaken if you don’t think white is a race, [and] you’re mistaken if you think you can remain neutral’, says the Post writer. Once we think more racially, apparently us whites will be able to see that we often adopt an ‘inherent superiority’ to other races and we often ‘reinforce white privilege’, sometimes ‘unintentionally’. In short, white people – all white people – are inherently racist, even if they think they aren’t, and the only way for them to overcome their racism is to become more racially aware and more sensitive to the needs and struggles of other races (or ‘black folks’, as the Post’s racially conscious white writer quaintly calls them).

This incitement to racialised thinking from the Washington Post speaks to the general tone of liberal public debate post-Ferguson: the focus has been less on the structural and economic failings of post-civil rights America, and more on the problematic attitudes of ‘the races’ that inhabit America and the question of how those attitudes might be improved and corrected in the name of social peace. Even the now omnipresent term ‘white privilege’ is not used to denote economic, social and legal structures that make life harder for blacks than for whites (and even here, of course, ‘white privilege’ would be a crude, unsatisfactory term) – rather, it refers to the problematic, sometimes unwitting attitudes of white people, the characteristics of one of the races, which must apparently be kept in check and ideally educated out of existence.

The hardening of racial consciousness was most clearly expressed in an exchange published in the UK Observer. Featuring a white and black writer performing their racial roles to perfection – the white writer expressing guilt and self-disgust, the black writer talking about herself and her entire race as perennial victims – the exchange provided a disturbing glimpse into how the old prejudices about there being natural differences between the races have been replaced by a new prejudice about there being rigid, ossified cultural differences between the races. The black writer, Rebecca Carroll, selected by the Observer as representative of all black people, everywhere, across all time, said blacks are still reeling from a ‘legacy… of pain and strife’, while whites are still benefiting from a ‘legacy… of cultural decimation, violence and human ownership’. Racialised thinkers once claimed that biology determined the mental and moral make-up of blacks and whites; the new racialised thinkers claim history is the deterministic power, making all black people feel weak and all white people feel inherently privileged. The solution? White people – all white people – must ‘check your tone, your tenor and your composure’ in order to avoid making black people – all black people – feel ‘pretty awful’, said Carroll. The white writer, the Guardian columnist Jess Zimmerman, responded to this demand for heightened racial sensitivity in all interactions between white and black people by promising to become more ‘racially conscious’ and to try to educate white people who ‘aren’t racially conscious’. The take-home message: we all need to recognise that we are racial creatures and we all need to think more racially.

Zimmerman’s distinction between white people who are racially conscious and white people who aren’t is also striking. It explains much of the dynamic behind the protesting over Ferguson and Garner by white liberals everywhere from Ottawa, Canada to the Westfield shopping centre in Shepherd’s Bush, London. At these protests, the highly racialised narrative of the new politics of identity has been much in evidence, with white protesters holding up placards saying things like ‘My white privilege keeps me safe’ and ‘I won’t get shot’. These protests are not about offering solidarity to blacks who suffer from police brutality – they’re about white liberals advertising to the watching world their moral sensitivities, their white sensitivities, the fact that they have escaped, at least partially, the privilege trap of their race and have become aware of how their attitudes, and their ‘tone, tenor and composure’, might harm other races. It’s a display of a superior form of white racial consciousness, an attempt by white liberals to distinguish themselves from the white mob, which, as everyone from the Washington Post to Time is keen to tell us, has in-built, historically determined racial flaws which must be condemned and somehow fixed.

This is why liberal Londoners last night took the bizarre decision to host an Eric Garner-sympathising die-in at Westfield shopping centre, which is Australian-owned and has nothing to do with the American state — it’s because they wanted to contrast themselves to the white mob, in this case Christmas shoppers, and demonstrate their racial superiority, their ability to be ‘racially conscious’, over the unwitting white privilege and inherent racism of all other white people. The irony is almost unbearable: there’s a powerful strain of racial superiority to these supposedly anti-racist protests; the white liberals are effectively saying: ‘By dint of our racial consciousness, we are superior to the less well-educated, less aware members of our race.’ This echoes the biological politics of race of the Victorian period, which was frequently aimed at exposing the moral inferiorities of the white underclass, as well as being devoted to exposing the savagery of foreign blacks.

The liberal set’s post-Ferguson incitement to heightened racial consciousness shows how the definition of both racism and anti-racism has changed in recent years. Racism was once understood to be an ideology cultivated by the rulers of society for certain political or economic ends. Now it is seen as an inherent trait in the populace, a problematic attitude that lurks in everyone’s soul, whether they know it or not. Anti-racism once meant battling against the laws and structures that hampered certain peoples’ freedoms, fortunes and opportunities. Now it means policing the minutiae of individuals’ speech and behaviour, down to educating them about their ‘tone, tenor and composure’ when they engage with anyone of a different race. How tragic: it is now so-called ‘anti-racists’ who most explicitly divide the races, through presenting them as deeply divergent peoples, determined by profoundly different histories, whose every interaction must be implicitly policed by the racially aware.

Post-Ferguson, we’re witnessing the hardening of a new racial set-up. One of the great tragedies of the twentieth century was that the demise of the aggressive biological racism of much of the Western world’s political and intellectual classes did not lead to the creation of a post-race world; on the contrary, the old racism was superseded by different forms of racial thinking, in the guise first of a new race-relations industry, then of the politics of racial identity, and more recently of an official ‘anti-racism’ that is in fact an incitement to constant and myopic racial thinking. So entrenched is the new racialised thinking that many people now think it perfectly normal, and even good, to define themselves by their racial make-up and to engage with other people from a highly racialised standpoint. The mid-twentieth-century crisis of racial politics, particularly following the horrors of Nazi Germany, opened up the possibility of a world free of the curse of racial thinking. But it was never realised. Instead, the new politics of identity and racial sensitivity is shoving people back into highly distinctive black and white boxes that earlier progressives longed to free us from. Where the old racists defined people by their biological make-up, the new racially aware rulers and thinkers define people by their apparently inherent moral characteristics or their historically determined sense of privilege or shame. The end result is the same in both cases: people are judged by their race, and separated by race. The brutal physical segregation of the past has been replaced by a new moral segregation, by a segregative mindset that encourages cautiousness and awkwardness between ‘the races’.

What the new racialised thinking and activism ultimately speak to is a crisis of universalism. Today, tragically, there is no powerful universalistic, democratic movement or impulse that might successfully negate the return to racial thinking among vast sections of Western public life. The current weakness of the promise of universalism, the weakness of the ideal of a common humanity that might strive to create a more modern, progressive, wealthy world, has made true solidarity next to impossible and has allowed racial thinking and racial identity to flourish. To break free of the depressing prison of identity, of defining ourselves by our natural characteristics or our race’s historical experiences or by anything else over which we have no control, we need to breathe life back into the universalist project.