Phillip Hughes: mourning sickness Down Under

Why the global grieving leaves me cold. 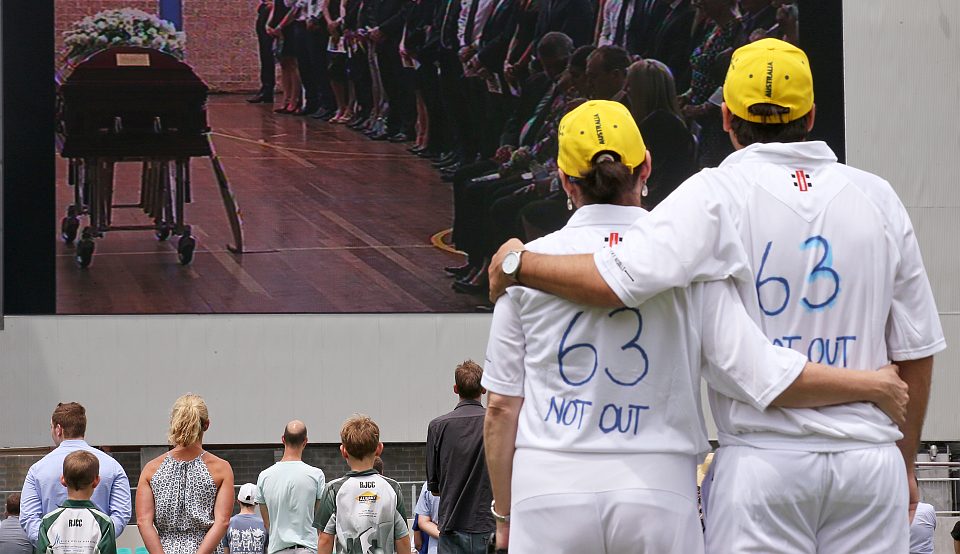 The cricket world has been in mourning this week. Understandably so. The death of Australian batsman Phillip Hughes, who was struck by a bouncer, has shaken everyone who loves the game. But the public reaction to his death has left me with mixed feelings. It’s hard not to be touched by Aussie captain Michael Clarke’s grief over the loss of his friend and teammate. But I feel more uneasy about the vicarious grief expressed by those who neither know nor care for cricket, not to mention the inevitable kneejerk calls to make cricket a safer sport

Let me declare an interest. Cricket is in my DNA. My father was cricket-obsessed and he passed that love of the game on to me. So although I never met Hughes, and although I regard the Aussies as the ‘auld enemy’, I was shocked and saddened to hear of his tragic death. He was one of us, part of the global cricket family. There, but for the grace of God, go I. That’s what any batsman who has ever faced a short delivery, or any fielder who has ever crouched at short leg, was thinking this week. That’s why, from Mumbai to Middlesex, from Sydney to St Kitts, cricket lovers across the world paid their respects. That’s why they joined in the viral #putoutyourbats tributes to Hughes, propping their cricket bats against a wall or a garden fence and posting a photo on Twitter. Cricketers might get hurt, but they aren’t supposed to die. Twenty-five is no age at all.

But it was the tears that made me start to think again. Of course, you need a heart of stone not to be moved by Clarke’s stirring speech at the funeral service. It’s hard to watch a man struggling to hold his emotions in check as he paid tribute to his dead friend. But it wasn’t just Clarke who was welling up. The whole of Australia seemed to be weeping, too. The funeral was broadcast live on television and relayed on big screens throughout the nation. Don’t you think that’s a bit odd? Funerals ought to be very private occasions. Hughes wasn’t the head of state. He wasn’t even a regular in the Australian test squad. Sure, he was a well-known sports personality, but that doesn’t mean his funeral should be a national event.

I get why cricket lovers should put aside their national or club allegiances and pay their respects to the Aussie batsman. It’s a very decent, human thing to do; a gesture of solidarity from the cricketing fraternity. But Hughes’ death touched people who had little or no interest in cricket; people who wouldn’t know a googly from a grubber. It was, as many commentators have observed, Australia’s Diana moment. And here’s where I have a problem with the public grief-fest: Instead of being treated as a tragedy for Hughes’ nearest and dearest, instead of letting them grieve in private, his death has become national property.

How do we explain the extraordinary displays of public mourning? Guardian journalist Anne Perkins observed that Hughes had, in death, become a metaphor. ‘Australia was mourning a son felled by a freak bouncer in the middle of a match – 63 not out – whose death had elevated him from a first-class cricketer with an on-off place in the Test side into a symbol of all that Australians believe is great about their country.’ Chris Henning, in the Sydney Morning Herald, believes that it was the batsman’s ‘everyman’ qualities which touched his compatriots’ hearts. ‘A good bloke, without arrogance, who was generous to rivals and wanted to earn his place in the national team fair and square. How could he not be the person everyone wants to be?’, wrote Henning.

Sure, he was a likeable guy with a larrikin streak who connected with ordinary Australians. But that doesn’t mean there should be TV cameras at his funeral. That doesn’t explain the extraordinary media circus that descended on his hometown of Macksville. Hughes’ death might have fleetingly brought Australians together, but it seems to me symptomatic of an absent centre in public life. It’s the same reason why people in Britain regularly indulge in what my fellow spiked contributor Patrick West has described as ‘recreational grief’ over dead celebrities. Where religion or politics might once have provided common purpose and meaning, now we find an ersatz communion in new public-grief rituals such as makeshift shrines, online books of condolence and minutes of silence.

The other thing that troubles me about the reaction to Hughes’ death is the inevitable quest to make the sport safer. Do we need to rethink helmet design? Should we curb aggressive bowling? Cricket Australia immediately announced an investigation into player safety. ‘Statistics say it’s clearly a freak accident but one freak accident is one freak accident too many’, said James Sutherland, chief executive of Cricket Australia. Some commentators blame it on the bouncers. ‘Undoubtedly, the catastrophic head injury suffered by Phillip Hughes at the SCG on Tuesday was a freak accident, but it doesn’t diminish the fact it is within the rules of the game to throw a 160 gram missile, at speeds approaching 160 kilometres an hour, at a batman’s head, neck or throat’, wrote Australian journalist Sam de Brito. Another commentator pointed the finger at the culture of sledging and intimidation: ‘Hughes’ death was a tragedy, but the circumstances that led to the tragedy have been fostered by Clarke and others. You think of Brett Lee laughing as he tried to hit English popinjay Piers Morgan or of Australian speedster Jeff Thomson telling TV viewers that he enjoyed hitting batsmen more than getting them out.’

I think a dose of perspective is needed here. It’s natural that, when a sportsman dies on the field of play, we ask if the tragedy could have been prevented. In the case of Hughes I think we just have to accept that his death was a terrible accident and that the risk of others suffering the same fatal traumatic injury are remote. ‘This was a freakish accident because it was an injury to the neck that caused a haemorrhage in the brain’, explained Peter Brukner, the Australian team doctor. ‘The condition is incredibly rare. It’s called vertebral artery dissection leading to subarachnoid haemorrhage; if you look in the literature there are only about 100 cases ever reported.’ Yes, cricketers get hurt, but they very rarely die as a result of being struck by a cricket ball. No more than half-a-dozen cricketers have died in this way throughout the entire history of first-class cricket. The bigger danger is that we overreact to an extremely rare incident and damage the sport as a consequence. Strip out risk and aggression and you will invariably diminish the thrill.

Former Australian cricketer Michael Slater declared that Hughes’ death has ‘changed cricket forever’. I really hope that doesn’t happen. It’s right that we should stop to pay our respects to Hughes. But cricket can’t wallow in a permanent state of mourning. It’s time to pick up the bats from our porches and carry on batting. As Clarke put it so poignantly, ‘We must dig in and get through to tea. And we must play on.’