Fighting for press freedom in the 21st century

On spiked’s storming conference with the Newseum in Washington, DC. 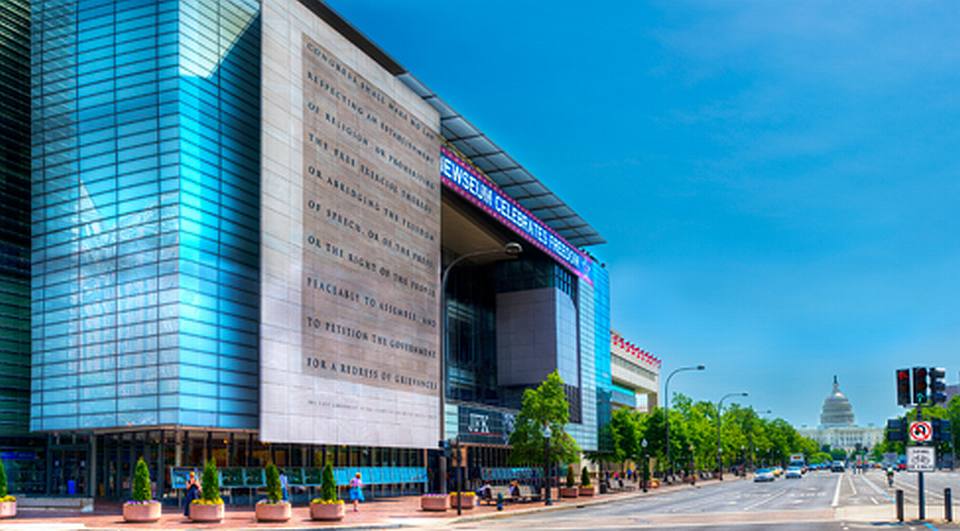 On 5 November, spiked and the Newseum Institute in Washington, DC held a one-day conference, sponsored by News Corp, on the state of press freedom in the twenty-first century. Speakers from various disciplines and professions gathered to tackle two burning questions, in two lively debates. In the first, a panel of editors and activists asked what are the biggest threats to press freedom today and how they might be tackled. In the second, professors, news reporters and social-media pioneers gathered to explore the future of the press in these hi-tech times, and ask whether the era of handheld publishing and a million blogs blooming calls into question the old role and authority of the dead-tree press.

The freedom-celebrating Newseum on
Pennsylvania Avenue in Washington, DC.

In the spectacular and erudite surrounds of the Newseum on Pennsylvania Avenue in the heart of DC – a museum devoted to celebrating press freedom and tracing the history and importance of the news media – spiked’s free-speech campaign, Free Speech Now!, and the brilliant staff of the Newseum welcomed an audience of 120 people, including 50 school students, to think about and mull over the liberty and standing of the press in this young millennium.

The first debate brought together Reason’s editor-in-chief Nick Gillespie, Courtney C Radsch of the Committee to Protect Journalists, and spiked’s editor Brendan O’Neill to discuss the new assaults on press freedom. Titled ‘Taming the Messenger: The New Threats to Press Freedom’, and moderated by Helen Searls of Feature Story News, this pressing, provocative discussion explored the various, often subtle ways in which the liberty of the press is being shackled anew in the modern West.

The Newseum’s reminder to US politicians of the
liberties embodied in the First Amendment.

Gillespie talked about the problem of conformism, and how the reluctance of journalists to break the mould and be daring often undermines their own profession’s freedom. Radsch raised the problem of America’s support for authoritarian regimes that crush press freedom, and how this calls into question both America’s stated commitment to this historic liberal ideal and its ability to promote it internationally. O’Neill talked about the post-phone hacking climate in Britain, and argued that Western journalists too often defend freedom for ‘ethical journalists’ but not for the raucous, rabble-rousing tabloids. ‘Press freedom for ethical journalism only is not press freedom’, he said. ‘It’s press privilege.’ He defended the right of the press to ‘rabble-rouse, dirt-dig, mud-sling, titillate and entertain’, as well as, of course, to speak truth to power.

In the second discussion, ‘The Press in the 21st Century: Are We All Journalists Now?’, an esteemed panel clashed over the question of what makes a journalist. If you write and publish stuff, whether on a blog, a Twitterfeed or a bedroom-started magazine, are you automatically a journalist, or is there more to it than that, the panellists asked in this session chaired by O’Neill?

A Free Speech Now! banner at the Newseum.

Gene Policinski, the COO of the Newseum Institute, argued that the liberties embodied in the First Amendment – the freedoms of speech and the press – mean everyone has the right to be, and to claim to be, a journalist. Whether they are any good or not is for us to decide. Simon Marks, president of Feature Story News, put the case for traditional journalism, arguing that you need certain skills in this game. Professor Jane Hall of the American University and Mandy Jenkins of Storyful brought their academic and professional expertise to the table, discussing how new technologies can improve how journalism is done but shouldn’t replace it with something new and inferior. And Ray Suarez, the host of Inside Story on Al-Jazeera, talked about the importance of experience and trust-building in becoming a journalist – how can you demonstrate to your audience that you should be taken seriously?

The audience threw themselves into the debate, discussing how they access news and the difficulty of deciphering reliable content from non-reliable content in this era of constantly rolling info, and raising more concerns about the denting of press freedom today. A key flashpoint issue in the audience-and-panel debate in this second session was the coverage of recent events in Ferguson, and the question of who shone most light on what happened there: smartphone-armed ‘citizen journalists’ or more traditional journalists? Suarez brought the end of the conference back to the press freedom theme that kicked it off, reminding us that three of his Al-Jazeera colleagues remain in jail in Egypt and calling on us to campaign for their release.

The conference dug down into the heart of the discussion about the press in the twenty-first century. Light was shone, arguments were made and disagreements were aired among a great line-up of speakers tackling the two big things the press must think seriously about today: its freedom and its authority. Viv Regan, the managing editor of spiked who oversaw the organisation and hosting of the conference with Policinski and the staff at the Newseum, said she hoped the conference would be the first of many spiked ventures in the US:

‘spiked and Free Speech Now! have been keen for a while to hold debates about freedom of speech and press freedom in America. Because we believe that Europe and the US actually face similar problems on the free-speech front. Even though the US has a First Amendment, and no European country does, nonetheless on both sides of the pond a climate of censorship is rising up on, campus, in political circles and in the press, and we think it’s time that freedom-lovers shared experience and ideas across borders and across the Atlantic. We hope to be back in the States very soon, to stir up further debate about defending freedom of thought and speech for all.’

You can watch videos of the day’s two debates. The first session, on press freedom, can be watched here. And the second, session, on journalism and new technologies, can be seen here.

For more information about the Newseum, visit its website here. And to find out more about spiked’s work in the US, email Neil Ross, our programme director in the States, at: neil.ross@spiked-online.com.