And the lame shall walk

Mankind now does what ancient peoples thought only God could do. 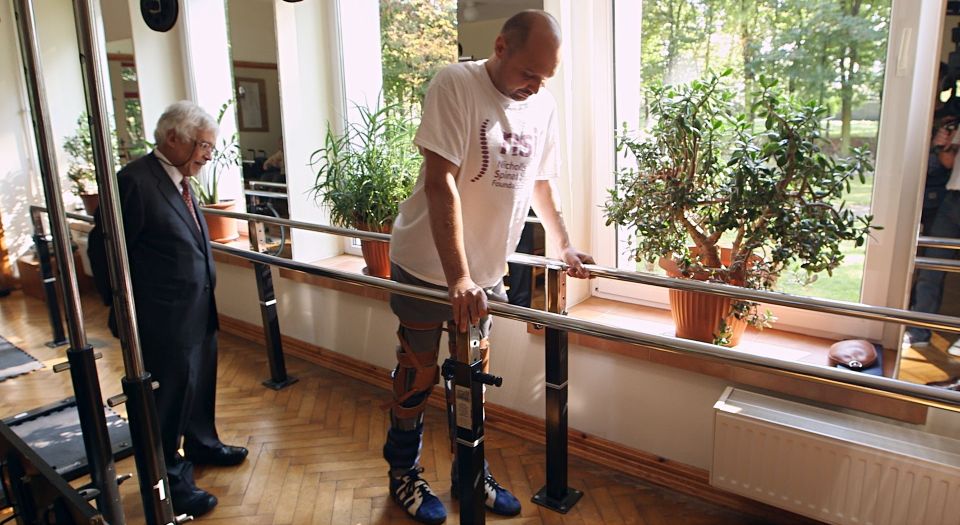 ‘The blind receive their sight, and the lame walk, the lepers are cleansed, and the deaf hear.’ So says Christ in Matthew 11:5, describing his miracle-making mission on Earth. Sadly, none of those amazing things actually happened back when Christ was skulking the planet. But they do happen today, all of them, thanks not to God or His son but to the most maligned, ridiculed, libelled-against creature of the modern era – Man.

In the twenty-first century, the deaf hear: a gadget called a cochlear implant brings sound and noise and music to even the emptiest of ears. The blind receive their sight, some of them anyway: simple operations like cataracts removal, and vastly more complex inventions like the bionic eye and eye transplantation, have allowed the blind to see. Not only is leprosy now cleansed (thank you, antibiotics) but so are legion other diseases that will have laid to waste whole communities in Biblical times. Indeed, if God tried to inflict a plague on a wicked people now, a few scribbled prescriptions from their local GP would likely hold it at bay and frustrate His vengeful ambitions.

And now, as revealed yesterday, the lame walk. For many years, through our development of prosthetics and technology, man has provided the miracle of movement and moral autonomy to the limbless and injured and others who wouldn’t have had a shot in hell of a good life back in Christ’s day. But what was reported to the world yesterday was different: a man who had been paralysed, who was incapable of moving his legs, moved his legs, and walked.

Yes, it was less dramatic than when Christ is said to have commanded a lame man to ‘Rise, take up thy bed, and walk!’, but it was no less a miracle – only a real rather than imagined one. Darek Fidyka, a 40-year-old Pole, was paralysed after being stabbed repeatedly in the back in 2010. His spinal cord was largely severed. But thanks to scientists in London and surgeons in Poland he can now move his legs and walk with the aid of a frame. The surgeons took cells from his nasal cavity – olfactory ensheathing cells, which enable the sense of smell, and which are among the most self-renewing cells in the human body – and then nurtured and grew them outside of his body before transplanting them into his spinal cord. They had just one drop of material to work with (consisting of around half a million cells) and they injected tiny amounts of it above and below his ruptured cord a hundred times over the course of six months. There was no flash of lightning, no instant magic, no Messiah in a smock demanding ‘Walk!’, and yet after three months Mr Fidyka felt his left thigh gain strength; he saw its muscles flicker; and then he took his first tentative steps, with the help of his therapists. The lame walked.

It’s hard not to be moved by Mr Fidyka’s description of what it is like to feel movement in once-paralysed legs – it’s like being ‘born again’, he said. (Which made me wonder if we might one day make real another miracle attributed to Christ in Matthew 11:5 – ‘the dead are raised up’). Professor Geoff Raisman, the chair of neural regeneration at University College London whose research was central to Mr Fidyka’s treatment, said this breathing of life back into broken, frozen limbs is ‘more impressive than man walking on the moon’. Some might think that is going too far; but it’s certainly possible that Mr Fidyka’s slow, wobbling walk is a case of ‘one small step for a man, one giant leap for mankind’. If mankind can fix paralysis, we will move into a whole new era of promise and possibility.

The raising up of the lame that humanity now seems capable of – which springs from decades of research into cell growth and cell manipulation, the development of new technologies, and much experimentation – crashes violently, and gloriously, against the way man is understood and discussed today: basically as a pest, a planetary poison, not capable of much besides hatred and destructiveness.

Ours is an era in which ‘manmade’ has become a dirty word. Indeed, this week, in keeping with every other week of this doom-laden new millennium so far, the good news that a lame man has been given the gift of gait is competing with, and being drowned out by, endless news about what a disaster ‘manmade’ things have proven to be. Headlines in recent days tell us that severe flooding in Kashmir was ‘manmade’; that the ebola crisis is ‘manmade’; that ‘manmade’ global warming is causing ‘weird weather’ and ‘extreme weather’. The message we receive all the time today is that manmade is bad, that man makes only a mess, especially of nature, which he has raped and abused and irreparably damaged.

But the miracle of the first big blow launched in a potential new war on lameness, on paralysis itself, is also ‘manmade’. As is, of course, the Enlightened, reasoned, technological, industrialised world in which such a discovery became possible, and the buildings and laboratories and machines and instruments that facilitated this quickening of a paralysed man’s legs. The great curiosity of our times is that people are so downbeat about humankind and his impact on the world at a time when life for human beings has never been better – when global average life expectancy has leapt from 32 to nearer 70 in the space of a hundred years and when disease and poverty are in retreat in the face of man’s discoveries and development. Today, it is often those who have benefited most from centuries of reasoned thought and daring technological and medical breakthroughs – the comfortably off, cosseted political classes of the West – who are most spittle-producing in their condemnations of man’s hubris and harming of Mother Nature.

The miraculous mending of a shattered spinal cord reveals a fact little appreciated today: that man’s command over nature, his flagrant defiance of its laws and its whims, is not a bad thing – rather, it’s the thing that makes human life and human society possible in the first place. Our ascendancy over nature, our uncovering of its secrets and exploitation of its resources, is what has allowed us to grow in vast numbers and yet to live longer, healthier lives in cities which, just 300 years ago, no human mind could have conjured up. (More than half of humanity now lives in urban rather than rural settings.)

Those who would denounce man as just a bundle of DNA and cells that has got ideas above its station must now see that, far from just being cells, we control cells, we grow them and make them, we manipulate and improve them. We give new life to people, in a way that ancient communities thought only God could do. If we challenge the diminishing and libelling of humankind that has become the main political outlook of our era, and which physically holds back even greater risk-taking and experimentation and development, just imagine what miracles we will be capable of in 50 or 100 years.

Brendan O’Neill is editor of spiked. He will be speaking at the debates ‘Should even hate speech be free speech?’ in New York on 30 October and ‘Press freedom in the twenty-first century’ on 5 November in Washington, DC, as part of Free Speech Now!’s US event series. Book your free tickets here.