Banksy: the artist-in-residence of the new snobby elite

Far from challenging officialdom's prejudices, Banksy caters to them. 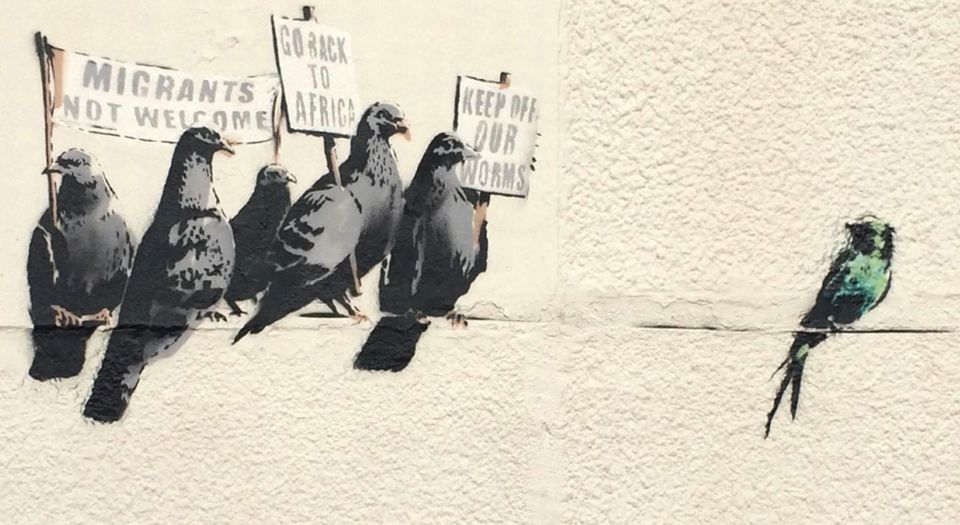 Renowned, pseudonymous street artist Banksy has become a firm fixture of Britain’s cultural lanscape. His ghostly, stencilled figures, which have sprung up on the UK’s dappled inner-city walls over the past two decades, have near-singlehandedly transformed graffiti from an ugly nuisance into the wallpaper of luvvie urban life. With his works fetching hundreds of thousands of pounds at auction, and bringing camera-wielding fans to any high street in which he leaves his mark, the appearance of one of his compositions is now a cause for celebration among shop owners and local authorities.

That’s what made it so jarring when, last week, Tendring district council in the east-England county of Essex decided to remove his latest offering almost before the spraypaint was dry. Rather than popping champagne corks and waiting for the foot traffic to rumble, the council acquiesced to complaints that the piece was ‘offensive’ and ‘racist’ and had the offending mural in Clacton-on-Sea painted over.

Even by Banksy’s standards, the piece was pretty tame. Depicting murky grey pigeons holding up anti-immigrant banners – ‘Go back to Africa’; ‘Migrants not Welcome’ – in the direction of an exotic-looking green swallow, it’s clearly a send-up of a perceived anti-immigrant bigotry, not an endorsement of it.

The council’s move was roundly criticised in the press as either bungling behaviour by officials who should have known the goldmine they were sitting on – a spokesman for Tendring claims they weren’t aware it was a Banksy – or, at the shriller end, as a flagrant attempt to silence Bansky’s voice. Writing in the Guardian, Jonathan Jones called it a ‘real and vicious act of censorship’: ‘The pigeons’ views are just too close to real opinions in the air… [Banksy] has been suppressed because he exposed the truth.’ Given that Clacton is the constituency of Douglas Carswell, the former Conservative MP who recently defected to the anti-immigration UKIP, this piece, Jones claims, was touching a racist nerve.

When it comes to scrubbing off graffiti, even high-class street art, the line between artistic censorship and prudent maintenance is never clear-cut. The piece was, essentially, an act of highfalutin vandalism, and the council was well within its rights to have the mural removed. And, indeed, the transience of street art is what gives it its verve. To insist that all Banksys be promptly covered in Perspex and handed over to the Arts Council would only suck out any of that anarchic, transient air that makes street art so striking.

Given that in the past month we’ve seen actual artistic institutions bow to the will of censorious campaigners, with the Barbican Centre in London cancelling controversial ‘human zoo’ installation Exhibit B after it raised the ire of anti-racist protesters, obsessing over this one dumb decision by one local council ignores the bigger picture.

Once it was truly controversial artworks, pieces that rattled the status quo, challenged perceptions and cut against the grain, that raised the ire of the morality police. Today, a free-floating offence culture means that an artwork doesn’t need to say anything too out there to get shut down. Bad – or simply misconstrued – art can find itself beyond the pale. (Incidentally, Exhibit B was also intended as an anti-racist piece.)

If there’s anything about the Clacton debacle that should get your back up, it’s the bizarre assertion that Banksy is somehow too-hot-to-handle – an artist probing societal iniquities and rattling received wisdom. This is patently ridiculous. His peacenik, anti-consumerist statements don’t challenge elite prejudices – they cater to them. His famed ‘Tesco Generation’ mural, which appeared in north London in 2008, depicts children – a stand-in for us, the little people – slavishly saluting a hoisted Tesco carrier bag. His motifs of rats, monkeys and rag-clothed children paint a picture of humanity as grubby, helpless and – in the case of the Clacton pigeons – prejudiced.

Indeed, in those grey birds you see a perfect reflection of the dank state of the immigration debate today. Immigration is, indeed, a growing concern of the British electorate. But rather than see this as a political challenge that should be confronted with a forthright defence of freedom of movement for all, pro-immigration voices merely dismiss the public as duped by the media, and hardwired with a distaste for the colourful, vibrant ‘other’.

While the racist politics those little placards embody has been pushed to the lonely fringes of British politics, left-leaning commentators still insist on wallowing in that ugly past. This all comes at the cost of examining the real barriers to open borders today. In an age in which horizons are so low, in which we are constantly told resources are finite and the huge economic growth necessary to provide prosperity for all will either come at the cost of the planet or our mental health, being anti-immigration begins to look like a practical solution to a problem of plenty. And this narrative, the real enemy of freedom of movement, comes straight from the top – the selfsame elite that spurn the masses for their anti-immigrant sentiments. In his mocking depictions of consumerism and the ‘rat race’, Banksy’s work embodies a similarly rank loathing of progress and the masses.

Censorship is no way of challenging a point of view that offends you. But Tendring council wasn’t censoring Banksy. And the bod behind the decision is probably now seething with regret, with fading pound signs in his eyes.