Tabloid-bashing crusaders enabled the state to treat journalists like jihadists. 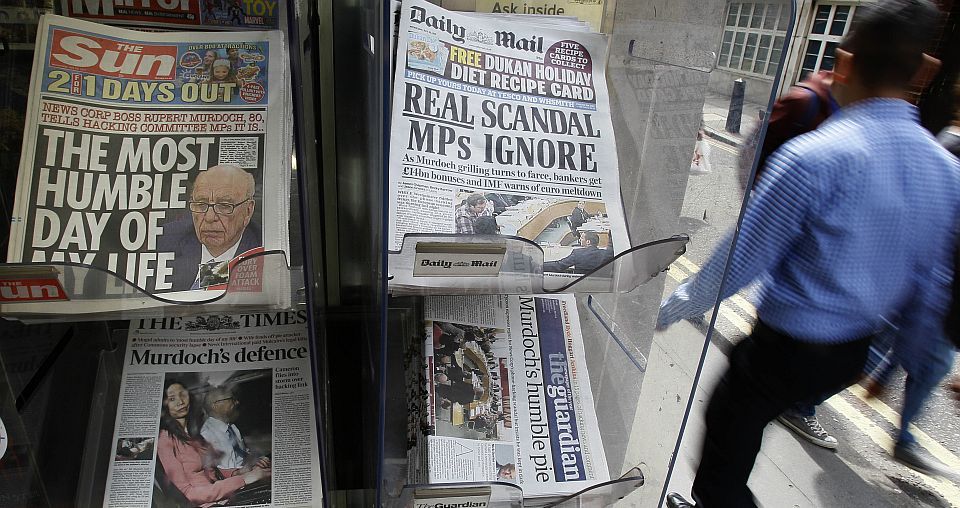 But in fact that wouldn’t be fair. Because our supposedly liberal-minded politicians, media and lobbyists did not ‘do nothing’ as the police targeted the tabloid press. No, they were far worse than that. They encouraged the authorities to take firmer and more wide-sweeping action against the popular press, using the phone-hacking scandal at the News of the World as the pretext. They even pressed the police to use the full force of the ‘national security’ Regulation of Investigatory Powers Act (RIPA) to pursue the Murdoch press and tabloid journalists.

Now these same public figures are apparently up in arms about the Met’s use of RIPA secretly to hack into journalists’ phone records, protesting that these are the methods of a police state. If so, it is a police state that was armed and invited to curtail press freedom by our illiberal liberals.

We now know that the Metropolitan Police hacked into the phone records of the Mail on Sunday, and trawled through thousands of calls made from that paper’s news desk. The secret police did it in order to track down the confidential source of a big MoS story, about Lib Dem cabinet minister Chris Huhne getting his then wife Vicky Pryce to take the blame for his speeding offences.

These revelations follow hard on the heels of the Met’s admission that it hacked the phone records of the Sun news desk and its political editor, in order to hunt down and sack the officers who gave the paper the ‘Plebgate’ story about Tory cabinet minister Andrew Davies – even though prosecutors admitted that the whistleblowers had committed no crime and had acted in the ‘public interest’.

That Sun case confirmed, as we said on spiked, that phone-hacking is officially deemed neither a crime nor a scandal, so long as it’s the secret police hacking the Sun. The MoS hacking case shows how the Met have gone further still.

To hack the Sun, the Met got around the legal niceties of the Police and Criminal Evidence Act (PACE), which involve a tiresome process of asking a judge for permission to access phone records, dealing with the other side’s lawyers, and probably having to accept the protection of the journalist’s confidential sources. To short-circuit all that nonsense, the Met ignored PACE and went straight in with RIPA, which allows them secretly to access phone records and identify sources simply with the legal ‘authorisation’ of a police superintendent. So that’s all right then.

In the case of the Mail on Sunday, however, the Met made the mistake of going through the PACE procedures. The judge agreed to grant them access to the call records, but ruled that the name of the source must be ‘redacted’ – blacked out – from the documents. Police ignored that caution, moved the goalposts, and used RIPA secretly to trawl through thousands of journalists’ calls and identify the MoS source. Britain’s secret police insist that this was all legal (if not entirely above board). No doubt the Stasi could have said much the same thing.

These revelations have unsurprisingly scandalised prominent liberal-minded politicians, media people, and civil-rights lobbyists. Yet they should hardly be surprised. After all, it was these same spokespersons for our liberal elite, filled with fear and loathing of the popular press and the populace it appeals to, who demanded that the state crack down on tabloid journalism in the wake of the News of the World phone-hacking scandal. Are they really naive enough to imagine that the police would only accept and act upon their invitation like gentlemen? Pigs might fly first.

Leading Labour MP Keith Vaz now protests that the police phone-hackers have ‘struck a serious blow against press freedom’. Noble words. Could this be the same Vaz who, as chairman of the influential Home Affairs Select Committee of MPs, lambasted the Met from 2011 onwards for ‘not doing enough’ to crack down on the excesses of tabloid journalism? Indeed it could.

Elsewhere the Liberal Democrat conference has adopted a policy of reforming RIPA and other laws to restrain police action against the press and ‘protect responsible journalism’. This apparently liberalising motion was drafted and pushed by the former Lib Dem MP Evan Harris, now the parliamentary lobbyist for the tabloid-bashing Hacked Off campaign and PR suck-up for Hugh Grant and Steve Coogan. Having championed the authorities’ crackdown on the ‘irresponsible’ popular press, Harris and Co. seemingly worry that the Met might act against the sort of well-behaved journalism of which they approve.

Perhaps as bizarrely, Guardian editor Alan Rusbridger and his star writer Nick Davies have also complained about the police attacks on tabloid journalists’ sources. Davies, who led the crusade to expose and punish hacking at the NotW, says that the police have ‘cheated’ by using the RIPA to hack phone records. It’s just not cricket, you chaps!

Yet as Davies makes clear in his recent self-congratulatory tome, Hack Attack, his role throughout the phone-hacking scandal was to act, as my review on spiked put it, ‘as the Provisional Wing of the Metropolitan Police, urging them to crack down harder on the Murdoch papers and informing the Met that a stricter interpretation of the Regulation of Investigatory Powers Act (RIPA) would enable them to arrest more members of the press. Which seems a novel interpretation of the journalist’s role of “speaking truth to power”.’ Having eventually accepted the lead that he offered them, Davies of the Guardian now appears surprised that the Met have gone even further than he suggested in using RIPA to treat tabloid journalists like jihadists.

Meanwhile Liberty, the UK human rights lobby, has expressed half-hearted support for the ‘Save Our Sources’ campaign launched by Press Gazette in response to the Met hacking revelations. This might be more convincing but for the fact that Ms Liberty herself, Shami Chakrabarti, sat as a handpicked panellist alongside Lord Justice Leveson throughout his inquiry into the ‘culture, practices and ethics’ of the UK press.

It was the Leveson Inquiry, a showtrial in which the tabloids were found guilty before proceedings began, that gave the green light for the state to launch its war on the press, rounding up 63 tabloid journalists, many of whom are still facing the threat of legal action years later. Yet all of the alleged liberals who worshipped at the feet of their good lord justice Leveson, and demanded that the police and courts take action against that ‘different breed’ known as tabloid journalists, now protest that the authorities have taken up their invitation with such gusto by hacking in search of sources.

As Sun editor David Dinsmore puts it, in an interview to be published shortly on our Free Speech Now! site, their attitude brings to mind Michael Caine’s famous admonition that, ‘You were only supposed to blow the bloody doors off!’.

The lesson of all of this is not that the Met has gone ‘too far’ or ‘cheated’ in its use of RIPA. It is that press freedom is an indivisible liberty that we defend for all or none at all. You cannot pick and choose which bits of the media you want to be ‘free’. And that in practice the state will only ever ‘support’ a free press in the same way that a rope supports a hanging man. No agency of the state, from the police to parliament, the courts to a judge-led inquiry, can be trusted to protect the freedom of the expression and of the press that is the lifeblood of a civilised society.

Despite the best efforts of the secret Met hackers on his behalf, Huhne and his ex-wife were both eventually jailed for their attempt to pervert justice. On his release, the former Lib Dem minister moved into a column at the Guardian, where he took the liberty to blame his downfall on… an anti-democracy conspiracy by the Murdoch press and the Mail group. Wherever could the police have got the idea that it was all right to treat the tabloids like terror groups?

Get your free tickets to Free Speech Now!’s Washington DC event, Press freedom in the twenty first century, on 5 November.