Miners, gays and the death of the left 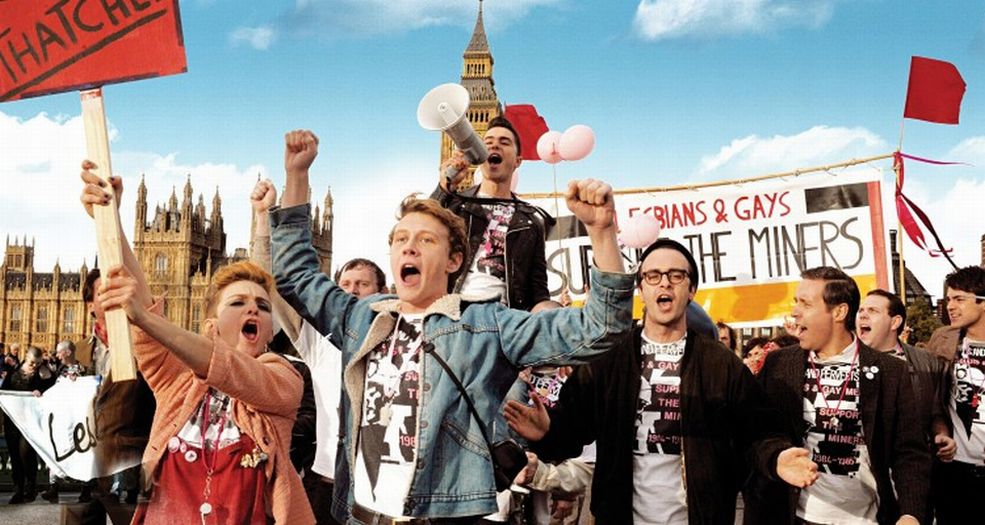 You can tell a lot about a film by the trailers which precede it. Going on the Colin Firth, David Tennant and Billy Connolly vehicles that were advertised before Pride lit up the screen, it’s clear Matthew Warchus’ cinematic debut slips nicely into the ‘Radio 4 crowd’ bracket.

Pride tells of the little-known alliance between London gay-rights activists and a small mining town in South Wales. Seeing a parallel between the day-to-day raids on the Soho gay scene and the brutal treatment of miners on the pickets, the swaggering Mark Ashton (Ben Schnetzer) gathers together a group of his friends and starts collecting money to help the miners in their struggle under the banner of Lesbians and Gays Support the Miners (LGSM). Connecting with the mining town of Dulais, they quickly forge lasting friendships with the townspeople, sharing solidarity, funds and an insight into each others’ worlds.

Joining the ranks of Billy Elliot and Brassed Off, Pride is one of a strange procession of Brit flicks that seems to suggest the entire miners’ strike was a carefully planned exercise in working-class self-improvement. But instead of ballet or classical music providing a conduit through which the gruff lower orders can learn to lighten up and express themselves, this is a story of overcoming one’s prejudices. The solidarity between LGSM and the miners is presented not as welcome support in a time of intensifying class war, but as an opportunity to grow – to learn from one another.

Outside of the odd exclamation of ‘Fuck Thatcher’, the entire struggle of the miners – or of the gay community, for that matter – is cleansed of any of its political content. Despite charting the eventual collapse of the strikes and the entire British Labour movement, it all ends on a strangely jubilant note. Sure, Thatcher won. Sure, the left was crushed. But, hey, at least the rugby boys have learned to dance and the gay lads have gotten over their bullied-kid hang-ups!

If there is a redeeming feature to Pride, it is the unwitting way it depicts the beginning of the British left’s eventual, drawn-out degradation, the process by which universalism gave way to identity politics. In the final scene, in a last-ditch tug at your heartstrings, the Welsh miners show up to join LGSM on the 1985 Gay Pride march. Having been told by the organisers of the march that there will be no politics, just ‘celebration’, the gay campaigners are delighted to be joined by their tweedy comrades and their proud Socialist banners. But at this point, it’s all too clear that the damage has already been done – politics is already withering.

After the collapse of the Miners’ Strike and the withering of the gay-liberation movement in the Eighties, Britain’s left became a broader, but more divided church. The politics in Pride reflects the point at which politics stopped being a means of transcending petty divides and rather became a means of reinforcing them, marking out one group from another and demanding we respect our differences and protect our individual interests, communities and identities, rather than celebrate our common goals and humanity.

Today, the left’s patronising obsession with welfare, with keeping working-class communities on state-funded life-support rather than creating the conditions through which they might improve their lot, attests to this degradation. Meanwhile, the gay-rights movement, with its posturing against the bigoted backwaters of Russia or the uptight Home Counties, speaks to the way in which owning one’s marginal status has become more important than overcoming it in political terms.

As Pride draws to a close, Billy Bragg’s foghorn tones play out over the credits and the miners and the gays bop along Westminster Bridge hand-in-hand, you don’t know whether to laugh or cry.