A look back at the fateful happenings in St Peter's Field 195 years ago. 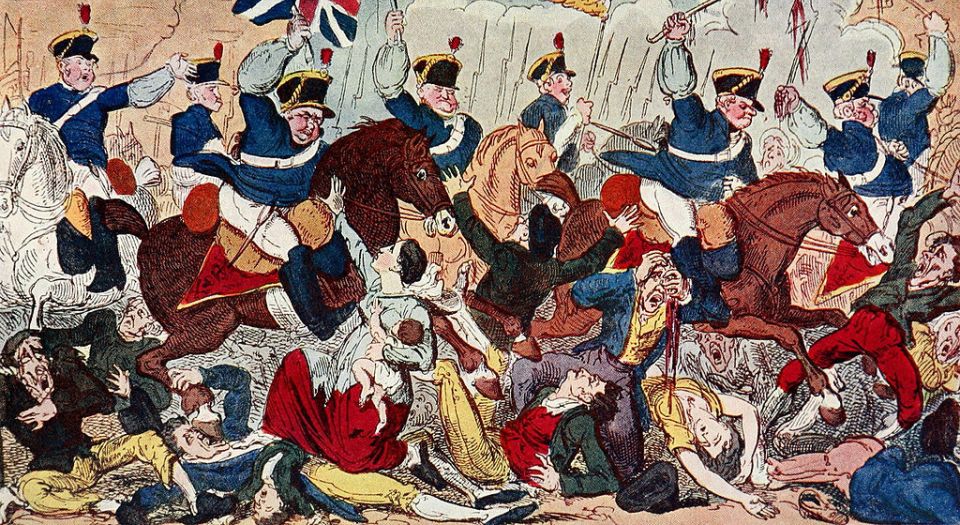 The rotten borough of Dunwich in Suffolk gained notoriety in Blackadder the Third when its most notable voters were ‘a dachshund named Colin and a small hen in its late forties’. In the early 1800s, Dunwich was practically under the sea and had only 32 registered voters. Similarly, Old Sarum in Wiltshire was a desolate district with only one voter. Manchester, on the other hand, was a thriving city, with a population of 100,000, on the cusp of leading Britain into the industrial age. What did these three places have in common? Their parliamentary representation consisted of two MPs each.

The Manchester Patriotic Union Society (PUS) had been agitating for reform and its support had swelled due to the harsh economic conditions of the post-Napoleonic age. The Corn Laws of 1815 forbade the import of cheap grain from other countries in order to protect British producers. This resulted in a fixed high price of food at a time of severe shortages. To make matters worse, the wages of agricultural workers had fallen to one third of what they had been 10 years earlier.

To address these urgent issues, a protest meeting was arranged for 16 August 1819 in St Peter’s Field, Manchester, with an expected crowd of at least 80,000. The leaders were conscious of the somewhat negative reputation reformers had in the press, and instructions were given to all participants to promote ‘cleanliness, sobriety, order and peace’ and there was also a ‘prohibition of all weapons of offence or defence’.

However, only days before the meeting, a government spy intercepted a PUS invitation to Henry ‘The Orator’ Hunt to address the meeting, which said that the economic and social situation of the people of north-west England was so desperate that ‘nothing but the greatest exertions can prevent an insurrection’. The government reaction was swift; the military was summoned, which consisting of 600 men from the 15th Hussars, two six-pounder guns, cavalry and a locally recruited militia, which bizarrely included a sizeable number of publicans infuriated that the throats of the reformers would remain dry on the day. The reaction showed that the decision-makers in the government, most of whom had stark memories of the French Revolution in 1789, were unable to differentiate between revolution and reform.

On the warm and clear summer’s day at St Peter’s Field, the sober reformers, donning their Sunday best, arrived in great numbers from surrounding areas such as Oldham, Rochdale and Stockport. They carried banners proclaiming ‘No Corn Laws’ and ‘Annual Parliaments’. At midday, the military formed a corridor through the crowd, which led to the hustings upon which Hunt would address the meeting. On his arrival, the crowd burst into enthusiastic cheers and whoops of joy.

But the magistrate William Hulton, who was in charge of the government forces, smelt only the whiff of revolt and decided to strike. Immediate warrants for the arrest of Hunt and the other leaders were issued, and confused instructions were passed to the army to intervene. Swords drawn, the cavalry charged to the hustings while hacking at the crowd around them. Meanwhile, the infantry, complete with fixed bayonets, charged headlong into the pandemonium. After 10 minutes of chaos, the entire field was cleared in a storm of violence, save for the bloodied victims and those tending to them. Within 15 minutes of Hunt’s arrival the massacre was over. Sources differ on the number of casualties on the day, but it is believed that there were between 400 and 700 injured and between 11 and 18 dead.

In the immediate aftermath, the Prince Regent and government commended the action of the military and concluded that every meeting for radical reform was now an act of treason, punishable by death. However, privately the Lord Chancellor, Earl Eldon, condemned the action at St Peter’s Field and questioned whether a crowd could as one commit an act of treason. Following his brutal arrest, Hunt was convicted of a misdemeanour and sentenced to two years in prison.

Before the year was out the government passed the ‘Six Acts’, which included the banning of meetings with over 50 people (unless they were concerning church or state matters) and also made the training of how to fire a weapon punishable by transportation to Australia.

The legacy of what became known as the Peterloo Massacre, an ironic reference to the battle of Waterloo in 1815, was great. The draconian ‘Six Acts’ only served to spur on a national desire for change, and within five years all the acts had been repealed. In 1832, the Reform Act ended the practice of rotten boroughs and introduced sweeping parliamentary reform. In addition, the creation of the Metropolitan Police in 1829 resulted in a professional civilian body which could control crowds without, for the most part, resorting to crushing violence. Perhaps most crucially, the government came to realise that acts of repression would only encourage the violent ‘mobs’ it so feared. Reform, not repression, was to be the way forward.

Paddy McKeating is a history teacher based in London.