Dying for a purpose

The absence of meaning in modern war has made combat losses hard to bear. 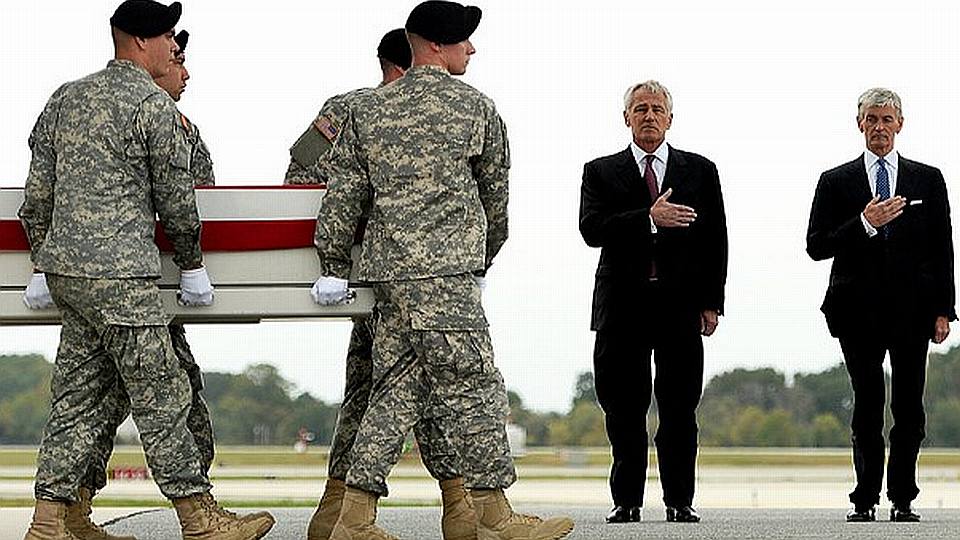 ‘If I should die, think only this of me: That there’s some corner of a foreign field that is forever England.’
‘The Soldier’ (1914), by Rupert Brooke

For almost 300 years, the British Army left its fallen where they fell, as had almost all armies before it. It was only after the Falklands campaign of 1982 that a significant number of bodies were first repatriated – at the behest initially of just one family – and even then, discretely, for fear of demoralising the public and those still serving.

In his latest work, historian Steven Casey of the London School of Economics explores America’s treatment of war losses during the twentieth century. In his telling, officials and politicians will always be caught between a rock and a hard place when it comes to dead soldiers. To underreport or not to attend to the return of the dead is viewed as an attempt to conceal the harsh realities of war from the public, as well as being seen as insensitive. But, at the same time, high-profile send-offs of the dead can be seen as self-serving.

Fundamentally, Casey sets out to explode the mantra established by US political scientist, John Mueller, who, during the Vietnam War in 1973, asserted that ‘as casualties mount, support decreases’. Casey’s effective retort – ‘not always’ – is unconvincing, as he fails to draw out why support doesn’t always decrease as casualties mount.

Nevertheless, When Soldiers Fall, presented cogently and chronologically, provides plenty of useful material to allow readers to draw their own conclusions. Primary among these is the growing inability of governments to project purpose outside of war, let alone through it. To ‘die for a lie’ in Iraq, for example, is considerably worse than to ‘die for a tie’ in Korea.

It is this changing ideological context that provides the backdrop to a story that opens with a relatively small and inexperienced (by European standards) US War Department in 1917 – the general staff consisted of just 20 officers – that evolved into the mightiest military on Earth just half a century later.

It is a period of undeniably rapid technological change – not least in reportage, from newsprint through radio and television, to today’s live-streaming internet coverage, which now escapes the control of a once powerful few. But technology alone does not determine outcomes, as the advocates of ‘technowar’ – from air power to smart bombs – were to discover.

Rather, Clausewitz’s dictum that war is ‘the continuation of politics by other means’, affected by domestic ‘friction’ and conceptual ‘fog’, might be a better place to start. Winning a war relies on the buy-in of the military (just as much as of the public), rather than just a nation’s technical superiority over the enemy. Spirit can matter more than kit.

Admittedly, mundane elements do affect the treatment of fatalities and casualties. Not least, as Casey examines, how to count the dead and the wounded. Losing a battle does not create a situation conducive to conducting elaborate or accurate body counts. Equally, defining serious injury is a moving feast, complicated when casualties are treated (increasingly well and quickly) and returned to the front.

No doubt, there will always be challenges involved in the treatment of the dead. But these will not be resolved through better communications or PR strategies. It is the political dimension that will prevail.

From the war to end all wars and its reprise after Pearl Harbour, through Korea and Vietnam, to Afghanistan and Iraq (with the odd foray into Somalia and elsewhere excluded), Casey identifies the painstaking lengths to which the US military went to identify and count fatalities and casualties, as well as its deliberations over how and when to present these to the public.

Implicitly, this is a story about US rulers’ changing views of the public – from partners who could be trusted to share the same values and outlooks, to concern as to how best to keep the masses on side. But, as Frank Furedi has identified, experiencing problems as relating to trust psychologises the real driver – a crisis of authority.

Casey recognises that the domestic front was always hungry ‘not only for news… but also for analyses’, effectively conceding that making sense of conflict can matter just as much as numbers. Readers will have to look elsewhere to understand this gradual inability to imbue war with any meaning across the twentieth century. It is this that matters more than Mueller’s casualties.

It is why, as Casey correctly identifies, by the time of Vietnam, many in the military, just as much as in the media, had become uncomfortable with the language of death. GIs were never killed; ‘they were aced or greased, waxed or zapped’. But if the military itself used terms such as ‘wasted’, what did this say about its belief in the mission?

Along the way Casey does make some fine observations – not least regarding how in 1917, 1941 and 1950 the United States had gone to war with a segregated army. Unhappy that their role had been diminished and portrayed as one of support or lacking combat capability, many black voices demanded the ‘right to fight’, with tragic consequences in Vietnam. Casey cites Senator George McGovern who, in the aftermath of his 1972 presidential election defeat to Richard Nixon, ruefully observed: ‘When the corpses changed colour, American interest diminished’ – a sad indictment of the anti-war movement, which was more preoccupied with the shooting, by Ohio national guardsmen, of unarmed college students at Kent State University in 1970.

Another sorry truth is that, both in terms of fatalities and casualties, American losses during the Second World War amounted to more than twice those from all its other conflicts in the twentieth century put together. This prompted the US authorities to focus on promoting objectives rather than identifying losses which, as Casey notes, there was hardly time to audit and report anyway.

In his wry essay ‘The Gulf War did not take place’, French philosopher Jean Baudrillard highlighted quite how ‘safe’ America’s wars subsequently became. Mistakenly, Casey sees the lower death toll as a reason why personal narratives now receive far greater prominence. But the media’s focus on emotion represents a retreat from political debate.

Most significantly, as I have argued elsewhere, values such as honour, duty and glory appear entirely anachronistic in an age when they have lost their use and meaning. When the necessity to fight – even for ideas – is dismissed, and attempts to impart a vision or direction discredited, then the game is up, and worse – destructive dissent is to be expected.

One consequence of conflicts’ loss of meaning has been the increased focus on technical processes such as auditing and communicating casualties, instead of clarifying a purpose. Yet societies possessed of a sense of mission – however misguided – have been able to countenance and withstand the most remarkable forms of barbarity, without first having to prioritise force protection.

Casey usefully reminds us that it was the Republican Party that opposed all of America’s major twentieth-century wars (two world wars, Korea and Vietnam). But his view that ‘in any war, faced with an information vacuum, the press and public tend to speculate’ confuses things. After all, the prevalence of rumours is also a measure of political confusion.

Before losing his life, Rupert Brooke continued the poem that opens this review: ‘There shall be in that rich earth a richer dust concealed; a dust whom England bore, shaped, made aware.’ Brooke’s soldier believed in something that gave his life, indeed, his death, a meaning. It is this loss of meaning that makes combat losses so hard to bear today – not just the absolute numbers.

Professor Bill Durodié is head of the conflict analysis and management programs at Royal Roads – Canada’s University for Working Professionals.

When Soldiers Fall: How Americans Have Confronted Combat Losses from World War I to Afghanistan, by Steven Casey, is published by Oxford University Press. (Buy this book from Amazon(UK).)