The Third Man: wild about Harry 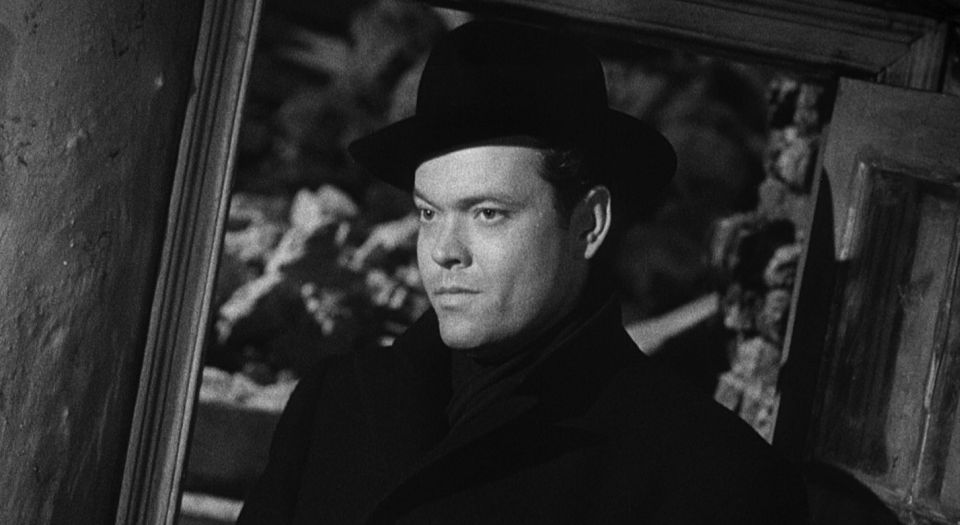 The Third Man was a hit with the critics and at the box office. It picked up a Bafta, the Grand Prix at Cannes, and in 1999 the British Film Institute (BFI) voted it the British film of the century. It became a salient part of the culture, complete with a tune you couldn’t forget. You probably couldn’t make a film like it today; it has, after all, no vampires, zombies, superheroes, aliens, robots or hobbits. The love aspect isn’t romcom frothy, but bitter as the cud. It’s the buddy movie from hell with no Hollywood ending.

The film begins with Western pulp writer Holly Martins (Joseph Cotton) arriving broke in Allied-occupied Vienna to meet his old pal Harry Lime (Orson Welles), only to find Harry has been killed in a car accident. When British policeman Major Calloway (Trevor Howard) tells him Lime was a notorious racketeer, Holly is determined to clear his friend’s name. But questioning Harry’s seedy associates and Anna Schmidt (Alida Valli), Lime’s inconsolable lover, Holly is baffled that their stories fail to corroborate. This leads him on a quest through the half-ruined city to seek the unidentified ‘third man’ at the scene of Harry’s accident.

The looming shadows and canted framing tell of a world off-kilter, morally skewed. Dr Lynne Hibberd, lecturer in media studies at Leeds Metropolitan University and author of a study guide to the film, says this aesthetic is classic noir, with its roots in central European expressionism. And it has the ennui associated with the noir sensibility, the what-the-hell attitude towards being alive. But, as Lynne Hibberd points out, there’s no femme fatale in The Third Man, no spider woman waiting to sink in her fangs; just poor Anna in her bombed-out apartment crying herself to sleep in Harry’s pyjamas.

The soundtrack, a product of pure chance, had an impact well beyond the world of the film. Reed was already shooting in Vienna before he had any idea what music would be right. Then, in a wine bar, he heard Anton Karas playing the zither for tips, and the rest, as they say, is history. Karas sold half a million in the UK in 1949 and topped the Billboard chart in the US for 11 weeks when the film opened. It’s bright but sinister, jaunty but edgy; Pulitzer Prize-winning film critic Roger Ebert said it had the air of a man whistling in the dark. ‘Has there ever’, he asked, ‘been a film where the music more perfectly suited the action?’.

Audiences in 1949 didn’t see the film as fanciful. Vienna may have been badly bombed, but so had Coventry, London and Liverpool. Crime was a UK problem, too. Shortages and rationing meant plenty of people knew a man who could get a hold of extra petrol, sugar or meat. Fellas like Lime had their stories in the papers and their pictures on post-office walls.

Joseph Cotten, in fine everyman form as Holly Martins, pairs up nicely opposite Welles and Alida Valli. Major Calloway and Sergeant Paine (Bernard Lee, the original M to Connery’s Bond) provide the moral counterbalance to Lime and his gang, all soldierly good sense and decency. It’s one of the few films where the extras are never superfluous: real potato- and boot-faced people pop up everywhere, their features telling you at a glance about the city’s moral and physical decline.

Then there’s Lime. Co-producer David O Selznick wanted Noel Coward for the part, but Reed was convinced that Orson Welles, with his charisma and chutzpah, was Harry Lime to the bone. Welles even bypassed Graham Greene’s script to write some of his own lines, including the infamous apologia for racketeering: ‘Like the fella says, in Italy for 30 years under the Borgias they had warfare, terror, murder, and bloodshed, but they produced Michelangelo, Leonardo da Vinci, and the Renaissance. In Switzerland they had brotherly love – they had 500 years of democracy and peace, and what did that produce? The cuckoo clock.’

Lynne Hibberd says that this is maybe the key to the film’s ideology: all the badness of the world can always be shrugged off, excused. There really are no happy endings, so why bother looking for them? They had, after all, just been through the most savage war in history. ‘Death’s at the bottom of everything’, says Calloway. And nobody argues with him.

The public warmed to Lime, couldn’t get enough of him. Even after Holly shoots him dead in the Viennese sewers, the character still wouldn’t lie down. Welles returned in a radio prequel, The Adventures of Harry Lime (1951). And Michael Rennie later starred in a TV show, The Third Man, which aired until 1965. For Rennie’s incarnation, Lime became a jet-setting tycoon, playboy and private investigator. In the swinging Sixties, Harry Lime, his evil deeds behind him, was one of the good guys.

The Third Man lives on, not only in film history, but also in the lexicon. In October 1955, foreign secretary Harold Macmillan, ever-ready with a good soundbite and happy to reference a popular film, stated Kim Philby was categorically not the ‘third man’ of the Cambridge Soviet spy ring. But Macmillan was wrong. And in more ways than one. Not only was Philby a stellar traitor, he had worked in Vienna in the Thirties, where he married the dedicated revolutionary Litzi Friedmann, who probably recruited him to the NKVD. Then, at MI6 in the Second World War, Philby was the boss and close friend of one Graham Greene. Kim was a nickname. Philby’s first name was Harold.

Gerald Heys is a writer based in Gloucestershire.