June marks the anniversary of the 1798 rebellion in Ireland – we remember one of its forgotten heroes. 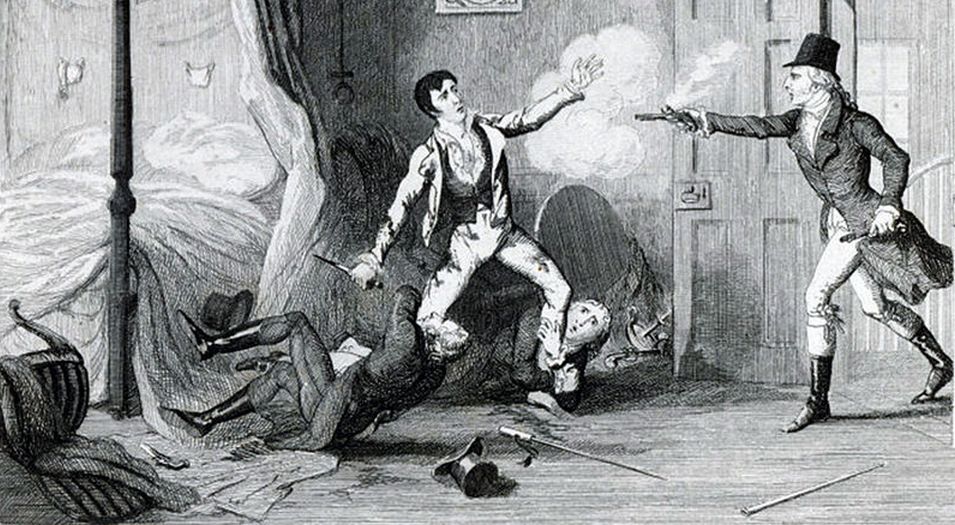 In the popular consciousness, the founding fathers of Irish republicanism are Theobald Wolfe Tone and Robert Emmet. Their renown has allowed one of the more intriguing figures in Irish history to remain neglected. He was a one-time British army officer, member of parliament, honorary chief of the Iroquois, and rumoured son-in-law of French aristocrat turned revolutionary, Philippe Égalité; he was Lord Edward FitzGerald.

On the first page of his new book on the intellectual history of the French Revolution, Jonathan Israel sets the scene of a dinner in May 1792 at the Hotel du White, the hub of Anglophone republicanism in Paris. Holding court, as usual, was Thomas Paine, who has soon to be given the portfolio of Irish affairs in the French government. FitzGerald was also present at the dinner and he proffered a toast to the abolishment of hereditary titles and tyrannical governments everywhere. Rooming with Paine, where they ‘dined and sup’ed together daily’, he signed his letters ‘Citoyen Edouard FitzGerald’ and dated them ‘First year of the Republic’. The toast at White’s had been reported in the London papers, and Citoyen Edouard was promptly cashiered out of the British Army, having held the rank of major for nearly a decade.

Being a younger son of the premier peer of Ireland, FitzGerald seemed destined for a career in the military. Had he jumped through the conventional hoops, FitzGerald may have had a distinguished career in the army; as his contemporary and fellow son of an Irish peer, Arthur Wellesley, the Duke of Wellington, demonstrated. He served in the crown’s forces in the American war for independence, and went on to serve in the Caribbean. However, there was always something of a rebel in FitzGerald. During his early parliamentary career, which began with a pocket borough at the age of 20, FitzGerald sat with the Irish Patriot Party. Although FitzGerald was comfortable whether he was in an army camp or a townhouse in London, he had an affinity with life at the rough end. While he was posted to command a fort on the frontiers of the Canadian wilderness, he wrote ‘Here, men are what they make of themselves’. After having slept under the stars for two months during an incredible trek overland to Quebec in the height of winter, FitzGerald, in a pique of absurdity, ventured that he would never live in a house again.

Reaching Montreal by the spring of 1789, FitzGerald elected to return home via New Orleans, a canoe journey that sent him beyond the reaches of European civilisation into the upper Great Lakes and down the Mississippi. Making his way along the rivers of south-western Ontario, FitzGerald came across Joseph Brant, a Mohawk chief who had led his forces in support of the British crown during the Revolutionary War. Brant showed FitzGerald a snuff box, given to him on his visit to London by Charles James Fox. As chance would have it, Fox was FitzGerald’s cousin, and he and Brant decided to travel on together to Detroit. Once there, Brant gave FitzGerald the name ‘Egnidal, a chief of the Bear tribe’ in a ceremony.

FitzGerald’s attachment to living a harsher way of life can be traced back to his childhood studies of Rousseau. His mother, the Duchess of Leinster, even wrote to the eminent philosopher personally, with an offer to tutor her children in the manner of Rousseau’s tract on education, Emile. FitzGerald was raised at a time when the rationality of the Enlightenment was melding with the passion of the Romantic age, and his education reflected this. The idea of ‘fellow-feeling’, as espoused by the Scottish school of Francis Hutcheson and Adam Smith, was juxtaposed with Latin recitals and Euclidean geometry.

When FitzGerald returned to Ireland in 1793, with his French wife Pamela, he was a vigorous advocate of the principles of the French Revolution. Returning to his place in the Irish House of Commons, now representing County Kildare, FitzGerald gave a rousing, and, allegedly, intoxicated speech in favour of Catholic enfranchisement. FitzGerald, with his short-cropped ‘republican’ hairstyle, flashy emerald-green necktie, and elegant continental wife, was regarded as a burgeoning power broker in the Irish radical movement.

Ireland seemed to be moving ever closer to revolution. War with France ground parliamentary reform to a halt, and Ireland’s biggest republican organisation, the Society of United Irishmen, was outlawed. FitzGerald and fellow parliamentary radical Arthur O’Connor travelled to the free port of Hamburg to secure arms from the French government. They were tracked all the way there, showing the two men may have been better suited to politics than being secret agents. The leaders of the Society of United Irishmen became scattered: they were either in exile, Paris, or, increasingly, prison. FitzGerald became the National Executive of the United Irishmen, but the organisation was betrayed by an informer in March 1798.

FitzGerald escaped arrest by dint of being late to a meeting. Shuffling from one Dublin safehouse to another, with a £1,000 bounty on his head, FitzGerald was named commanding general of the United Irish forces. In papers, later confiscated by the crown, FitzGerald estimated the United Irish strength at 280,000. His plan was to assemble the forces from Dublin and neighbouring counties on the post roads out of the capital, with the aim of marching on and holding the city. Meanwhile, strategically placed flare-ups in the countryside and smaller towns would keep the regular army and government militia isolated and spread too thin to defend themselves.

This was never to be. FitzGerald was discovered only a few days before the uprising was due to begin on 23 May 1798. Three army officers burst into the attic room where he was hiding. FitzGerald mortally wounded one of the officers before being shot in the shoulder. Incarcerated in Dublin’s Newgate Gaol, he was kept isolated from the other United Irish prisoners.

To avoid the embarrassment of bringing a congenial aristocrat to trial for treason and murder, FitzGerald’s bullet wound was left untreated in prison, and septicaemia set in. He died, delirious, in Newgate Gaol, on 4 June 1798, aged 34.

David Muncaster is a PhD student in Irish history at King’s College London.