The left is over? I hate to say I told you so

A left-wing writer has finally cottoned on to the decline of the labour movement – but his proposals for a revival are deluded. 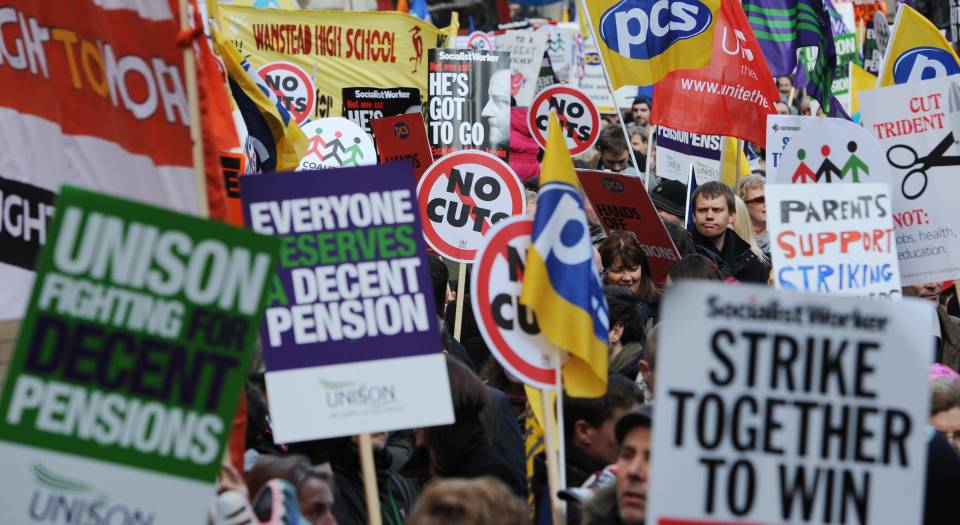 ‘Five years of glorious failure’ is how Richard Seymour sums up a left that fails to ‘get its shit together’, and whose actions are ‘irrelevant’, in his new book Against Austerity, which is ‘about a historical missed opportunity’. Not just the left but the working class has failed in its response to the coalition government’s austerity drive, he says. ‘The relative passivity, in contrast to previous offensives, has been striking.’ The union protests were ‘quite an anti-climax considering the warnings of a “winter of discontent”’. Even those initial protests gave way, so that ‘the days lost to strikes the following year fell to an historically low level of just 250,000’.

Seymour calls this pessimistic realism his ‘bad news gospel’, which he is giving around the country to educate people to ‘soberly face our situation’.

But to whom, exactly, is it news that the left and the labour movement have failed? How is this news? Where are these great illusions in the power of the trade unions today?

Not among the readers of spiked, for one. spiked took its inspiration from the problems posed in 1990, by Frank Furedi, in his analysis ‘Midnight in the century’, published in Living Marxism. There, Furedi wrote that ‘for the first time this century there is no real sense of a working-class movement with a distinctive political identity anywhere in the world’. Moreover, ‘the left, as a force that represents something in society, no longer exists’. This analysis was reproduced by spiked two years ago, because its fundamental points still hold true.

Furedi’s analysis was striking for its time, but since then many social scientists have noted the decline in the organised working class, and its connection to the failed project of the left, from the late Peter Mair (whose excellent Ruling the Void has just been published by Verso) to Anthony Giddens and Gopal Balakrishnan. Eric Hobsbawm’s essay The Forward March of Labour Halted was published in 1983. On what planet would you be living not to know this?

For years, the Trotskyist academic Seymour has been dreaming that the horny-handed sons of toil would rise up and sweep away neoliberalism and all its works. In 2006 he was excited that ‘the unions have elected a wave of radical leaderships and waged sometimes successful defensive and aggressive strikes’. The following year he saw ‘a growing rebellion by workers across the country’. He poo-pooed those who ‘throughout the 1990s… constantly assured us that the class war was over, no longer mattered’. In 2008 he thought there was ‘something bigger percolating away here’, ‘not just a manifestation of reviving industrial militancy in the most unionised sectors of the economy’, something more widespread. And in 2010, ‘the first signs of industrial resistance are being seen in the capital’, he said.

In March 2011, a protest called by the Trades Union Congress (TUC) against spending cuts sent Seymour into quiet ecstasy: ‘It was something that I haven’t really seen en masse before. It was something that some people had written off… It was the working class. It was the working class as an agent of its own interests; it was a class for itself. It was the labour movement, every bit the multicultural entity that Cameron reviles. And that movement, comprising several millions of people, having lain dormant for years, is now looking decidedly up for a fight.’

Writers for spiked were not so convinced. ‘Those comparing the unions’ campaign to the Winter of Discontent or the poll tax protests are living in the past, or cloud cuckoo land’, wrote Mick Hume on 15 September 2010. And after the TUC demo, ‘despite the ravages of the recession and the high levels of discontent among the workforce’, wrote Hume, ‘we are living through an era of almost-unprecedented industrial peace’.

The real target of Seymour’s sober pessimism, then, is himself, and the illusions that he and his friends had in the idea that the Lib-Con coalition government’s austerity programme would provoke a mass working-class revolt. As such hopes evaporated, Seymour’s fantasies of insurrection even alighted on the summer looting spree of 2011. ‘The intention has been to show that the party of order can keep control throughout the coming battles’, he wrote: ‘I hope, with every fibre in my being, that they cannot.’

The different far-left organisations that Seymour joined disintegrated when these overheated expectations failed to materialise. In Against Austerity, Seymour paints an interesting picture of the milieu he works in: ‘The fragments of the old socialist left in Britain sustain a façade of ostentatious “normality” by consuming copious amounts of alcohol and evincing an interest in sport. But get them in a room together and watch them reveal their real alien selves, as they talk about “the class” and hold forth on “the dialectic”. I know. I am one of those people.’

Now he has a new mission – to tell everyone what they already knew, that the left is of little account and the working class is in a poor state of organisation. This is not the first time that Seymour has limped along behind spiked’s analysis, having written a critique of humanitarian imperialism for Verso, The Liberal Defence of Murder, in 2008 (expect a book on free speech in universities sometime in 2020). But is there anything in Against Austerity that could lead to a different outcome for the left?

As much as Seymour is to be applauded for facing up to the left’s paralysis, his understanding of the working class’s defeats is weak. For Seymour, the working class is an objective economic category, those who do not own the means of production; and the ruling, capitalist class are those who do. He can see that the working class was led by the Labour Party throughout the twentieth century. What eludes him is that the socialist ideology was not just something laid on top of the working class, but also was the subjective identity through which the working class made itself into an objective force. The exhaustion and defeat of socialism is not contained at the ideological level, but reacts back to dissolve the class itself. Without an organising belief, the working class cannot be a material force. Seymour hopes that left-wing ideas can, through organisation and alliances, make themselves into a hegemonic idea, or a common sense to rival the ‘common sense’ of the right. Here he draws on the old ‘Eurocommunist’ ideas of Nicos Poulantzas and Stuart Hall – those who were inspired by the writings of Gramsci. He hopes that the Left Unity coalition that has gathered up some of the disappointed socialist activists will be the vehicle for that project.

But realising that the old project of the Organisation for Fighting Unions (circa 2006) is dead, Seymour hopes instead to model an opposition on the style of the Occupy movement. Less organised labour, more street activism; not so much at the point of production, more taking the city, ‘trying to stitch together an alliance of the working majority, “the 99%”, on the basis of reconciling diverse and sometimes antagonistic subject-positions’, an ‘institutional format that can accommodate and include such diverse interests’. This, though, is to draw on models of organisation that are themselves a part of the problem, not the solution. The move to Occupy the Streets was a way to gather activists as a minority who were themselves not able to win over majorities. Mixing up protest and strike, the Occupy movement was itself a symptom of the decline of organised labour, and of a growing mood of apolitical activism that filled the void. The ‘new social movements’, with their ‘sometimes antagonistic subject-positions’, which Seymour seeks to reconcile, are really just the flame-warring redoubts of the Twitter wars, that do not represent groups of any real social weight. Who wants to reconcile Trans-Exclusionary Radical Feminists and their Intersectionalist critics? None of them amount to anything, anyway.

As problematic as Seymour’s understanding of the state of the working class is, his understanding of the state of the capitalist class is worse. Though he does suggest that the ‘crisis’ of 2009 is also a crisis of the ruling class, he only really sees that in relation to some arguments between the politicians, the media and the police. What looks to him like a strategy of austerity comparable to the offensive against living standards in the early 1980s is nothing of the sort. Seymour claims that there is a ‘drastic, long-term “re-balancing” of economies away from consumption towards investment – that is, away from wages and towards profits’. It is true that the workers’ share of output has fallen back markedly, but that has not led to a growth in investment. On the contrary, levels of business investment in industry and construction have mostly been falling off.

So, too, the growing financialisation of the economy that strikes Seymour as a dominating power is in fact more of a symptom of low levels of investment, giving rise to uninvested surpluses that have in turn fed speculative asset booms. His account of the policy of austerity does acknowledge that in practice government spending has not been reduced but instead continues to grow – a fact that ought to have led to more questioning of the whole account of ‘austerity’.

Seymour’s recognition of the crisis within the working class blinds him to the fact that it is largely mirrored by a crisis in the ruling class. Just as the working-class movement was bound together by an ideal of socialism, so the ruling class was bound together by its collective struggle against the left. Without a motivating principle, the capitalist class, too, is acting a lot less like a class, and outside of the Far East has generally retreated from its historic role of developing the technical and industrial base of society.

Similarly, Seymour makes the mistake of overstating the economic dislocation of 2009. While there has certainly been a profound economic contraction in Greece and Spain, the left-wing assessment that this was the worst crisis since the 1930s was a judgment skewed by a rhetorical wish for heightened conflict and opposition.

In Against Austerity, Richard Seymour owns up that one left-wing strategy has collided with reality, but the alternatives he proposes seem no less deluded.

James Heartfield is author most recently of The European Union and the End of Politics, published by ZER0 Books. Visit his website here.

Against Austerity: How we Can Fix the Crisis they Made, by Richard Seymour, is published by Pluto Press. (Order this book from Amazon (UK).)