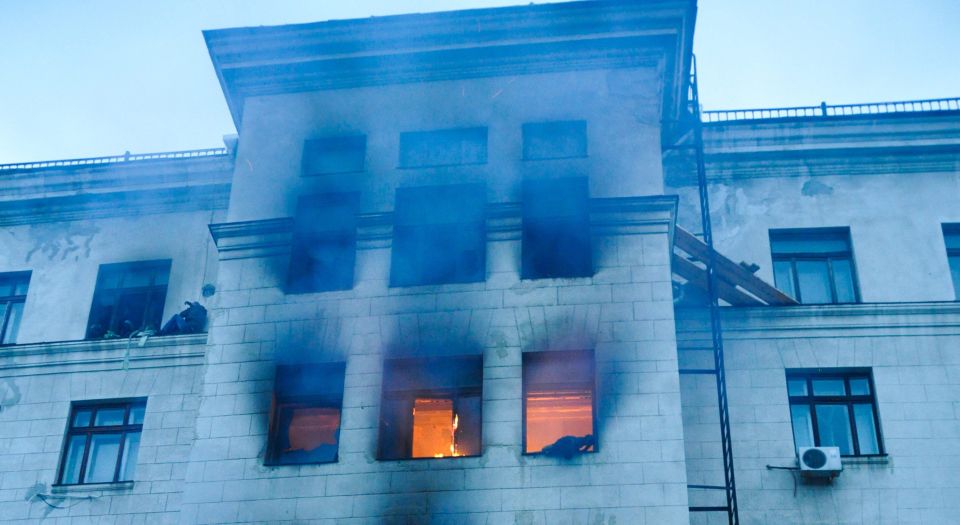 When does a gathering of protesters become a ‘mob’? When do political activists become a ‘rabble’? When does political anger become ‘hysteria’? When does the storming of government buildings by a people who feel neglected by officialdom become ‘vandalism’? When we’re talking about eastern Ukrainians. When we’re talking about the people of Odessa, Donetsk and other parts of eastern Ukraine that lean more towards Russia than they do to the new, EU-backed government in Kiev.

When, six months ago, western Ukrainians were camping out in squares in Kiev, protesting against the then president of Ukraine, Victor Yanukovich, and occupying government buildings, they were hailed by the Western media as revolutionaries, democrats, 1989-style heroes taking a stand for liberty and decency. But when eastern Ukranians have done likewise, setting up protest camps in Odessa and elsewhere to signal their disdain for the new government in Kiev, or marching to government buildings and sometimes storming them, they’ve found themselves denounced by Western observers as ‘rabble-rousers’, ‘hysterics’, ‘fanatics’, ‘vandals’. The Western coverage of Ukraine has given new meaning to the phrase double standards; it has taken the ‘journalism of attachment’ – the fashion among Western observers for childishly painting foreign conflicts as simplistic clashes between the pure and the wicked – to a new low.

The language used by the Western media to describe the political anger of eastern Ukrainians has been striking – and ugly. These protesters, unlike those in the west of Ukraine, are ‘the mob’; they are ‘balaclava-wearing men’ who are ‘vandalising and occupying government buildings’; they are driven by a ‘secessionist hysteria’; they are Putin’s puppets, cajoled by Moscow into ‘successfully disrupting’ places like Odessa.

And the Kiev government’s authoritarian urge to clamp down on these protesters, to put them back in their place as effectively subjects of a government they didn’t vote for and do not like, is described by the Western media in the most glowing terms. Where Yanukovich’s assaults on the protesters-cum-government in Kiev a few months ago were branded ‘murder’ and ‘terror’, inviting opprobrium from Obama, Merkel and pretty much every leader writer in the Western world, the new Kiev government’s heavyhandedness with eastern protesters, which has included attempts to restrict official use of their preferred language of Russian and threats to ban pro-Russian protest camps, is euphemistically described as a ‘push to quell the pro-Russian insurgency’. So, angry Ukrainians carrying out fairly similar street-based protests against authorities they feel threatened by can be either democrats or insurgents, revolutionaries or a mob, heroes or hysterics, depending on whether they’re in western Ukraine (good) or eastern Ukraine (evil), and whether their ire is aimed at government figures that were backed by Russia (this is acceptable) or at a new government installed in Kiev by Washington and Brussels (this is a crime against global peace).

The double standards of the media coverage were superbly exposed during the ‘Jews registering’ hoax in mid-April. Local Ukrainian news sites reported that the Jews of eastern Ukraine, particularly in Donetsk, were being forced to register with officialdom, in a nasty echo of some of the events of the early Nazi period. The story spread like wildfire around the Western world, being reported in major newspapers, including USA Today, and eventually evoking an angry statement from the US secretary of state, John Kerry. ‘This is not just intolerable – it’s grotesque’, he said. The only problem was that Jews in eastern Ukraine were not being cajoled into registering with the authorities. The infamous flier calling on them to register, which caused the international storm, was actually cobbled together by a small gang of anti-Semitic opportunists and handed out by ‘three masked goons hanging around a synagogue in Donetsk’. There was nothing official about it at all. Yet still the completely unfounded registering rumours were latched on to by serious Western media outlets and leading politicians as evidence that the east of Ukraine is a cesspit of prejudice and backwardness.

Contrast this to earlier revelations that the new government in Kiev that was effectively handpicked by Kerry and other Western leaders had anti-Semites in its ranks. Svoboda, a far-right party, makes up a pretty substantial part of the pro-Western government in Ukraine. It was handed authority over three government ministries when the government was installed with external backing in February. This is a party that believes Ukraine is threatened by a ‘Moscow-Jewish mafia’. One European expert on anti-Jewish prejudice says Svoboda has ‘a very anti-Semitic core in its ideology’. Yet anybody who raised criticisms of the new government in Kiev on the basis that it consisted of a hodgepodge of nationalists, oligarchs and actual anti-Semites was accused of exaggeration, of fearmongering, of being overly sensitive about Svoboda’s beliefs. Putin became the subject of widespread Western mocking when he said the new Kiev government had ‘anti-Semitic forces’ in it.

So a phoney anti-Semitic leaflet in eastern Ukraine becomes, in the space of 24 hours, hard evidence of the rottenness of that part of the world, of the wickedness lurking in the hearts of the people in that region, while any talk of anti-Semitism in the new government in western Ukraine is brushed under the carpet or laughed at as OTT. Increasingly, the Western media see only what they want to see in Ukraine – they see only mobs, hysterics and anti-Semites in the east, and only decent, democratic, prejudice-free political types in the west. That’s because they are driven, not by an objective desire to discover the messy truth about the new tensions and divisions in Ukraine, but rather by a search for anything that will bolster their pre-existing narrative in which the west is good and the east is evil and in which there is no such thing as ‘shades of grey’. Even if the thing they find to prop up their child-like narrative is a fake, an invention, still it will do as part of the pseudo-journalistic enterprise of reinventing the black-and-white Cold War on the back of falling-apart Ukraine.

The double standards of the Western media were on full display during the horrific fire in Odessa this week, in which more than 30 people perished. After pro-Russian protest camps had been set on fire, presumably by activists favourable to the government in Kiev, pro-Russian activists took refuge in Odessa’s Trade Unions House. According to the BBC they were ‘driven in’ to the building by a very large gathering of pro-Kiev protesters. It is unclear exactly how the fire started – the BBC reports eye witnesses saying Molotov cocktails were both thrown from the building, by pro-Russians, and also at the building by the pro-Kiev activists outside. The trapped pro-Russians couldn’t escape, partly because, as one eye witness told the BBC, the pro-Kiev activists outside ‘attacked them like a pack of wolves’ when they tried. And so they died, in a fire that was at the very least made worse by supporters of the Kiev government, as outside those backers of Kiev chanted anti-Russian slogans.

By any standards it was a horrendous event. How have the Western media covered it? Either they have demoted it down the headlines, or they have described the pro-Russians who perished that day as being part of a ‘mob’ who, in essence, had it coming. Some outlets have been more concerned with analysing how Putin might milk the Odessa fire, perhaps using it as evidence that ‘Ukraine’s beleaguered Russians live under daily threat’, than they have with exploring the role played by supporters of Kiev in making the pro-Russians flee their protest camps, take refuge in a building, and then face furious fires. What looks very much like a mob assault on those who dare to support Russia is being discussed in some of the media as the inevitable outcome of the truly mob-like pro-Russians’ wicked behaviour.

What we have here in the West is not journalism, but narrative-making, the squeezing of various bloody events into a predetermined script, whether they fit or not. In this script, western Ukrainians never do anything bad (even though in the real world they do); the Kiev government is a paragon of democracy (despite having shown itself to be authoritarian and anti-democratic); and eastern Ukrainians are always crass, dumb, Putin-brainwashed disrupters of the peace, even as they themselves are subjected to horrific violence. Under the journalism of attachment, where Western observers attach themselves to the side in a conflict that they consider to be ‘good’, no nuance is allowed; complexity is always airbrushed away; inconvenient facts that contradict the script are brushed aside, while hearsay or phoney documents that bolster the script are lovingly embraced and splashed across the front pages.

Fundamentally, the Western coverage of Ukraine captures the inhumanity of so-called humanitarian interventionism. This is a new view of global affairs that sees the international community – that is, well-connected Western politicians and NGOs – as having the right and the responsibility to steer unstable countries away from wickedness and into the light of decency. What we can see very clearly in Ukraine is that those of this misnamed ‘humanitarian’ mindset don’t only need good people they can rescue – they also need evil people they can posture against. Their instinctive response to every conflict on Earth is to turn it into a battle between the righteous and the rotten, meaning they must not only flatter and praise one side – they must also dehumanise the other. We’ve seen it everywhere from Bosnia in the 1990s, where the Muslims were treated as unquestionably good and Serbs were transformed into the new Nazis, to Sudan in the 2000s, where Darfurians were pure and the rulers in Khartoum were the devil incarnate. In order to survive, in order to keep alive its simplistic ideology that views all conflicts as battles between decency and darkness, the ‘humanitarian’ movement must constantly conjure up monsters, wicked foreign creatures against whom the Western chattering classes might fulminate and get a moral kick from hating. Currently, Eastern Ukrainians, pro-Russians, Russians themselves are filling that role. Burnt to death in a building? So what. You are on the bad side.

Many Western journalists like to ridicule Russia Today, claiming it is a mouthpiece for Putin. If that’s true, then it’s pretty obvious why – Putin funds it; it is paid-for government propaganda. Here’s a far more difficult thing to consider: why is the Western media being so conformist about Ukraine, unquestioningly buying Washington’s and Brussels’ moral script and accepting that the Kiev government is Good and all those obstinate local rulers in the east of Ukraine are Bad? They aren’t being paid to parrot propaganda; government officials aren’t exerting political pressure on them; yet still the Western media are remarkably samey and uncritical on Ukraine. This points to a problem that is possibly even worse than old-style official propaganda – it speaks to an organic cult of conformity in much of the Western media, where critical thinking is voluntarily sacrificed at the altar of getting a cheap thrill from being part of a mythical clash between good guys and bad guys, of a new Cold War.