The West’s double standards on Ukraine

Our leaders claim to be defending Ukrainian sovereignty. In fact, they’re overriding it. 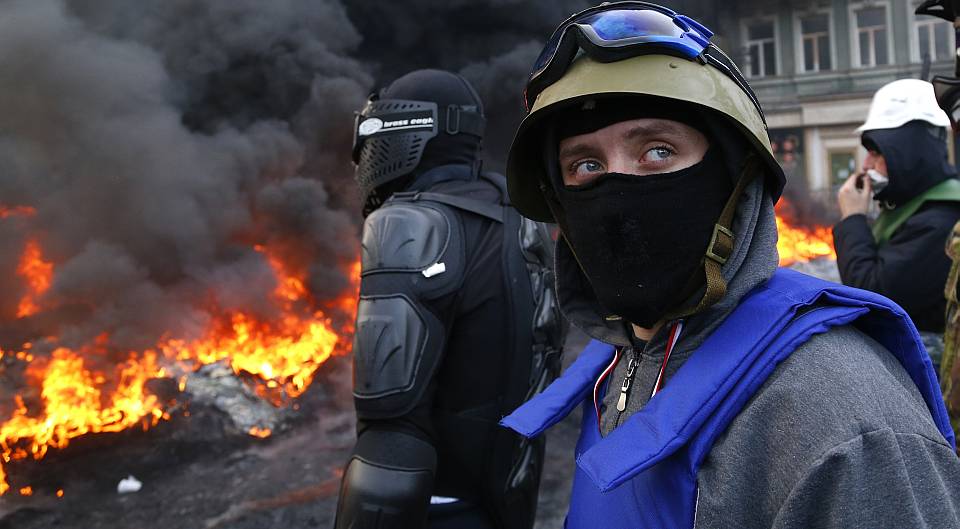 The confrontation between Russia and the West over Ukraine has intensified quickly. Pro-Russian forces took de facto control of Crimea, a largely Russian-speaking peninsula in southern Ukraine where Russia has long maintained military bases (Russia denied deploying troops). The parliament in Crimea voted to hold a referendum on whether to secede from Ukraine and become part of Russia, and the leaders of Russia’s parliament said they would support annexing Crimea. The US announced visa bans on Russian officials, and threatened other sanctions, while European leaders indicated that they might join the Americans.

Western leaders denounced Russia’s grip on Crimea and called on Russian president Vladimir Putin to pull back his forces from the region. US president Barack Obama condemned Russia’s actions, calling them a ‘violation of Ukrainian sovereignty and territorial integrity’, as well as ‘a breach of international law’. According to Obama, Russia’s military manoeuvres in Crimea were a throwback to the past: ‘In 2014, we are well beyond the days when borders can be redrawn over the heads of democratic leaders.’

US secretary of state John Kerry called Putin’s move ‘a nineteenth-century act in the twenty-first century’.

The US and other Western powers display real chutzpah in claiming to have principled objections to Russia’s influence in Ukraine. ‘Territorial integrity’? The US and its NATO allies deployed bombs to help bring about the break-up of the Former Yugoslavia in the 1990s, including creating an independent Kosovo. From South Sudan to Eritrea to East Timor, the West backs separation. This is not a question of ancient history, as Obama and Kerry would have it – these examples are all very recent.

The US is concerned about ‘sovereignty’? That’s news. In the twenty-first century alone (not Kerry’s nineteenth century), we have seen the West override national sovereignty in Afghanistan, Iraq and Libya, to name the most obvious examples. Go back a few decades further, and you have US/Western violations of sovereignty in Panama, Grenada and the aforementioned Former Yugoslavia.

Many Western leaders consider Putin’s actions scarily reminiscent of old-style excuses for militarism and invasions, citing comparisons with Hitler in the Second World War. ‘Now if this sounds familiar, it’s what Hitler did back in the 1930s’, said former US secretary of state Hillary Clinton. ‘All the Germans that were… the ethnic Germans, the Germans by ancestry who were in places like Czechoslovakia and Romania and other places, Hitler kept saying they’re not being treated right. I must go and protect my people, and that’s what’s gotten everybody so nervous.’ Clinton was referring to Russia’s claim that it seeks to protect human rights in Ukraine. As Sergey Lavrov, Russia’s foreign minister, has said, ‘We are talking here about protection of our citizens and compatriots, about protection of the most fundamental of the human rights – the right to live, and nothing more.’

But the Kremlin would not have to revisit Hitler’s Anschluss of 1938 to find inspiration. In asserting that human rights trump national sovereignty, Russia is only continuing a major theme promoted by the West for decades. When Russia cites the aim of ‘protecting’ people, it echoes the doctrine of ‘responsibility to protect’, which American and European advocates have used for years to justify intervention in other countries. First conceived following the war in Kosovo, the R2P doctrine argues that intervention on humanitarian grounds, even without approval from the United Nations Security Council, does not contravene international law.

It is clear that the US and Europe are self-serving when it comes to territorial integrity and sovereignty: they are for such principles when it suits their interests, and they can ditch those ideas when they are obstacles to pursuing their interests. Indeed, if Russia or other countries feel they can ride roughshod over ‘territorial integrity’ and ‘sovereignty’, you can thank the West for spending recent decades doing more than anyone else to undermine those concepts.

But it is not just that the Western powers are hypocrites for spouting the principle of sovereignty, when they have consistently violated that principle. It is not simply a case of doing so in places other than Ukraine many years ago. Right now, the US and EU, despite all of their talk of ‘standing by the Ukrainian people’, are actively undermining Ukrainian self-determination. The Western powers may not have troops on the ground, as Russia does, but their activities encroach upon Ukraine’s national sovereignty.

With its moves before President Viktor Yanukovich was deposed, the West tilted the balance of power in Ukraine towards the protesters. The EU raised expectations among the Ukrainian opposition, but then its hard bargaining on a free-trade agreement, including placing conditions that required changes to Ukraine’s electoral and justice system, pulled the rug out and turned trade negotiations into a crisis. In an uncommon show of support, European and American politicians joined the protesters on the streets of Kiev. In a country that was divided, the West threw its weight behind one side, lending legitimacy to the protesters and delegitimising Yanukovich.

Once Yanukovich fled, the foreign ministers of Germany, France and Poland negotiated with the opposition leaders to tear up Ukraine’s constitution. The new leaders of Ukraine now look West for validation and support: both Yulia Tymoshenko and Vitali Klitschko have been in close contact with Germany’s chancellor Angela Merkel. John Kerry landed in Kiev this week to support the protesters and the new leaders.

The underlying issue is that Ukraine does not have a history of stability, and encompasses many competing peoples and interests. As Jack Matlock, former US ambassador to the Soviet Union, explains: ‘The fact is, Ukraine is a state but not yet a nation. In the 22-plus years of its independence, it has not yet found a leader who can unite its citizens in a shared concept of Ukrainian identity. Yes, Russia has interfered, but it is not Russian interference that has created Ukrainian disunity but rather the haphazard way the country was assembled from parts that were not always mutually compatible.’

And yet rather than stand back and allow Ukrainians to find their way to unity, the West has now picked one side. From statements of support to hands-on assistance, the West has conferred legitimacy on the new government, even though this new regime does not have electoral authority (and came into being by overthrowing an elected government). Predominantly reflecting western Ukraine, the new leaders have also revealed a sectarian aspect: they’ve undertaken autocratic moves in Russian-speaking eastern Ukraine, such as imposing oligarchs to run local government offices and passing legislation that outlaws the use of the Russian language in a government context (which was later overturned).

Europe and the US are not simply neutral observers in Ukraine. By their sheer weight in world politics alone, once the West throws its support behind one side in a contested civil conflict, they have the power to distort the internal affairs of that country. Since the overthrow and Russia’s moves in Crimea, the opposition has called on the West to take more forceful action against Russia.

As it happens, in response to Crimea, the US has upped its military presence in the region, and thus escalated tensions (despite its claims that it seeks to de-escalate). The Pentagon has increased military training operations in Poland and sent fighter jets to patrol the skies over Lithuania, Latvia and Estonia. And as a retired US army officer who leads back-channel talks with Russia told the New York Times, ‘military movements could backfire by misleading Ukrainians into thinking the West might come to their rescue and so inadvertently encourage them to be more provocative with Russia’.

The West highlights the desire among the protesters and opposition politicians for liberal democracy and closer ties to Europe and the West as a justification for its support. As many have identified, including me, this rosy perspective overlooks how the opposition consists of a strong component of neo-Nazis and nationalists mixed in with true liberals (you don’t have to buy the Kremlin’s propaganda that they are all fascists to see that this authoritarian strain exists). Furthermore, these groups seized power by overthrowing an elected government (when Tymoshenko says that the upcoming secession vote in Crimea will be illegitimate because it will be a ‘referendum under Kalashnikovs’, you have to wonder why that is worse than her coming to power via AK-47s and no ballot). But the overriding point is this: even if the opposition was led by John Stuart Mill and Mother Teresa, interference from Western powers is a negation of democracy. Whatever the motives, such interference is a violation of self-determination.

Pointing out the West’s history of trashing sovereignty does not justify Russia’s show of force in Crimea. Indeed, when Putin effectively argues ‘So what? The West does it too’, he gives up the anti-intervention high ground he has tried to occupy in relation to Syria and other disputes. Losing that authority is not an inconsiderable cost for Russia to pay in global affairs, and is an indication of how the Kremlin views the developments in Ukraine and Crimea as existential threats. That said, given its history of playing fast and loose with ‘sovereignty’ – and its interventions in Ukraine today – the West has no moral authority in challenging Russian moves in Crimea by invoking the concept.

The situation in Ukraine raises a host of complicated and thorny issues. But the principle at stake is a very simple and straightforward one: self-determination for the people of Ukraine.