Philip Lymbery's arguments against industrialised food are hard to swallow. 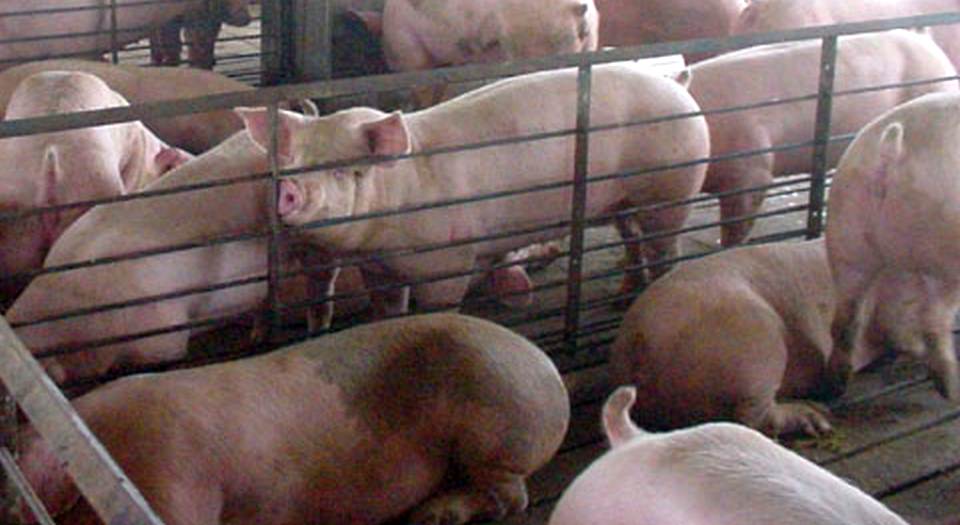 At 365 pages, Farmageddon: The True Cost of Cheap Meat is a long book that says very little. The views expressed by the main author, Philip Lymbery, chief executive of campaign group Compassion in World Farming, will be familiar to anyone who has read any of a long list of books bemoaning modern farming and food production by the likes of John Humphrys, Raj Patel, Felicity Lawrence and Joanna Blythman.

Farmageddon is a difficult book to read and to review. It is difficult to read because the author clearly fancies himself as a novelist and, as this is not a novel, it’s annoying to have to wade through pages of flowery language describing sunsets, birdsong and childhood reminiscences before any sort of point is made. It is difficult to review because, while it is a polemic against factory farming, it contains little in the way of actual argument. Lymbery describes at length the unforeseen problems caused by industrialised agriculture – fertiliser run-off, water contamination and air pollution, to name just three. But the fundamental point of the book is to express a sense of detachment from modern society, a longing for a simpler way of life, which Lymbery feels has been lost to corporate greed – a life before concentrated animal feeding operations (CAFOs), where everyone was happy, or at least happier, with their lot.

For Lymbery, the rot started in the UK with the passing of the 1947 Agriculture Act. In the US, the 1933 Farm Bill is the point where society apparently diverged from the path of righteousness. In both countries, where once mixed farms dotted the countryside, farming became an industry. Farmers specialised: one farm concentrated on dairy, another on beef, another on wheat, and so on. So what is Lymbery’s issue with this logical division of labour, designed to increase productivity and end postwar food rationing? The age-old natural cycle, where crops and animals would rotate to replenish the soil, was lost, he says. Chemicals were used to fertilise land instead.

The sentiment Lymbery wishes to convey is that nature is ‘out of balance’, that society has gone too far in the wrong direction. His premise is that we need to relearn traditional wisdom. His job in this book is to be the prophet that saves us from ourselves. His scripture is Silent Spring, Rachel Carson’s 1960s tract on the perils of pesticides. Lymbery describes visiting Carson’s childhood home, though only, it seems, so he can walk to the top of the hill at the back of the house and witness man’s folly: a factory where once there were meadows. Like Carson, he is a romantic, in the sense of the nineteenth-century reaction against the Enlightenment. Unfortunately, as his prose confirms, he is no Mary Shelley.

Here’s a flavour: ‘Along with colleagues, I spent a lot of time amassing scientific evidence to prove what seems perfectly obvious to me: that hens and other farm animals… can experience pain, fear, pleasure and excitement much in the way that we do. As many as half a million people in Britain now keep hens in their garden, and I doubt many of them would question this. They can see that what happens to these complex creatures matters to them. They can see how much it means to them to feel dust under their feathers, the sun on their wings, the soil beneath their feet. I am certain this isn’t just sentimentality. People who keep chickens and other animals for pleasure, like our pet dogs and cats, often have an instinctive connection with their animals. I certainly don’t feel the need to be anthropomorphic – to project human feelings on to animals, hens or others… [but] I could see that each was an individual with her own personality. By winter we had four… Hetty, Henna, Honey and Hope.’ Despite his protestations, Lymbery reveals sentimentality in spades.

One chapter offers a microcosm of Lymbery’s outlook, where he discusses one of the hot topics of the moment among green-tinged foodies: disappearing bees. As everyone knows, bees play an important role in agriculture by pollinating crops. One place where bees are particularly important is Central Valley in California. Over 70 per cent of the world’s almond crop is produced here on 600 square kilometres of land which, until the launch of two major irrigation projects in the early- and mid-twentieth century, was semi-arid, desert grassland, marsh, wetland, forest and prairie. On less than one per cent of the total farmland in the United States, the Central Valley now produces eight per cent of the nation’s agricultural output by value. This phenomenal achievement is, according to Lymbery, not so good if you’re a bee. He argues that a combination of crop specialisation, agricultural intensification and the use of chemical pesticides has decimated their nesting sites and poisoned them. This has led to the development of what Lymbery describes as a bizarre new industry: pollination services.

Lymbery estimates that every year around 40 billion bees are transported to California from as far afield as Australia in order to pollinate the unnatural, chemically toxic Central Valley. In any other period in history, this feat of logistical ingenuity would surely be celebrated as yet another achievement in man’s mastery of nature. For Lymbery, however, it shows that bees – like chickens, cows and pigs – are victims of an out-of-control system that will lead to ‘farmageddon’ and eventually mass starvation.

Lymbery’s assertion that factory farming is responsible for the disappearance of bees is jumping the gun a bit, to say to the least. Despite considerable resources being put into research on colony-collapse disorder (CCD), as yet there are no conclusive answers. While the stress caused to bees by their hives being moved long distances is one area researchers are looking into, there are many others. Mites that generally feed on bees, such as the Varroa and Tracheal mites, may be exposing the bees to an unknown virus. Some unknown pathogen or other factor may be affecting bees’ ability to navigate. Honeybees may have too little genetic diversity, making the species as a whole susceptible to widespread disease. Until recently, it was thought that electromagnetic energy from cordless-phone bases or cellphones was to blame for screwing up bees’ navigation. This theory is now considered unlikely.

Nor is this the first time that the population of honeybees has declined suddenly and unexpectedly. The populations of individual colonies can decline sharply during the winter as bees naturally die. In addition, beekeepers have reported sharp decreases in their hive populations several times in the past hundred years. In 1915, beekeepers in several US states reported substantial bee losses. The condition became known as Disappearing Disease – not because the bees disappeared, but because the condition was self-limiting and did not reoccur.

In the final chapter of Farmageddon, Lymbery points out all the things to do if you want to make a change. It’s a collection of the usual middle-class consumerist tactics familiar to anyone who has been in a university students’ union in the past 40 years: change starts with individual behaviour. Where South African grapes once represented the boycott de jour, now buying local, free-range and organic is the indicator of caring moral superiority. He waits until the epilogue, on page 358, to give us the most sensible sentence in the whole book: ‘About 11 billion people could be fed on what the world currently produces, many more than today’s seven billion.’ Hear, hear.

Insofar as Farmageddon details the thought processes of someone clearly in the thick of it when it comes to the modern existential crisis at the heart of society, it is a useful read. It could easily have been 200 pages shorter, however. Anyone interested in more substantial arguments against industrialised agriculture – if only to understand the shortcomings of this worldview – would do better looking elsewhere in the ever-expanding crop of such downbeat, anti-modern books.

Jason Smith is judges coordinator for the UK Debating Matters competition, a freelance journalist writing on food, farming and civil liberties, and co-founder of the public forum, Birmingham Salon.

Farmageddon: The True Cost of Cheap Meat, by Philip Lymbery with Isabel Oakenshott, is published by Bloomsbury. (Buy this book from Amazon(UK).)