The collapse of Jared Diamond 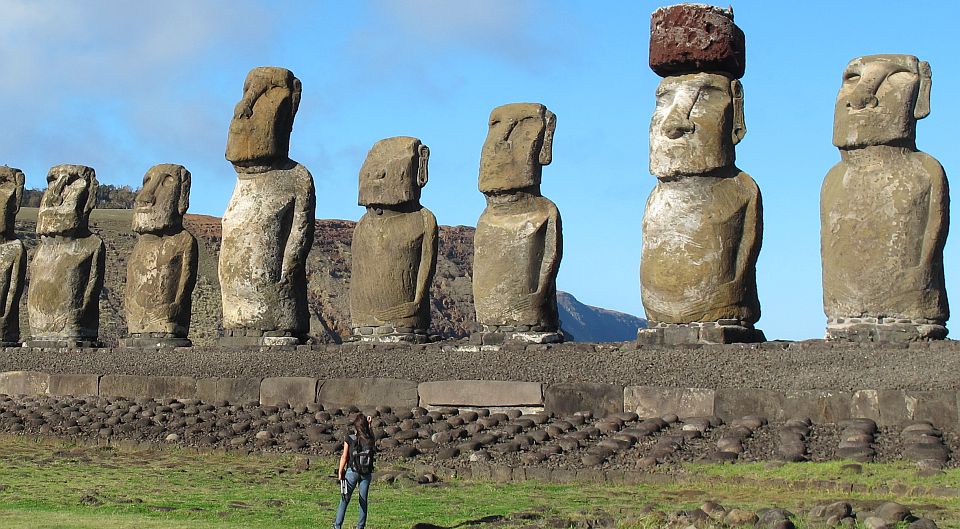 On Easter Sunday 1722, a Dutch expedition to the South Pacific in search of the mythical continent of Terra Australis approached one of the most remote islands in the world. Jacob Roggeveen, the expedition leader, gave it the name of Easter Island. After coming ashore with a landing party and summarily massacring a dozen or so curious natives within minutes of their arrival, Roggeveen took time to explore the island. It was unlike anywhere he had ever been. Unusually for the South Pacific it was almost entirely devoid of trees. The Island’s people seemed to have a materially undeveloped society, with Roggeveen noting that they lacked rudimentary cooking vessels and earthen pots, cooking their food on hot stones instead. He assumed that they subsisted largely on fish but their canoes were leaky and could not support more than two people. Yet, as the island was dotted with hundreds of colossal statues known as Moai, there was evidence that a more complex civilisation had once existed.

Initially Roggeveen did not believe that the seemingly primitive islanders could have constructed them. He wrote in his log: ‘[T]hese stone figures caused us to be filled with wonder, for we could not understand how it was possible that people who are destitute of heavy or thick timber, and also of stout cordage, out of which to construct gear, had been able to erect them; nevertheless some of these statues were 30 feet in height and broad in proportion.’

Ever since Roggeveen’s return, Easter Island (now known by its Polynesian name Rapa Nui) has fascinated people around the world. What had happened there prior to the arrival of the first Europeans?

In 2005, Jared Diamond published the bestselling Collapse: How Societies Choose to Fail or Succeed, a book which quickly became essential reading across a range of academic disciplines. Diamond argued that, historically, societies have collapsed because as human population expands, and people begin to demand a more and more lavish material existence, this puts unsustainable pressure on natural resources. The end result is catastrophe. Diamond adds that these factors are often exacerbated by changes in climate. We must learn from this, he warns, or our society will soon meet a similar fate to those who have gone before us.

The collapse of complex civilisation on Rapa Nui is a central case study in Collapse. It is an example, Diamond argues, of a society whose collapse was entirely due to ‘ecological suicide’. By invoking suicide, Diamond asserts that the collapse of civilisation on Rapa Nui was down to the deliberate and foolish acts of its inhabitants. ‘How much past environmental damage was unintentional and imperceptible’, he writes, ‘and how much was perversely wrought by people acting in full awareness of the consequences? For instance, what were Easter Islanders saying as they cut down the last tree on their island?’

In Diamond’s version of events, the great Moai statues stand as a testament to the islanders’ hubris and greed. He cites the fact that the size of Moai grew over time, demonstrating a destructive cycle of one-upmanship which could only end in disaster.

Like the Tower of Babel, the islanders’ greatest achievement was to foreshadow their imminent demise. Once the island’s resources had been exhausted by the Moai-building frenzy, Rapa Nui rapidly descended into famine, civil war and cannibalism. Within a generation the population had fallen by 80 per cent, with the remaining inhabitants eking out a miserable existence living in caves on the shoreline with the interior of the Island abandoned. This supposedly accounts for the state of the society as Roggeveen found it.

Diamond’s thesis had gone largely unchallenged until recently when anthropologist Dr Mara Mulrooney from Bernice Pauahi Bishop Museum in Honolulu, Hawaii, published the findings of her six-year study of Rapa Nui’s archaeology entitled Continuity or Collapse?. Mulrooney found that, far from being abandoned, the interior of the island had gone through something of an agricultural revolution at some point in Rapa Nui’s history, making it more productive than it had ever been before. This may have resulted in less dependency on fishing and hunting which are unreliable sources of food because they depend on the whims of nature. Diamond had therefore been wrong to assume that deforestation and the fact that the islanders ceased to construct Moai had marked the end of the Rapa Nui civilisation; it had simply entered a new, and perhaps, more innovative phase.

Mulrooney argues that what really happened on Rapa Nui is a story of ‘continuity rather than collapse’. The use of the island as a heavy-handed allegory for man’s destruction of the planet is simply wrong. In fact, as Mulrooney writes: ‘Rapa Nui should be the poster-child of how human ingenuity can result in success, rather than failure.’ Mulrooney now believes that Rapa Nui’s population only went into decline after European contact bringing with it diseases to which the Rapa Nui people had no immunity. Roggeveen’s account, it seems, was inaccurate. By his own admission he spent very little time on the island and his fear of its inhabitants limited his movements. Also, the accounts of adventurers of his age were infamous for self-serving embellishment, each trying to outdo their peers in the strangeness of the peoples they encountered. In short, his observations about the culture of Rapa Nui cannot be trusted.

Diamond’s view of human societies assumes that when a particular resource is depleted, the Four Horsemen are never far away. This is an extremely simplistic worldview. Human societies have always been resilient and have a remarkable ability to adapt to their changing environments. Historically, when a resource has been depleted, more often than not, societies have found an alternative rather than simply choosing to commit societal Hari Kari as Diamond would have us believe. In Europe, when forests could no longer meet our fuel needs, we moved on to coal, and then on to oil and someday we will move on to something else. And this it seems was the case on Rapa Nui: The islanders did not commit some kind of mass ecological suicide when the last tree was felled; they simply adapted and got on with things as the human race has done throughout history.