Chaos in Kiev: a mess made by the West 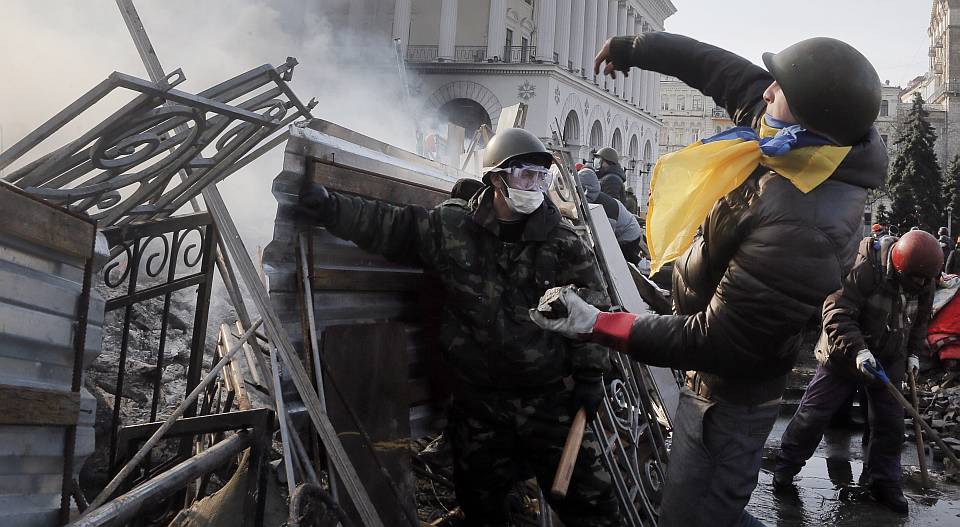 With more than 70 Ukrainian protesters dead and Kiev in flames, many Western observers are fantasising that it was all in a good cause. They’re depicting the violent clashes as a rerun of the Cold War, a coming-back-to-life of that conflict over values that split the world between West and East, between the democratic and the autocratic, for most of the postwar period. On the blood-stained streets of Ukraine we have youth fighting for ‘fundamental European values‘ and ‘defying the post-Soviet order imposed by Russia‘, we are told. This is apparently a battle to create a Western-style ‘free, sovereign, democratic country‘ and to wriggle free of Russia’s baleful illiberal influence. It’s a war between Western principles and Eastern authoritarianism.

Such a reading of the streetfighting in Ukraine gets two things spectacularly – and tragically – wrong. Its assumption that the old Western values of liberal democracy and freedom are not only alive and thriving but spreading Eastwards runs counter to every fact of recent times, when, in Brussels in particular, which is doing most of the Cold War talk over Ukraine, democracy has become a dirty word and our new rulers have lost the ability even to spell the word freedom. And its suggestion that Western leaders are (or most certainly should be) influencing Ukrainian events in the right direction, by supporting those who are on ‘the right side of history’, imbues Western foreign policy with a sentience and purpose it simply does not possess. It gives the impression that the West worked out what is best for Ukraine and then set about making it happen. In truth, the violent instability in Ukraine speaks to the lethal illiteracy of Western foreign policy today, to the inability of Western politicians to behave in a geopolitically grown-up fashion, to the deadly impact that dumb diplomacy can have on those nations who find themselves on the receiving end of its diktats.

The West is not engaged in any clear, conscious project to export democratic values or anything else to Ukraine. Rather, it has meddled thoughtlessly in that divided country, being guided more by fleeting PR needs than by age-old Enlightenment principles, and the consequences have been disastrous. Over the past three months, Western politicians have continually upped the ante in the Ukrainian theatre, through conferring moral authority on to the protest camps (without giving a moment’s thought to the political nature or quality of said camps) and through isolating and finally delegitimising President Viktor Yanukovich. This has had the terrible impact of deepening the divide between the two blocs, making compromise all but impossible, and violence inevitable.

What started as a fairly minor spat over an EU agreement on trade, which Yanukovich refused to sign, making EU-leaning Ukrainians angry, has been transformed by the infantile interference of Western politicians into a fiercely violent clash between various sections of Ukrainian society. In essence, Western politicians made the protest camps into the legitimate government of Ukraine, handing them a moral mandate to behave as they pleased. Both American and German politicians took the extraordinary step of visiting the camps and imploring their inhabitants to continue fighting for a more European Ukraine. In December, the German foreign minister, Guido Westerwelle, told the protesters it was clear ‘the hearts of the people of Ukraine beat for the EU’. American Republican senator John McCain also visited the camps. ‘We are here to support your just cause’, he said.

In January, various Western leaders started to talk about the protesters as if they were the true embodiment of the Ukrainian popular will. German chancellor Angela Merkel told her parliament that the protesters are ‘fighting for the same values that guide the European Union and that is why they must be supported’. US secretary of state John Kerry declared that ‘the United States stands with [the protesters]’. In the wake of such statements from global leaders, the protesters started to storm and claim authority over institutions such as Kiev’s City Hall and the Ministry of Justice. That wasn’t surprising – having effectively been handed the status of Ukraine’s true rulers by powerful outside forces, they were assuming their positions of Merkel-mandated governorship.

Western leaders went further this month and held actual official meetings with the protesters’ political leaders, in a not dissimilar fashion to their handpicking of and meeting with those they deem to be the ‘legitimate representatives’ of wartorn Syria. On Monday this week, Merkel met with Ukrainian politician and de facto spokesman for the upheaval, Vitali Klitschko, who later said he was ‘very pleased with the course of the discussions’ he is having with Western politicians, who are working to make Ukraine ‘a political and economically stable country’.

It is not surprising that the most serious violence followed just days later. Merkel’s latest round of interference, alongside that of Kerry, McCain, French President Francois Hollande, and even US President Barack Obama – who has praised the protesters for having a ‘very different view and vision of their country‘ to Yanukovich’s – pushed the situation in Ukraine to the edge. It both emboldened the protesters, whose brazenness and storming of government buildings has risen in direct proportion to the issuing of pro-protest statements by Western leaders, and it isolated President Yanukovich, transforming him, effectively, into an illegitimate ruler who has a ‘very different view’ to the good protesters, to use Obama’s words. As a consequence of three months of intense Western meddling, a scrap over trade came to be intensely internationalised, transformed from a pretty straightforward disagreement between political leaders and a section of their population into a stand-off over political legitimacy itself, over who rules Ukraine, where the protesters derived their moral authority almost entirely from Western leaders rather from the Ukrainian masses while the newly made pariah Yanukovich was forced ever closer into the arms of Russia. Compromise was possible on the practical question of trade; it was not possible on the more existential question of who is in charge of Ukraine. Authorised by the West, the protesters chanced their hand and seized government buildings or communicated their determination to stay put in their camps pretty much forever; delegitimised by the West, Yanukovich felt a powerful need to assert his political authority over Ukraine. The predictable end result was bloodshed, executed by Ukrainian riot police, authored by the EU and Washington.

Of course, history is littered with instances of Western leaders and foreign-policy establishments choosing one side against another in volatile countries around the world and unleashing conflict in the process. But what is different today, in Ukraine, and also in places like Syria, is how incredibly amateurish, kneejerk and ill-thought-through such Western interference has become. In the past, when foreign policy analysts and diplomats had some sense of what their nation’s interests were and how such interests might be carefully and, where necessary, ruthlessly pursued in the global arena, careful thought was given to engagement and action in foreign fields: groundwork was done; political groups were sussed out and cultivated; relationships were developed. In Ukraine, by contrast, Western leaders conferred almost instantaneous political legitimacy on to an ill-organised Occupy-style camp that has its fair share of eccentric protesters, including extreme right-wing groups and anti-Semites, and they seem to have given no thought whatsoever, far less analytical resources, to what were likely to be the consequences of their actions. So now they are alarmed that there is seriously violent conflict in a European country and they are punishing Ukrainian leaders with sanctions.

As a result of a hollowing-out of Western foreign policy, of the death of serious Western engagement in world affairs and its replacement by a diplomacy that has more in common with the short-term politics of spin than with the interest-driven politics of empire, Western governments now frequently pursue courses of action that end up both destabilising foreign countries and harming their own interests in the long term. For Western politicians to do such things in Syria, where they have also intensified conflict by handpicking a new ‘legitimate government’ and thoroughly isolating the country’s ruler, is bad enough; but for them to do something similar, if mercifully smaller-scaled, in Europe, on their own continent, in their own backyard, points to an extraordinary disconnect between what is in their national interests and how they actually behave. Ukraine is now at serious risk of becoming more deeply divided between west and east, urban and rural, Ukrainian and Russian-speakers, and the European continent has serious conflict on it – not something that is remotely beneficial to Brussels or Washington.

Yet rather than get to grips with the new dangerous dynamics in Western foreign policy, observers try to force the Merkel-stoked, Kerry-okayed chaos in Ukraine into an old, familiar-feeling script: it’s the Cold War again, they say, this time on steroids, with liberal democracy having yet another shocking showdown with Eastern wickedness. More radical commentators will say that the real driver of the conflict is the need of the West, particularly the EU, to pursue its economic or free-market interests in Eastern fields, which makes exactly the same mistake as the panto Cold War re-enactors do – it imbues what is in truth a scarily senseless foreign policy with purpose, meaning, design.

The freedom-vs-Eastern-authoritarianism script being projected on to the mess of Ukraine is wrong in terms of both content and practice. Content wise, are we meant seriously to believe that the EU is committed to liberal democracy and freedom? This vast oligarchical institution that insulates itself at every opportunity it gets from electorates and thinks nothing of so stringently qualifying liberties like freedom of speech that they become meaningless? The EU doesn’t believe in democracy or liberty for French people or Italians or the Irish – why should we believe it wants to export such values to Ukrainians? And practice wise, there is nothing whatsoever to suggest that the West has consciously set up a battle of ideas or values with its ideological enemies on the territory of Ukraine, and everything to suggest that actually it has simply poked and prodded and casually pontificated about a volatile nation in the East and is now shocked to find that its actions have had consequences – dire ones.